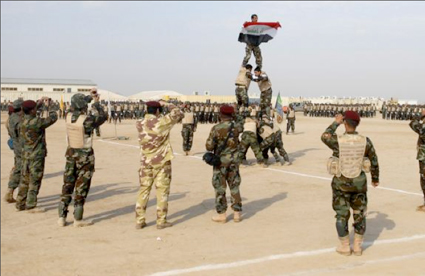 King lost his foot in Iraq to an explosively formed projectile, a weapon that can go through armored trucks.

“We as Soldiers would rather have the improvised explosive devices hit than an EFP,” King said. “Those are really dangerous.”

The cadets are designing, building and testing a below-the-knee active prosthesis to replicate the foot-ankle movement of a natural foot.

The cadets worked on and then started to gather materials and manufacturing pieces. Screws and brass nuts were bought from the outside vendors.

The project took about six months to complete.

“At this point, the foot does need electricity and to be plugged into a computer,” Marshall said. “We are trying to reduce the components so amputees are able to walk. At some point, (an amputee) can use a small portable system.”

King is the first to try the bionic foot, which he heard about through a prosthetic technician at Walter Reed Army Medical Center. He decided he would like to help with the project, if not for himself then for someone else.

“This is the first year of a multiyear project,” Lt. Col. Joe Hitt, assistant professor in the CME dept. and faculty advisor, said. “This project will culminate with a walk-run device that Soldiers can use in and out of the field.”

Hitt said the system will be tested by three military amputees as part of approved clinical trials.

“The goal is to improve the Soldiers’ metabolic efficiency and produce a more symmetric and comfortable gait compared to wearing a conventional, passive prosthesis,” he explained.

King tried the foot on a treadmill.

“Its light enough and I can feel the ankle and the side to side movement,” he said. “I’m not used to that; not having that freedom.”

The cadets noticed a certain amount of wobbling and took the foot back to the fabricating area to readjust the foot.

“It is a challenge,” Jones said. “Everything is so tightly compacted that it makes it hard to get to everything, like the screws.”

King is enjoying being part of the team and is willing to do whatever he can to help.

“I would love my foot back, but I can deal with it,” he said. “If I can help another person down the road, that will be great.”