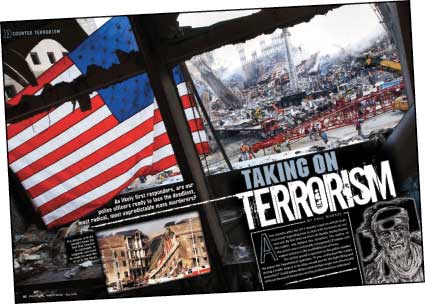 If you care to poke into the annals of military history enough, one of the things you’ll soon discover is the repetition of this warning: No battle is ever the same as those that have gone before.  Waterloo, Gettysburg, Iwo Jima, Porkchop Hill, or Fallujah—You can study them until your eyes bleed, and the lessons learned will not, by themselves, prepare you for the next time the @!*# hits the fan.

There was Pan Am Flight 103 blown up over Scotland in 1988, then Muslims tried to blow up the World Trade Center in 1993. The attack failed, but who thought they would be back and pull off what they did on 9/11? There was Columbine, then along came Virginia Tech.

For today’s professionals, military and law enforcement, expecting the unexpected is definitely the name of the game. Of course, it’s not a game, but a deadly serious business of defending our communities and our country itself. And if you’re on duty, only a high level of combat readiness and gear will see you through the fight, whether you’re up against a punk with a knife or gun or a pack of well-armed terrorists you’re about to send off to those “celestial virgins” they seem to covet.

What if…indeed! How will the fight develop? What will the threat be? A lunatic running around with a gun shooting people? An armed and dangerous criminal at the wheel of a fast car? Terrorists trying to plant bombs? A hostile army attacking a neighboring country?

If you’re in uniform today, you’re fully aware of the consequences of any threat, these and thousands more. And you have no child-like illusion of being Superman or Superwoman. On the other hand, you’ve been training toward the ultimate degree of readiness and skill in your particular job—as have other members of your law enforcement or military team—and you’re using the best firepower and equipment out there. You feel confident.  When “What If…?” comes, you’ll be ready.

This May 2008 issue of TACTICAL WEAPONS reflects the versatility of training and decisive firepower professionals need and are using to protect local communities and the nation itself against nightmarish evils that can come anytime, anywhere, and in many ways.

We mentioned VA Tech and Columbine. The Russians suffered a horrific school massacre, close to 350  dead, 700 plus injured, and they’re training and arming to never let it happen again. While on the LE beat, we’d like to mention our coverage of stopping “Hyper Violent” madmen—the kind who thrive on ambushing cops, with absolutely “nothing to lose” in regards to their own life. We also take aim at handling “hot pursuit” suspects who turn their vehicles into mobile fortresses. We’ll show you Border Patrol’s corps for canine training and handling the mounting challenges, plus we take a look at a new OC spray gun, the JPX Jet Protector. One AZ Sheriff’s department has made it their new choice of less-lethal tool for their most violent jailhouse offenders.

As always, we have the latest on important new guns and ammo, including the Marine’s semi-auto sniper rifle, the MK-11 MOD 1 SRS, in action in Iraq; S&W’s Military/Law Enforcement .45 with ambidextrous safety; the new-age “submachine gun,” the Kriss V .45; and a study on replacing the 5.56mm NATO round with 6.5 Grendel or 6.8 SPC.

You’ve seen many movie scenes of pirates boarding ships, but wait until you see our Sea Warriors training in techniques to board terrorist vessels.

You might be surprised by some of the tactics and gear that help the pros in their fight. For instance, there’s the Caterpillar Bulldozer. No, it’s not like the one making noise building a house across your street. It’s a beast, called the Modified D9, and nothing (almost nothing!) can kill it.

And, as they say on TV, stay tuned, there’s lots more coming. Hop on board. Be ready for anything! 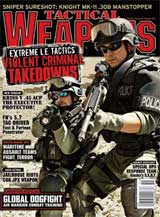 If you care to poke into the annals of military history enough, one of…