The conventional wisdom is that Cape buffalo do not charge in pairs, but clearly these two never got the memo.

I was hunting with a PR director for a major gun company and she had wounded a bull a few minutes earlier. It had run up the hill where another bull, sensing his weakness, had started to fight him for dominance. The roaring and bellowing had our attention and when the first bull decided he had enough and was going to come back to pound on the one that caused it all, we were watching. 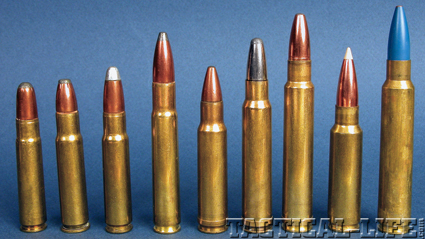 We were in the wide open—with no place to run—when the two bulls broke cover about 50 yards away. They were running down a slight incline, which helped increase their speed, and they were focused on us like a laser beam. Hunting etiquette caused me to keep my finger off the trigger, as the lead bull was spewing blood from his mouth and side—clearly the wounded buff. It wasn’t my shot, but as they came closer and closer with no response from my hunting companion, I was starting to get a bit nervous. I was not about to be gored in the interest of being polite. The bull was about 20 yards from me and I had about 2.5 pounds off my 3-pound trigger when, finally, her gun spoke. It looked like a miss, but the PH’s .458 Lott roared out of the echo of her shot. The bull’s nose hit the ground and he skidded for several yards, throwing dust and dirt into the air.
The second bull turned to run, then changed his mind and started to turn back at us. “Take him!” the PH hissed into my ringing ears, and so I did. 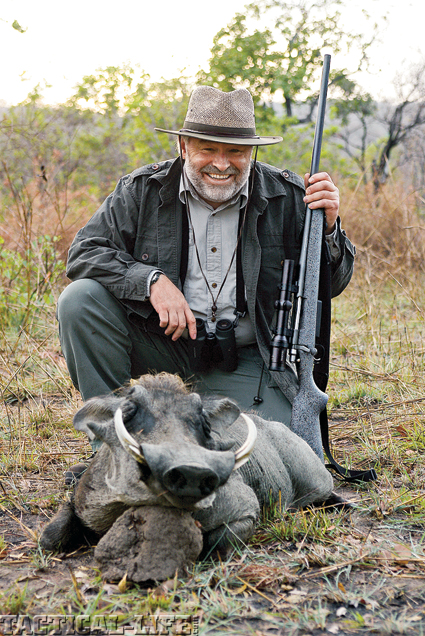 The author with a warthog taken in the Selous Reserve in Tanzania. This was his first kill with the .416 UMT.