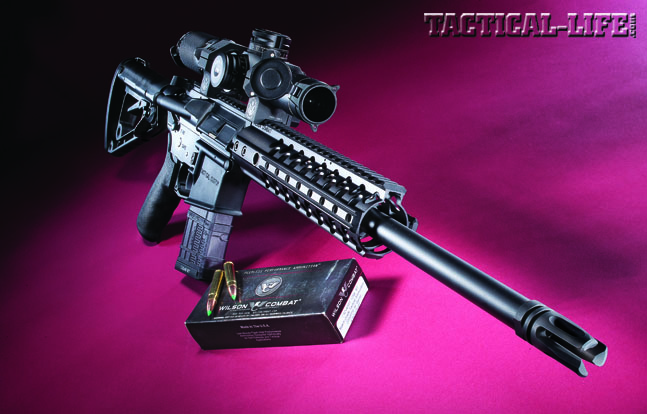 1 of 4
Wilson Combat AR-15 Rifles 1
Wilson’s new 7.62×40 WT is innovation at its best, and more importantly, it works. Loaded in a WC custom rifle, it’ll outperform the rest. 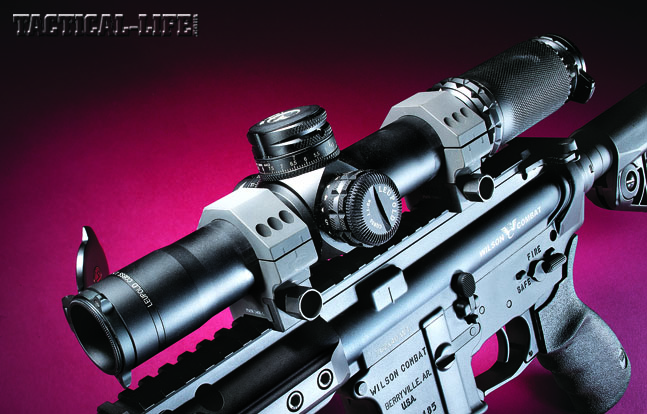 2 of 4
Wilson Combat AR-15 Rifles 2
Wilson Combat uses only the finest materials, and their parts are crafted with great attention to detail. Upper and lower receivers match nicely and are coated with Armor-Tuff for durability. 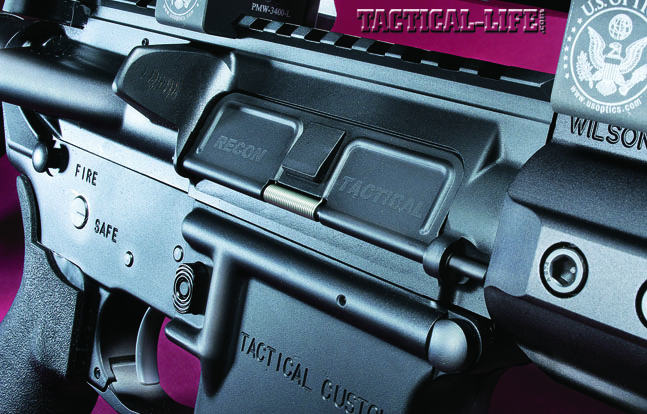 3 of 4
Wilson Combat AR-15 Rifles 3
Wilson Combat uses only the finest materials, and their parts are crafted with great attention to detail. Upper and lower receivers match nicely and are coated with Armor-Tuff for durability. 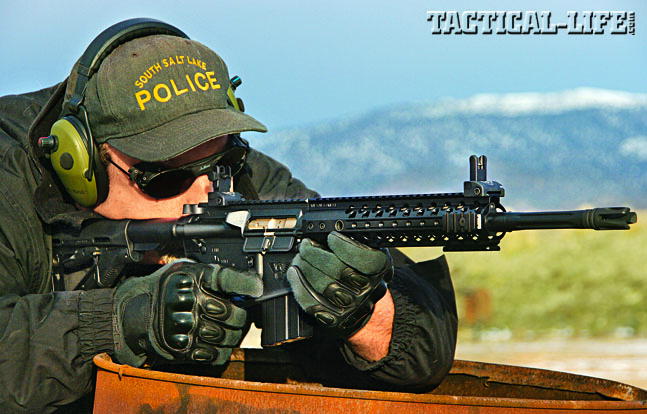 4 of 4
Wilson Combat AR-15 Rifles 4
Rifles built by Wilson Combat are extremely accurate and reliable at the range or on the hunt. 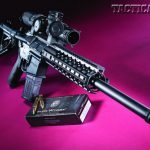 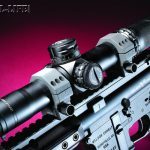 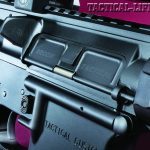 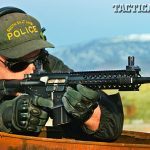 The opportunity to get to know Bill Wilson, John May, and the rest of the crew at Wilson Combat has been a great privilege. It has given me the chance to test some incredibly fine weapons. Wilson Combat is one of the few companies that manages to evolve without the typical loss in either quality or workmanship. Every company has a problem or two, but on the whole, Wilson Combat weapons are amongst the finest you can acquire. This is well known about their pistols, but their custom rifles can get lost in the mix sometimes. Bill Wilson has taken that same drive to improve yet maintain excellence with his rifles.

What started out as a simple deployment carbine has evolved into an entire line of excellent rifles. They range from the simplest carbine to dedicated hunting and precision rifles. One of the few custom makers to truly dedicate time to the 6.8 SPC, Bill Wilson makes several of the finest shooting rifles in that caliber my hands have touched. His latest project, the 7.62×40 WT, is another example of innovation at its best. More importantly, it is an example of the drive Bill Wilson has for building what he believes is best, almost without regard to the prevailing winds. It is a truly American thought process that unfortunately has faded into a growing corporate culture in much of the country.

The 7.62×40 WT
Making the .30-caliber bullet work in an AR utilizing the 5.56x45mm case length has been considered the Holy Grail of black guns. Many different configurations have been tried over the years with varying success—mostly none. Most of the problems have revolved around the magazine, especially if you want to carry anywhere close to full capacity. Platforms that carry only 10 rounds or similar abound. But a .30 caliber that holds close to 20 or 30 rounds and functions reliably has been elusive. Bill Wilson and Wilson Combat may have come up with the best solution so far.

Bill believes in the 7.62×40 WT enough to support it fully, and at this point pretty much alone. Currently, Wilson Combat is the only place you can get this caliber rifle in such variety. It is offered in three configurations: the SBR Tactical, Recon Tactical and the Tactical Hunter. Wilson also offers a matching suppressor, as well as a large selection of ammunition. Like all Wilson weapons, these are built one at a time as a custom rifle with great attention to detail. A recent trip to Wilson Combat allowed me to shoot the SBR Tactical, and a Recon Tactical in 7.62×40 WT spent a good, solid day in my hands at home.

Recon Tactical
The rifle provided for testing was a standard Recon Tactical with a forged upper and lower. It was fitted with a 16-inch match-grade barrel using a six-groove 1-in-12-inch twist. It is threaded 5/8-24 and fitted with an Accu-Tac flash hider. The medium-length gas system was contained in Wilson’s carbine-length T.R.I.M. rail with removable and movable sections. The trigger is Wilson’s excellent TTU with a 4-pound, single-stage pull. The stock is a Rogers/Wilson Super-Stoc, which allows for multiple positions and locks easily into place. The bolt carrier is Mil-Spec and NP3-coated for reliable functioning. Coated in Armor-Tuff, this rifle looks fantastic.

Since this was a new caliber, it was going to be interesting to see how it worked. Knowing Bill, the gun would work or he wouldn’t release it. But new calibers, especially in this platform, always present issues. This rifle uses Lancer’s latest generation of magazines. They are altered slightly for better feeding and round capacity. During testing, the rifle even ran reliably with standard magazines, though they weren’t fully loaded. They would certainly work in a pinch, but if you want complete reliability and full capacity, pick up your magazines from Wilson Combat.

The rifle was completely reliable and functioned perfectly, especially with the supplied magazines. The ammunition supplied by Wilson is excellent and loaded to the highest standards. Most everything they load is about as good as self-defense or hunting ammunition gets. Shooting steel out to 300 yards was almost too easy. Up close, it cut one large hole in the target. With the 125-grain TNT, I managed a 0.88-inch group at 100 yards. The rest of the rounds stayed pretty close to an inch—none of them were outside 1.25 inches. The Recon Tactical truly was a joy to shoot, it seems to be an excellent caliber, and may be perfectly suited for CQB work with a suppressor.

Rifle Line
The accuracy, reliability and complete attention to detail of the 7.62×40 WT is indicative of pretty much every rifle they make. Having tested every rifle they build in 6.8 SPC, they have all been well-built, incredibly accurate and 100 percent reliable. They may be some of the best gas impingement guns on the market. The rest of their line is no less impressive.

The Wilson Combat UT-15 really started it all. A simple tactical carbine, it has all of the features necessary. Utilizing a 16.25-inch barrel, it is perfectly suited to duty, home defense or simple target shooting. The M-4T was designed to meet the needs of those requiring an M4-type barrel. Using all the familiar Wilson Combat custom features, it may be the quintessential M4 Carbine.

The SS-15 Super Sniper may be as accurate as it gets for an AR. Using a 20-inch heavyweight precision barrel, fluted for the proper weight and balance, it is as accurate as this system will allow. This rifle is perfectly suited to duty use, and is really at home for any varmint hunter that is looking for the most precise and lightweight AR rifle out there.

Wilson’s SPR or Special Purpose Rifle is a truly custom-made MK 12 Mod X rifle. Designed as a combat-ready, precision-accurate deployment rifle, it is perfect as a DMR (Designated Marksman’s Rifle), or as a precision 5.56x45mm rifle for law enforcement. It can also be used as a long-range target rifle or varmint hunter as well. Completely reliable, precision accurate and well-balanced, it is one of the best versions of the Mark 12 Mod X you can get.

Wilson Combat offers a couple of excellent choices in the 6.8 SPC line. Over the years, I have tested a couple Recon Tacticals in various configurations, as well as the Lightweight Hunter. They are easily some of the most accurate, most reliable and best-built gas guns available in this caliber. They produce accuracy at the limits of the caliber and any shooter. Whether you need a tactical rifle, a suppressed SBR (Short-Barreled Rifle) version, or just a solid hog hunting rifle, Wilson Combat has what you need.

The latest in the Wilson Combat evolution, the SBR Tactical in 7.62×40 WT uses a short barrel and can be provided with or without a suppressor. The Wilson Combat suppressor is made completely of titanium and offers sound and flash suppression without the extra weight. With the shorter barrel, it gives up little in ballistic efficiency, yet is portable, well-balanced and incredibly accurate. It has proven very effective on the Wilson hog ranch, but would be equally at home as a tactical rifle. The Recon Tactical offers a standard barrel length, handguard and handling familiar to any carbine. Offering superb accuracy and complete reliability, it is a carbine chambered in a truly useful caliber. The Tactical Hunter is the last of the line and is designed for the sportsman or target shooter. Offered without a brake and utilizing an 18- or 20-inch crowned barrel, it provides the excellent ballistic performance and accuracy.

Bright Future
Wilson Combat has always been at the forefront of weapons development. Bill Wilson’s rifles and suppressors are no different. With each year, Wilson Combat provides some of the most practical and innovative rifles available to the operator or sportsman. Wilson has done so while maintaining the highest build quality and some of the best customer service in the industry. We can only look forward to what the future will bring at Wilson, but for now, their present line of rifles may be some of the best available at any price. 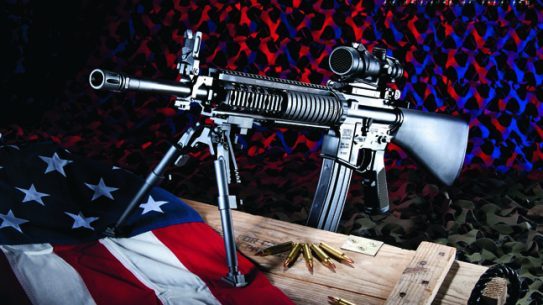