Wilson Combat started by making top-shelf pistols for competition. But over the years, the company has established an award-winning reputation for building some of the best custom-grade rifles available in a variety of chamberings. Before we discuss some of the company’s more well-known ARs, let’s look at Wilson’s newest product line, which melds its pistol and rifle worlds—the 9mm AR9 series.

Wilson Combat wanted its new 9mm rifles to be compatible with common, easy-to-find magazines—the type you might have in the pistol belted to your waist. That’s why the company’s new AR9 series weapons were designed around the magazines used in Glock Gen4, Smith & Wesson M&P and Beretta 92-style pistols.

Being able to use the same magazines between your rifle and pistol makes training infinitely easier and more efficient. One type of ammo will work for two types of weapon systems. What could be easier? 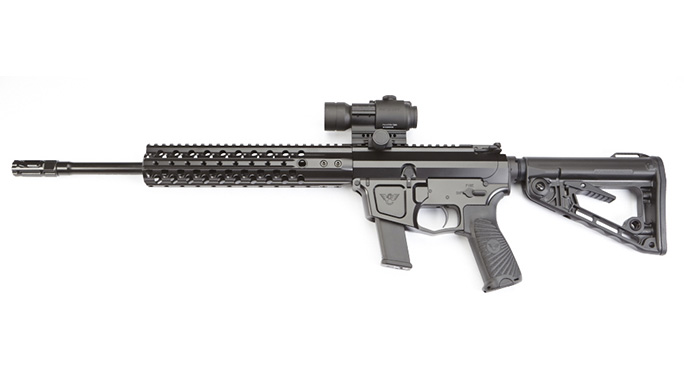 In the past, converting the AR platform to fire 9mm ammo was accomplished by using a magazine well adapter that was compatible with straight magazines. Colt was the first to come out with a 9mm AR using modified Uzi magazines. But the Colt setup was less than ideal in terms of reliability. The trick to making a 9mm AR run consistently is pairing good magazines with a dedicated lower receiver. That is why Wilson Combat designed its AR9 series weapons—available in pistol, carbine and SBR configurations—with dedicated 9mm lowers that accept proven Glock, S&W or Beretta magazines.

Each AR9 is designed for one specific brand of magazine. The BILLet-AR upper and lower receivers are crafted from a billet of 7075-T6 aluminum that is then given Wilson’s proprietary Armor-Tuff finish. The receivers utilize standard AR features like furniture, triggers, charging handles, buttstocks and optics. But internally, the AR9 series uses a closed-bolt blowback operating system.

These guns do not use a gas piston or direct-impingement system like other AR-platform rifles. The blowback system operates on the force of the fired bullet to send the bolt carrier group rearward to eject and cock the hammer, then the recoil spring in the buffer tube sends the bolt forward to chamber a round. There is such a wide variety of 9mm ammunition available—some poor and some excellent—that the Wilson engineering team had to perform lots of testing to create such slick-operating, soft-shooting, reliable rifles and pistols. It does not matter what shape the bullet is—round nose or hollow point—every AR9 is made to operate flawlessly with every type of ammo. The uppers are even rated for +P ammo.

The AR9 bolt carrier group (BCG) is a proprietary design, and is similar to a mil-spec AR’s, but it has some differences. It features a heavy-duty claw extractor and a plunger ejector tuned for reliability. The AR9 BCG is also heavier and does not include a bolt carrier key, cam pin or other direct-impingement parts. The blowback system is what necessitates the BCG’s extra weight. AR9 series weapons also uses the same brass deflectors and ejection ports of Wilson’s 5.56mm ARs.

The dedicated lower receivers feature integral, enlarged triggerguards and flared magazine wells for fast reloading. The magazine wells help funnel the skinny 9mm magazines. Also, the AR9 series weapons are designed so the bolt will lock back after the last round is fired. Finally, Wilson guarantees that its AR9s will shoot 1.5-inch, five-shot groups at 50 yards with premium factory ammunition.

Scroll through the gallery above for a look at four more custom-grade Wilson Combat AR rifles.

For more information about Wilson Combat, visit wilsoncombat.com or call 800-955-4856.