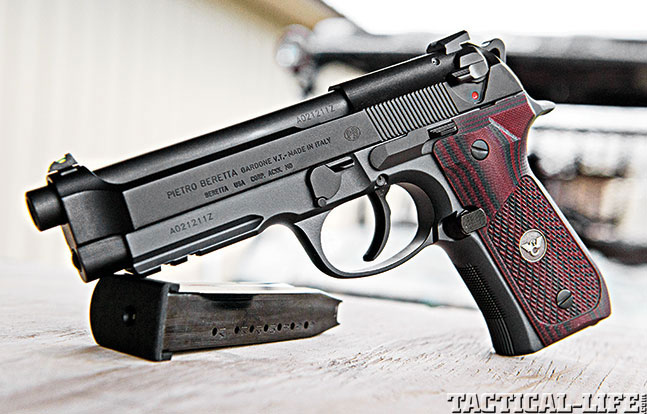 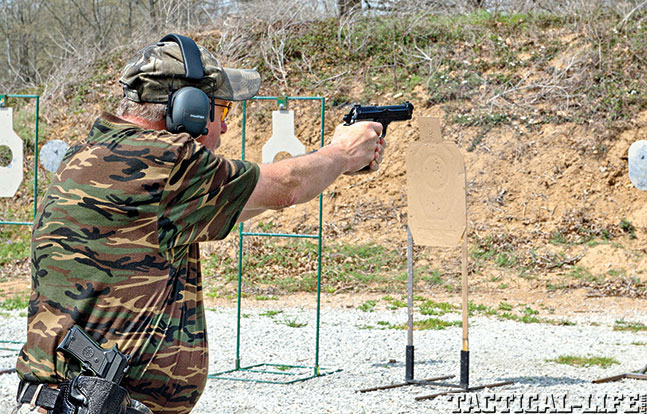 2 of 4
Customizing the Beretta 92/96 with Wilson Combat’s Best
Bill Wilson might be known for his 1911s, but he also shares a fondness for the Beretta 92 platform. He collects many and consistently practices with them. 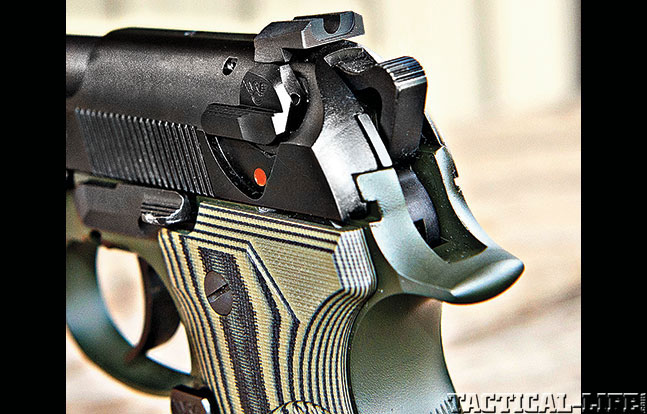 3 of 4
Customizing the Beretta 92/96 with Wilson Combat’s Best
You can choose a single-sided or ambidextrous safety/decocker. Also note the Wilson Battlesight, which is fast on target. 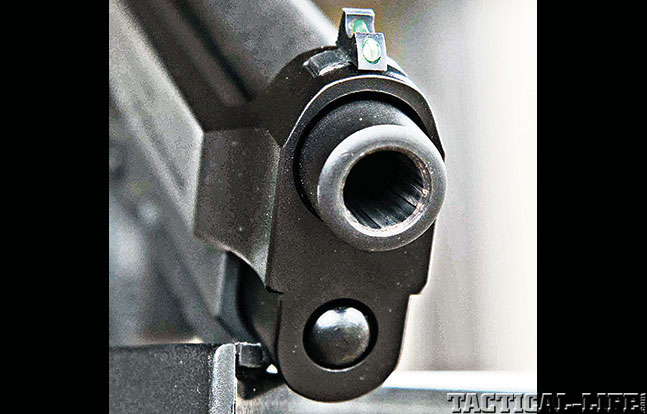 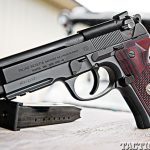 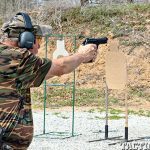 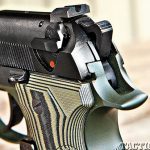 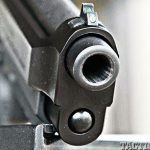 Weapons used  by soldiers and officers over a long career hold a very special place in their hearts—especially if they were used in combat or to defend one’s life. The gun is like a trusted friend, one that stayed with you through thick and thin. Sure, it’s emotional, and while it’s not always the case, many soldiers and officers often experience an attachment to their duty weapons. This has occurred for as long as soldiers have carried weapons into war. My father kept a .45-caliber revolver that sat on his hip in New Guinea during WWII for years afterward. He also spoke fondly of the Ithaca Model 37 shotgun that he carried while a part of the Army Air Corps, calling it the “perfect jungle weapon.” While other weapons were certainly available, these two always worked and saved his life on a number of occasions.

The Beretta 92, designated the M9, remains the issued pistol for most of our military. It is also an issued pistol for a number of police departments. Many soldiers moving into the police world will also purchase a Beretta 92 or similar for personal carry given their familiarity. While polymer-framed pistols tend to rule in the police market, they are anything but favorites for many. Some still prefer the feel of an all-steel pistol, and like all weapons these days, they can benefit from some custom work. Gunsmiths working on 1911 pistols abound, as do those modifying every polymer-framed, striker-fired pistol out there. Those willing to customize a Beretta are few in number—that is until now. Wilson Combat, one of the first companies to create custom-grade 1911 pistols on a large scale, has started tricking out Beretta 92/96 pistols.

I recently traveled to Bill Wilson’s Circle WC Ranch in northeastern Texas and got the chance to put these pistols to the test. My primary reason for the trip was to hunt hogs on Bill’s 10,000-acre ranch, which has 9,800 acres of free range and 200 acres of preserve dedicated to hogs. The lodge is spacious and almost luxurious, with good food and excellent company. It is also a place for Bill and his son, Ryan, to test and work on new projects. The ranch also has a pistol range, a 100-yard rifle range and even a range with steel targets set out to 600 yards. Bill will host instructors like Ken Hakathorn and others for rifle and pistol training here.

“Wilson Combat has essentially become a one-stop shop for almost any Beretta 92/96 customization.”

During these types of events, Bill has had numerous requests to modify the Beretta 92 pistol. Dedicated users wanted to replace parts and receive some custom work. Bill Wilson decided it was a great idea, and while he is certainly familiar with this pistol, he chose to bring in the best—Ernest Langdon—as a technical advisor. Langdon is one of the original innovators when it comes to high-performance Beretta 92 pistols. Langdon has used this pistol as a Marine and has also competed extensively with it to become a true master of the platform. Often sought out as an instructor by federal agencies—including the State Department—and military units, he is truly an expert with the Beretta 92. Together, he and Bill Wilson have come up with some really nice upgrades to this venerable handgun.

Wilson Combat can upgrade customer-supplied Beretta 92 and 96 pistols. Some of Wilson’s parts include new sights, grips, guide rods, triggers and safeties. There are also trigger springs, recoil springs, holsters and pouches. You can order these parts and have them installed by competent gunsmiths, or you can send your pistol to Wilson Combat for a few complete packages.

For the Basic Carry Package, Wilson will tune your Beretta’s action; install a contoured magazine well, a rear Battlesight and a fluted steel guide rod; coat the frame in Armor-Tuff; and laser-etch the company’s logo into the slide. The IDPA SSP Division Package (only for M9A1 models) adds a fiber-optic front sight, an oversized magazine release and G10 grips.

With the Custom Carry Package (for the 92F, 92FS and 96FS), you also get checkering on the front and backstraps, a round triggerguard, G10 grips with the Wilson Combat medallion and a custom carry safety/decocker. For 92A1 and 96A1 users, a dovetailed front sight is added. You can also add an Elite II hammer and G conversion (decocker only) where applicable. The prices range from $360 for the base package to $770 for the Custom Carry work.

If you are not interested in a complete package, you can also pay for just the work you want, including everything in these packages as well as other custom work. Wilson Combat has essentially become a one-stop shop for almost any Beretta 92/96 customization.

Bill Wilson had several pistols for us to use during our time. Hunting hogs is a nighttime adventure for the most part, so the days were spent training and shooting Wilson Combat pistols. We used some of his personal pistols along with examples of what can be customized for you.

It has been a few years since I’ve used it, but the Beretta 96FS was one of my first personal carry pistols. The G22 was the issued pistol at the time, but it just did not suit me, and the Beretta was one of the few approved pistols. I carried it for a couple years, and it served me well. Accurate, reliable and comfortable to shoot, it remained my duty pistol until my agency approved 1911s for carry. Handling these Wilson Combat Berettas brought back a memory or two, but these versions were much nicer. You can feel the difference just handling them. The checkering was well placed, the controls were slim yet easy to access and the sights were excellent. The annoying and useless “hook” on the triggerguard was removed on these pistols as well. The new G10 grips locked things into place nicely—they really felt like custom pistols.

When it came to sending rounds downrange, it was the trigger that was most impressive. Standard Beretta 92 pistols have pretty smooth DA/SA triggers. They can be a bit heavy and long, but they’re generally smooth. The action tuning on these pistols made the triggers as smooth as butter and quite a bit less stiff. The double-action pull felt about 6 pounds or so, maybe a bit more, and the single-action pull was crisp with just a bit of take-up and minimal overtravel. I performed several drills requiring fast follow-up shots, and after just a few rounds I all but forgot about that first trigger pull. Reminiscent of well-tuned revolvers, you just pull through the first round smoothly. The reset on the single-action trigger was short, tactile and repeatable. These pistols have always been accurate; triggers like this just make it much easier to wring out that accuracy. Bill and Ryan Wilson were getting regular hits at 50 yards off-hand. Mine were just a bit less regular but pretty easy nonetheless. The perfect checkering, the G10 grips and the smooth trigger jobs make these pistols accurate and comfortable to shoot.

Over the course of a few days, none of these pistols ever malfunctioned for me. Most of the shooting was accomplished using Bill’s handloads, with just a few sessions using their factory ammunition. Bill is not a big believer in super-hot loads, so most were pretty comfortable. Still, after doing some ballistic testing through some of the previous night’s hunting adventures, rounds expanded with fantastic consistency. Fired at about 20 yards, it was anything but an FBI protocol, but the results were impressive. I have little doubt that one of these pistols, loaded with Wilson Combat ammunition, would make for a fine duty or concealed-carry combination.

While we didn’t fire groups to measure their accuracy, per se, I was able to shoot some ten-shot groups at about 10 yards using all of the Beretta pistols. With just a bit of concentration, my shots amounted to one large hole. Rapid-fire groups at that range stayed inside about 3 inches or so. Tagging knockdown steel targets was pretty easy, and even headshots on steel at 25 yards were regular. These pistols are accurate by any reasonable or realistic standard.

There was no opportunity for chronographing, but in my experience Wilson Combat’s listed velocities are as precise as it gets, so those listed with the picture of expanded bullets are accurate. Without fail, all Wilson Combat Ammunition tested at my home range has fallen within 50 fps of the posted velocities, with most results being much closer.

Spending a couple days with these pistols is not going to change my preference for pistols without decockers. But, if you are a Beretta 92 fan or are carrying one for duty, these are about as good as they get. Wilson Combat really turns them into custom pistols. If you are carrying a Beretta 92 (or variant) or are looking for a solid custom version, then you really need to give Wilson Combat a solid look. 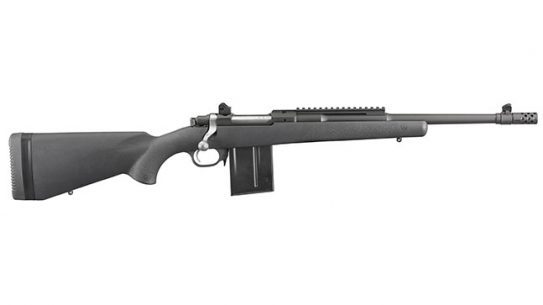