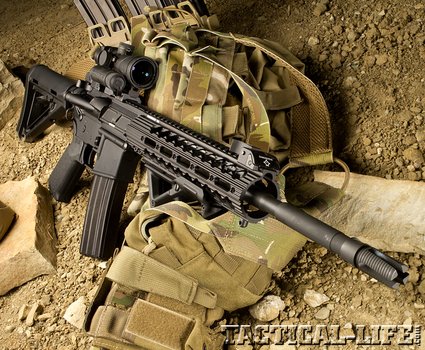 One thing gun-owners enjoy most is tinkering, and the more accessories and aftermarket parts that are available, the better. In terms of modern tactical rifles, none is more popular than the AR, and naturally it has more manufacturers making more accessories and improvements to tack on it. Still, creating a custom look for your AR, while not difficult, can stretch the mechanical abilities of some and the wallets of most. That said, there has been a growing market for factory rifles that go direct to the consumer with the more popular bells and whistles already installed.

Enter the Windham Weaponry Carbine Diamondhead Integrated (CDI), a semi-automatic, direct gas impingement AR delivered complete with the most popular and highest quality upgrades on the market today. Anyone who follows gun news and is a fan of ARs will undoubtedly have heard of Windham Weaponry by now. For those who haven’t, this is a new name but certainly not a new manufacturer.

Like a phoenix, Windham Weaponry rose from the ashes of a famous factory that lay dormant after a corporate relocation. With a new name and the return of an experienced and dedicated workforce, it began once again, producing high-quality rifles. Windham Weaponry first focused on producing just the most popular models of M4-style AR carbines and has only recently expanded its product line into other categories. 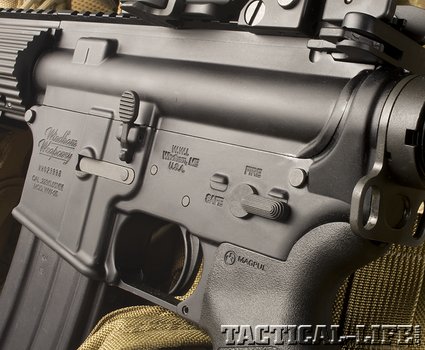 A better than average mil-spec single-stage trigger helped to improve accuracy. It released just at 7 pounds, almost no creep.

Like most of Windham Weaponry’s existing product line, the CDI is also an M4-style semi-automatic carbine chambered for 5.56mm NATO. The biggest extra that comes standard on the CDI is the Diamondhead V-RS “X” free-floating handguard, which is 10.25 inches long and quad-rail ready. Not only does this system free-float the barrel, relieving stress on the barrel and improving the rifle’s accuracy potential, but it also provides over 16 inches of uninterrupted Picatinny-rail space on top when combined with the flattop receiver. This much rail space makes for the easy installation of more advanced optics, including night vision and thermal imagers as well as top-mounted laser units. The modular handguard also makes it a simple matter to add rail extensions where the operator needs them, while leaving the rest of the handguard bare. This helps to keep weight down, decreases the dimensions and girth of the unit and improves user comfort.

The handguard comes standard with a sling attachment point at the bottom front and a substantial length of Picatinny rail pre-installed underneath. Atop this handguard and flattop upper receiver, Windham Weaponry has added Diamondhead flip-up front and rear sights with their distinctive diamond-shaped patterns. These black anodized stainless steel and aluminum sights firmly lock into place when needed and fold conveniently out of the way when using optics. The sights are fully adjustable for windage and elevation, and the diamond-shaped aperture makes for very fast and intuitive target acquisition.

The 16-inch, chrome-lined barrel has an M4 profile and is made from mil-spec 4150 chrome-moly-vanadium steel. (Chrome-moly results in increased carbon content in the steel and adds significant strength and durability, both very desirable features in a duty rifle.) The barrel has a fairly standard 1-in-9-inch twist rate, which does a good job of stabilizing a wide range of bullet weights, including very low-weight, special-use loads.

Another upgrade to the CDI carbine is the addition of the aggressive-looking and effective Smith Enterprises Vortex Slash suppressor. This four-pronged, open-ended device features a right-hand, 15-degree helix twist, which increases the structural rigidity and ensures the suppressor stays on the rifle. This device also almost completely eliminates muzzle flash and is compatible with blank-firing adapters for training purposes. It also accepts Smith Enterprises’ quick-detach sound suppressors. 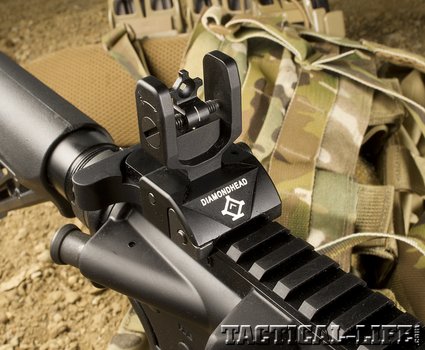 The tough CDI has been built to mil-spec, including the use of M4 feed ramps at the back of the chamber, which are cut wider and lower and are designed to improve reliable feeding of rounds from the magazine into the chamber. This can be especially important in carbines and under less-than-ideal conditions where dirt, grime or moisture are introduced. The bolt and bolt carrier are made from Carpenter 158 steel and high-pressure (HP) tested and magnetic-particle inspected. The bolt and bolt carrier are phosphate-coated and chrome-lined, and the bolt carrier has a mil-spec M16 contour, as opposed to a cheaper commercial bolt, which is stronger and heavier to ensure longer and more reliable operation. The bolt carrier is paired off with a standard carbine buffer.

The gas carrier key has also been properly staked, which is especially important in a duty rifle since screws that are not properly secured can come loose under fire. Of course, all manufacturers will stake their gas keys in some way, but a sure sign of quality is a properly staked gas key that shows a hammer and punch were used with enough force to move sufficient metal into the carrier key screws. Both the upper and lower receiver are manufactured from forged 7075-T6 aluminum and feature a well-applied, black hardcoat anodized finish. The controls on both the upper and lower receivers—dust cover, forward assist, bolt release, magazine release, charging handle and safety selector—are located in the familiar places. (None are ambidextrous.) The CDI has a fold-down, aluminum triggerguard for use with gloves. 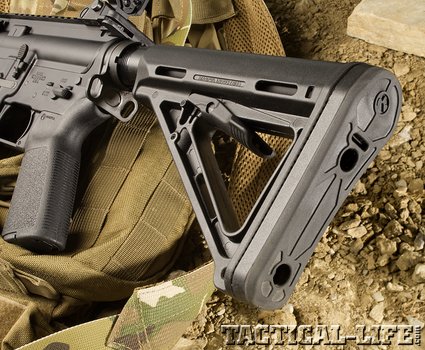 On this carbine, Magpul upgrades abound, including the MOE pistol grip with internal storage and the six-position MOE stock for easy length-of-pull adjustments

Windham has added ambidextrous sling attachment points at the rear of the receiver extension. The standard mil-spec furniture has also been upgraded with the addition of the extremely popular, six-position, collapsible Magpul MOE stock. This unit allows for easy length-of-pull adjustments for use by shooters of various statures or for those wearing heavy clothing or body armor. It also provides a more compact profile for easier transportation in the collapsed position.

The back of the MOE stock has a 0.3-inch rubber buttpad for a non-slip and much more secure shoulder engagement. The stock’s design also protects the adjustment latch, to prevent inadvertent adjustment. There are two sling attachment points and a lanyard hole. Having used this stock extensively, I can attest to its high degree of comfort as well. The lower receiver also features another Magpul upgrade: the MOE pistol grip, which has a very comfortable ergonomic design as well as texturing that helps keep it in hand, even in harsh conditions. This tough polymer grip also has storage capabilities for extra batteries or spare parts. The CDI also features the Magpul AFG (angled foregrip) under the handguard, which I far prefer to vertical foregrips: an angled design allows the shooter a more natural handhold that can improve weapon control. 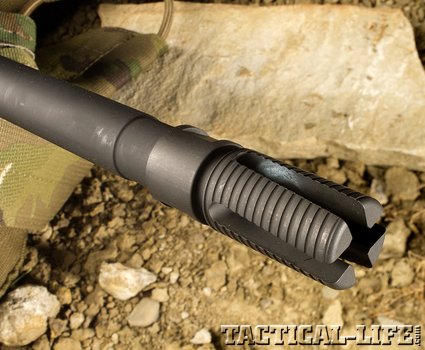 The mil-spec single-stage trigger broke very cleanly at just over seven pounds, with almost no creep, which is better than most standard AR triggers. Still, for precision work, I prefer a lighter trigger, but as a duty rifle it was perfectly serviceable. The fit between the upper and lower receiver was excellent, with only the slightest amount of play between the two. The black hardcoat anodized finish was also very well executed and attractive, in what is sure to become a popular addition to the Windham Weaponry line. Even with all the extras, the CDI still weighed barely over seven pounds empty—not much more than a stripped AR carbine. The added features made the rifle easy to handle, and the ergonomics were excellent.

I have had the opportunity to test several of Windham Weaponry’s rifles over the past year and have been duly impressed with all of them. On the range, the CDI performed like a champ over several days testing. With a mix of ammunition, the rifle performed right out of the box, with no maintenance and not a single malfunction of any sort. For accuracy testing, I used a benchrest at 100 yards and mounted the Trijicon (800-338-0563; trijicon.com) TR20-2 AccuPoint scope, which featured 3-9x40mm and a mil-dot crosshair reticle with an amber dot. The variable power allows for a wider range of view for observation and easy zooming for targeting. The excellent fiber optics on the Trijicon scope gathers ambient light to illuminate the center amber dot without batteries.

The final results were between 2 and 3 MOA, which is certainly respectable and well suited for a duty rifle that is not intended for true precision shooting. Also, this is far better than the military’s 5 MOA minimum requirement for mil-spec M4s. The CDI showed a preference for the lighter bullets.

Windham Weaponry ships their rifles in a black hard plastic case with one 30-round magazine, a sling and an illustrated operator’s manual. Their simple cursive logo is prominently displayed on the receiver’s left side and on the magazine floorplate and will appeal to government agencies who may shy away from logos that are otherwise too aggressive. The company is indeed gaining acceptance among law enforcement and was recently awarded a rifle contract to equip the State of Maine, Department of Inland Fisheries and Wildlife. With the new CDI rifle, Windham Weaponry will certainly continue to gain in popularity. To learn more please call 855-808-1888 or visit windhamweaponry.com. 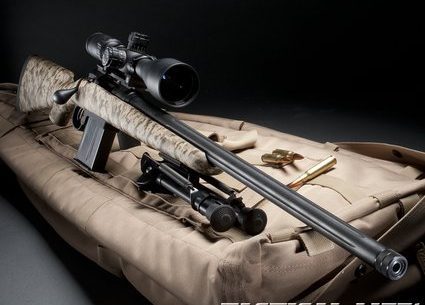 The Savage 10 FCP-SR fits the bill for an accurate, reliable and light rifle...