I know what you’re thinking: “Another new AR maker?” Windham Weaponry, named after the town of Windham, Maine, where the guns are made, may be a new name, but it is far from a new manufacturer. The factory, the machinery, the owner, and most of the employees were formerly under the Bushmaster name. Now that same experience and attention to detail are being devoted wholeheartedly to this new but familiar endeavor. 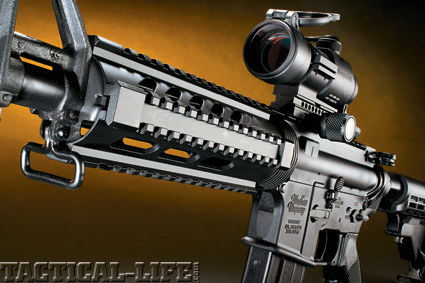 The MAKO Group NFR M4 Aluminum Quad Rail is easily installed on any AR carbine and is currently in use by the Israeli Special Forces.

I was quite eager to see how the new Windham Weaponry MPC would look and perform, and I was not disappointed. The rifle is an M4-style semi-automatic carbine with a direct gas impingement system chambered for 5.56mm NATO. The rifle’s solid and proven design and features, without a lot of extra bells and whistles, lends itself ideally for use as a law enforcement patrol rifle. 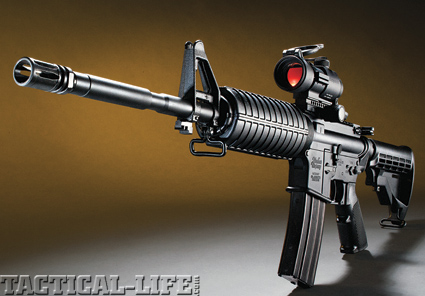 Windham Weaponry brings decades of experience toward manufacturing a high quality and reliable AR carbine for civilian and law enforcement use. Shown here with the Aimpoint Comp M4.

Gun Details
Both the upper and lower receiver are manufactured from forged 7075-T6 aluminum and feature a well-applied hardcoat black anodized finish. The upper receiver features a flat-top design with a removable carry handle with A4 dual aperture sights that are elevation and windage adjustable. There are no indexing marks on the top Picatinny rail, so users would need to take care when removing and replacing optics in order to maintain proper zero. 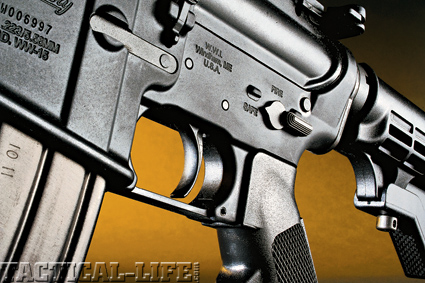 The MPC’s trigger broke consistently at 7.5 pounds, and didn’t have any stack or over-travel, though the author did notice a little creep.

The 16-inch chrome-lined barrel has an M4 profile and is made from mil-spec 4150 chrome-moly-vanadium steel. Chrome-moly results in increased carbon content in the steel and adds significant strength and durability—both very desirable features in a duty rifle. The barrel has a fairly standard 1-in-9-inch twist rate, which does a good job of stabilizing a wide range of bullet weights, including very low-weight ones for specialized uses. A faster twist rate, such as 1-in-8 or 1-in-7, would better stabilize much heavier .223 ammunition, but this is hardly necessary in most applications, especially in the short ranges typically encountered in law enforcement.

Another mil-spec feature is the addition of M4 feed ramps at the back of the chamber. These are cut wider and lower than those for the AR rifle and are designed to improve reliable feeding of rounds from the magazine into the chamber. This can be especially important in fast-cycling carbines and under less than ideal conditions where dirt, grime and moisture can be introduced. 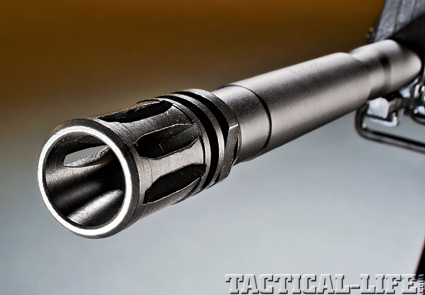 The Windham MPC’s standard threaded muzzle is topped off with a removable A2 flash hider which allows for the use of suppressors.

The standard threaded muzzle is topped off with a removable A2 flash hider, and the front sight base is elevation adjustable. Some folks are sticklers for properly “F”-marked bases on carbines—the Windham Weaponry AR is not so marked, but this is a distinction with very little real-world application. Because of the difference in sight radius with a carbine over a rifle, an “F”-marked sight base is infinitesimally lower than a standard base. This is only an issue when using iron sights at longer distances and it can be easily corrected by installing a taller front sight post.

The CAR black plastic handguards feature double aluminum heat shields and were extremely effective at protecting the carbine-length gas tube as well as my hand from a hot barrel during a full day of range testing. The bolt and bolt carrier are both phosphated and chrome-lined and the bolt carrier has a mil-spec M16 contour, as opposed to a cheaper commercial bolt, which is stronger and heavier to ensure longer and more reliable operation. The bolt carrier is paired off with a standard carbine buffer. It should be noted that mil-spec M16 bolt carriers are legal to install in semi-auto rifles. 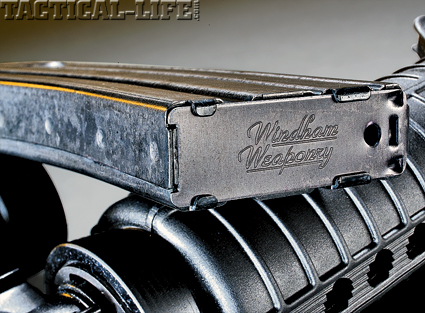 The standard 30-round magazine that comes with the rifle features Windham Weaponry’s distinctive logo on its baseplate.

The gas carrier key is also properly staked, which is especially important in a patrol rifle since screws that are not properly secured could become loose under fire. Of course, all manufacturers will stake their gas keys in some way, but a sure sign of quality is properly staked gas keys, which shows that a hammer and punch have been used with enough force to move sufficient metal into the carrier key screws.

The controls on both upper and lower receivers—dust cover, forward assist, bolt release, magazine release, charging handle and safety selector—are all located in the familiar places with nothing ambidextrous. The triggerguard is also of the fold-down aluminum variety for use with gloves.

For different shooters of various sizes, the M4-type collapsible buttstock has six positions to adjust the length of pull, making it great for any officer or for use while wearing body armor. The buttstock features the Windham Weaponry logo. The stock was well installed and exhibited excellent fit with very little play. Also, the fit between the upper and lower receiver was excellent, with only the slightest amount of play between the two. 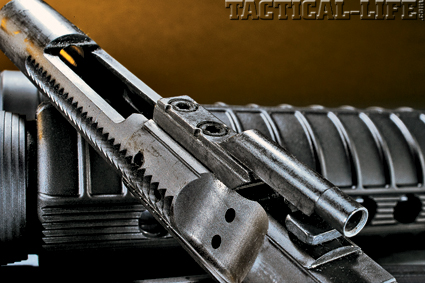 The bolt and bolt carrier on the MPC are both phosphated and chrome-lined and the gas carrier key is also properly staked.

The lower receiver also features a standard military-type plastic pistol grip with finger grooves and a slightly flared magazine well. The Windham Weaponry logo is prominently displayed on the left side of the magazine well and consists simply of the company name in a cursive type script, doing away with more aggressive logos that may be off putting to some department heads.

The trigger was of the standard single-stage AR variety with the typical utilitarian feel I have come to expect. Unfortunately, that means “not great,” and the trigger exhibited a fair amount of noticeable creep, which felt quite a bit gritty but mercifully avoided any stacking or over-travel. It did break consistently at 7.5 pounds, and it should be noted that this was not developed as a sniper-grade rifle but as a utility patrol rifle. In that regard it should serve well.

At 6.9 pounds, this isn’t the lightest AR carbine one can purchase, but it is far from some of the feature-laden alternatives out there, and its short overall length and excellent balance make it easy to handle and pleasant to shoot.

Range Time
For range testing, given the rifle’s twist rate, I stuck with .223 Remington ammo with bullet weights at 55 grains or under. On the initial range session, I used the iron sights only and was very satisfied. Firing off hand, I had no difficulty clearing 4-inch steel disks on a dueling tree at 50 yards, satisfactorily pinging one after the other in rapid succession. As a patrol rifle, even without the use of optical sights, this level of accuracy is extremely suitable. Many will prefer a solid red dot optic, however, for faster sight acquisition and for low-light use as well. The rifle’s flattop upper receiver is eminently suited for easily mounting optics.

For true accuracy results, I paired off the Windham Weaponry MPC with the new Weaver Tactical CIRT (Close-Intermediate Range Tactical) scope. This excellent and compact optic features 1-5×24 variable power with an illuminated, adjustable-intensity red/green first focal plane glass-etched reticle. Glass etching the reticle ensures that there is nothing to come loose under shock or recoil. Placing the reticle in the first focal plane is also an added benefit as this causes it to grow or shrink as magnification is increased or decreased. This keeps the reticle in proper perspective for use in range finding. 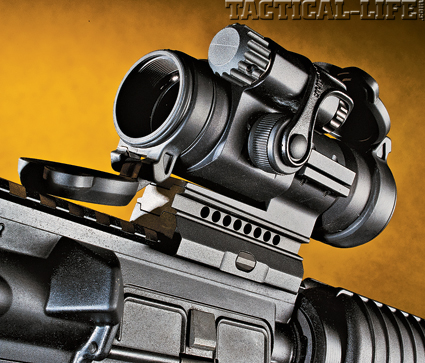 The rifle’s upper receiver features a flat-top design with a removable carry handle and a Picatinny rail ideal for installing optics like this Aimpoint red dot.

The Weaver CIRT is specifically designed for the .223 round and is well suited for patrol rifle use thanks to its versatility. At 1X magnification with the illuminated reticle, it can function as a standard red or green dot scope. Green is easier to see in daylight conditions. For greater precision or intermediate-range shots, as a designated marksman scope, an officer can increase magnification to 5X. The horizontal crosshairs are segmented in mils and the center circle and dot is measured at the size of a human head at 100 yards.

Another advantage to this optic is that even if the battery goes dead the scope still functions with its standard reticle. As is to be expected from a duty optic, the Weaver Tactical CIRT features solid one-piece construction, fully multi-coated lenses, and comes with argon gas-purged 30mm tubes to prevent fogging. It’s also waterproof and shockproof.

During my entire range session, I never experienced a single malfunction of any sort and the rifle performed admirably. Accuracy from a bench rest at 100 yards was about what one should expect from a patrol rifle, with the best groups measuring 1 MOA and the worst measuring 4 MOA, with most shots averaging in between. With the right ammunition and a better trigger, this rifle is certainly capable of pinpoint accuracy.

Final Thoughts
Windham Weaponry ships their rifles in a black hard plastic case with one 30-round magazine, sling and a well-illustrated operator’s manual. Currently, the company’s offerings are a bit limited, as production has only recently been renewed. However, there are California- and New York-compliant models available, as well as a more optic-ready carbine with no front sight and a heavy-barrel version.

Given the difficulties experienced by gun owners in certain states, it is much appreciated that Windham Weaponry chose to include them before flooding the marketplace with a plethora of models and options. It is clearly far preferable to make a few very good products and earn a reputation for quality first and foremost. However, those seeking high-quality AR alternatives from Maine won’t have long to wait. I spoke with representatives from the manufacturer at a trade show and they mentioned that several new models were on the way to meet this growing demand.

I came to the MPC with high expectations given the rifle’s hard-earned pedigree and my own prior ownership of Bushmaster firearms made by the good folks in Windham, and I am happy to say that I was not disappointed. There are few things more satisfying to a consumer than a high-quality, American-made product that performs as it should each and every time. That level of dependability is one feature that will not be lost on officers assigned this as their patrol rifle.