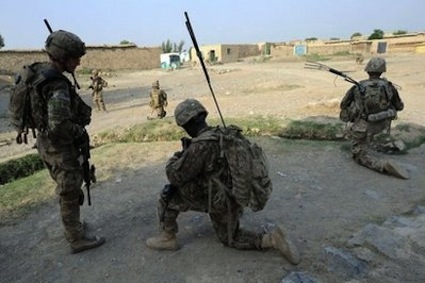 US soldiers take up position outside an school building during a foot patrol in Khost province in the east of Afghanistan on June 21, 2011. (AFP/Ted Aljibe)

Small
This is certainly the Pentagon’s preference. It would involve continuing to keep fairly robust levels of American forces in Afghanistan through 2014, likely as many as 60,000 soldiers, according to a plan that Seth Jones, an analyst for the RAND Corporation and until earlier this year an adviser to special operations forces in Afghanistan, submitted in testimony before the Senate Foreign Relations Committee last month.

Medium
This approach would limit US goals in Afghanistan, focusing on assisting Afghan national security forces and targeting terrorist leaders – a plan Jones calls an “Afghan-led counterinsurgency.” Such a plan “would largely terminate US combat operations in 2014, except for targeting terrorist leaders,” he says.This might mean pulling out 20,000 troops by the end of 2011, 40,000 more by the end of 2012, and reducing forces to roughly 30,000 by 2014, says Jones.

Large
This is the “counterterrorism” option favored by Vice President Joseph Biden and others, and would involve withdrawing all, or most, military forces from Afghanistan and relying on US Special Operations Forces and CIA units to capture or kill members of Al Qaeda and other terrorist groups.In this case, Jones explains in this option submitted to the Senate Foreign Relations Committee, â€œThe US footprint in Afghanistan might more closely resemble the current US footprint in Yemen: Lean and lethal. This would involve drawing down half of the 100,000 US troops currently in Afghanistan by the end of 2011, and nearly 30,000 more by the end of 2012, leaving some 20,000 US troops in the country by 2013.