The 7.62x54R cartridge may not be familiar to most American shooters, but this Russian round, first introduced in 1891, has the distinction of being the oldest military cartridge in continuous use. I suppose you could call it the original 7.62mm, which started its service life in the ubiquitous bolt-action Mosin-Nagant rifle and is still in active-duty frontline use as a machine gun and sniper rifle round.

Today, surplus Mosin-Nagant rifles (from Czarist to WWII variants) are plentiful and cheap, but the Russian modern SVD sniper rifle known as the Dragunov—not so much. No need to despair, however. If you want a real Russian semi-auto rifle chambered in this powerful cartridge, Wolf Performance Arms, related to but independent from Wolf Ammunition, is now importing the Vepr rifle made at the famous MOLOT (Vyatskie Polyany Machine Building Plant) factory. 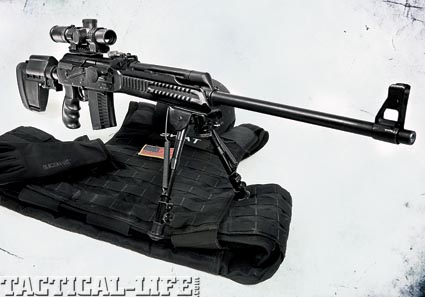 Gun Details
In its Plain Jane, thumbhole-wood-stocked version, this rifle is already pretty impressive, but when the guys at Wolf finished tricking it out, that’s when the “tacti-cool” factor hit 11. The Vepr rifles are not SVDs, however. Instead, they are your traditional AK-pattern rifles with beefed-up receivers that are meant to be used in the role of a squad automatic weapon. They’re based on the full-auto RPK in 7.62x39mm.
Like all traditional AK-pattern rifles, the Vepr uses a long-stroke gas-piston method of operation, where the bolt and piston rod all move as one big unit. This is a lot of mass slamming back and forth as you fire, which has a negative impact on accuracy and point-of-aim shifts are common. The advantage, however, is greater reliability. This is one of the main reasons for the AK’s reputation of mediocre accuracy and high reliability. 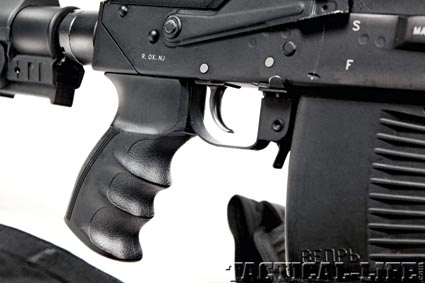 The Vepr 7.62x54R comes with a very comfortable, ergonomic ATI Strike Force pistol grip, which is made from a tough, glass-reinforced polymer.