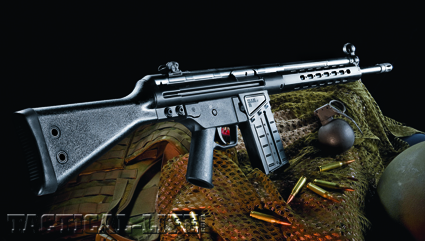 The Heckler & Koch G3 rifle remains a central player in world military events half a century after Spain and Germany first issued this type of rifle. Part of the explanation for the G3’s longevity is the care taken in its development.

In 1942 Wilhelm Stähle, a Mauser-Werke employee, began experiments to modify the roller-locked breech of the new MG42 machine gun to reduce its weight for use as an assault rifle. Stähle eliminated the MG 42’s recoiling barrel in favor of a gas piston acting on twin rollers to open the breech. In 1944-45, engineers at Mauser-Werke modified Stähle’s design, eliminating the separate piston to simplify its manufacture, because Germany’s logistical situation was becoming desperate.

In this mechanism, expanding powder gases forced the empty cartridge case rearward, causing it to push a locking piece into the rollers, in essence using the just-fired case as a piston before ejecting it. The components were so arranged that as the bolt mechanism returned to battery, the firing pin could reach the primer of the chambered cartridge only if the rollers were in the correct position, ensuring that the breech was solidly locked at the instant of firing. With the elimination of the gas piston, the system uses a form of delayed blowback rather than a true locked breech, thus the designation Gerät 06(H), H for “halbverriegelt” or “half locked.” The Nazi army weapons office judged it unsafe with a rifle cartridge. Despite official skepticism, Mauser-Werke persisted and eventually built 30 prototypes. Designated StG45(M) in early 1945, these chambered the 7.92x33mm cartridge of the notorious MP44 “Sturmgewehr,” Germany’s seminal assault rifle.

At 8.2 pounds the StG45(M) was more than three pounds lighter than the MP44 and used less strategic material in its construction. Though the design vindicated Mauser-Werke, the lengthy development process meant that World War II ended before the Germans could mass-produce this promising new weapon. A team headed by Ludwig Vorgrimmler continued to refine the mechanism under French supervision at Mauser-Werke until the French government, under pressure from the other Allies, halted operations at Mauser-Werke in 1946. Shifting operations to the CEAM (Centre d’Etudes et d’Armament de Mulhouse) factory in Mulhouse, France, Vorgrimmler and assistant Theodor Löffler developed three prototypes from 1946 to 1949 for the .30 Carbine, 7.92x33mm and 7.65x35mm cartridges. 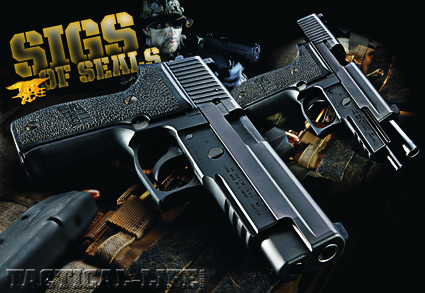