by Mike Boyle
in Guns, Rifles
0

I have long fancied firearms that are a bit beyond the ordinary. My modest collection includes examples of many popular firearms that I shoot on a regular basis. But I remain intrigued by those odd ducks. Nearly 40 years ago, one of my shooting buddies reported that he had lucked into a unique autoloading rifle manufactured by Winchester. Few details were provided and my mind raced with possibilities as I drove to his home. Imagine my surprise when he broke out a Winchester 1907 rifle chambered for the .351 SL cartridge. Prior to that encounter, I had known of the existence of such a rifle but never had the opportunity to examine one.

Compared to many other Winchester classics such as the M70 or M94, the 1907 was never produced in great numbers. It did, however, fill a unique niche and remained in the Winchester line for 50 years. To say the least, the 1907 boasts a very storied past and was, in fact, one of the first weapons to be used in aerial combat. During the Great Depression, it was widely used by both gangsters and forces of good. Of late, the concept of a “patrol rifle” has been the hot ticket in the law enforcement community, but the 1907 filled that role over 80 years ago.

The Winchester Model 1907 was the most successful of three centerfire autoloading rifles designed by Thomas Crossley Johnson. Initially, Winchester introduced the Model 1905 chambered for the .32 SL and .35 SL cartridges. Neither round was especially powerful, but they set the stage for better things to come.

Despite the fact that the .32 SL has been labeled one of the most useless cartridges of all time, it is the forerunner of the .30 Carbine of World War II and Korea. Stretching the .35 SL resulted in the more powerful .351 SL. And, for those who believe life begins at 40, there was the hard-hitting Model 1910 chambered for the .401 SL.

Like its stablemates, the 1907 is a blowback-operated semi-automatic rifle. Blowback operation required a fairly heavy action, and weight of the total package is more than what you would expect for an intermediate-power cartridge. Cartridges are fed via a detachable box magazine located just forward of the triggerguard. Both five- and 10-round magazines were available, and new copies are available from Triple K. The action of the 1907 can be manually cycled by bringing a rod located under the barrel to the rear. A slotted screw at the rear of the receiver can be backed out to break the 1907 down for routine cleaning and lubrication.

Most 1907s were the standard model with a plain walnut stock; however, some deluxe variants with checkering on the forestock and pistol grip were also made. Police models with sling swivels, a fixed rear sight, and barrel sleeve to accommodate a Krag bayonet were also manufactured.

Measuring 40 inches in length, the 1907 proved handy to use in tight quarters. This quality caught the attention of the French military, which felt it was ideal for trench warfare and ordered roughly 5,000 copies during World War I. The barrel length is 20 inches and this classic selfloader tips the scales at 8 pounds. I wouldn’t categorize the .351 SL cartridge as hard kicking, but the blowback action creates a very unique sensation of rearward thrust. Open sights were standard on the 1907 rifle. Tang-mounted and receiver-mounted sights were available as a factory option. 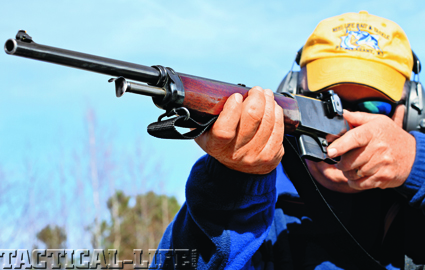 The 1907’s blowback action could only handle moderate-power cartridges. The .351 SL cartridge’s energy roughly equates to a .357 Magnum fired from a carbine. 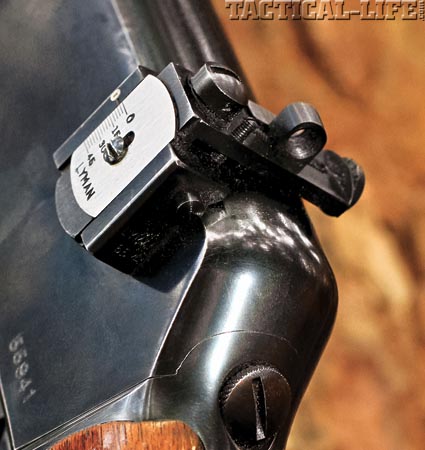 The author’s 1907 has an aftermarket Lyman sight mounted on the receiver.

Behind the .351 SL
The .351 SL was introduced as a more powerful replacement for the earlier .35 SL. In the horsepower department, performance is much closer to the magnum handgun cartridges than a full-power rifle round. The slightly tapered case measures 1.38 inches in length and is typically loaded with a 180-grain bullet. Muzzle velocity was advertised at 1,870 FPS, yielding 1,400 foot-pounds of muzzle energy. The major manufacturers ceased turning out .351 SL ammunition around 1970, but it is still available from smaller custom loaders.

I’ve encountered .351 SL ammunition loaded with both soft-point and full-metal-jacket bullets. Factory ammo is quite old and should be carefully inspected before firing. Shooters who own rifles chambered for odd cartridges have been known to horde ammunition, and in the case of the .351 SL, I plead guilty. If you like, the .351 SL can be reloaded and both jacketed and cast-lead bullets are available if you look hard enough.

The .351 SL never developed a stellar reputation for accuracy, nor is it powerful enough for hunting big game. It has been successfully used for the taking of small deer or even bears and it was a popular number for jungle hunting in Central and South America at one time. As an anti-personnel round, the .351 SL was quite satisfactory at short to intermediate ranges. 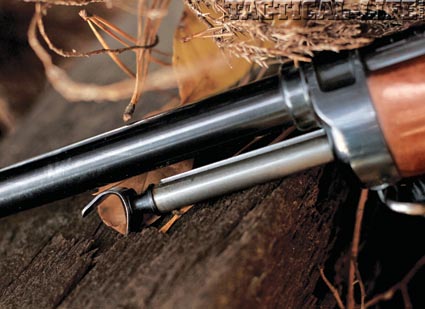 Shooters can manually cycle the action of the 1907 by bringing the rod located under the barrel to the rear. 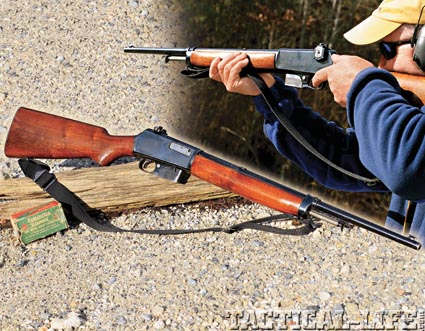 Though it’s now 105 years old, the Winchester 1907 fulfilled a role in law enforcement. Its wooden stock and forend were traditional, yet its blowback action was a milestone in autoloader progress.

Blazing New Trails
At the outbreak of WWI, a small number of Winchester rifles were purchased by France, Britain, and Russia. Most notable were the rifles purchased by the French, who converted many to fire on full-auto. The French also manufactured their own 10-round magazines and purchased over 1.5 million rounds of .351 SL ammunition. The handy, fast-firing 1907 was highly regarded by trench raiding parties.

Perhaps the most unique footnote regarding the 1907 was its role in aerial combat. In the early days of WWI, aircrafts were used as spotters, and enemy aviators often acknowledged their foes with a wave of the hand. That situation didn’t last, however, and before long shots were being exchanged. Great Britain purchased a number of 1907 rifles that were pressed into service with the Royal Flying Corps for use by rear seat observers.

Throughout the 1920s and ’30s, the 1907 was used by law enforcement and the criminal element. The Dillinger gang and Baby Face Nelson utilized this Winchester selfloader. Border Patrol agents in the southwestern U.S., who got into frequent exchanges of gunfire with Mexican banditos, also favored it. Border Patrol agents frequently taped a pair of 10-round magazines together for better continuity of fire.

Prison guards and police departments used Winchester 1907s extensively. At least one large agency in New Jersey held on to their 1907s well in to the l980s, until scarcity of ammunition necessitated their withdrawal from service.

Wish Fulfilled
A Winchester 1907 occupied a spot on my “wish list” for years, but I was never able to make the right connection. The examples I came across in the used gun rack were either in rough shape or commanded too steep a price. About 20 years ago, I came across a fine example, and after a bit of horse-trading, it was mine.

My copy was manufactured in 1955 and was among the last turned out by Winchester. While not exactly showroom new, its metal and wood are in excellent shape for a 56-year-old rifle. At some point in time, the previous owner removed the factory sights and replaced them with a Lyman peep and front post with a white insert. This setup is similar to the ghost ring arrangement on my shotgun—it’s very fast to pick up.

From a casual rest, I was recently able to put five shots into a spread of about 2.5 inches from a distance of 50 yards.

This hardly qualifies it as a tack driver, but considering its intended role, I was quite pleased. Even more surprising were the results of chronographing some vintage 180-grain loads from Western. Measured muzzle velocities averaged 2,024 FPS, significantly faster than original specifications. Not too shabby for ammunition that is probably older than me.

The Winchester Model 1907 represents a milestone in the evolution of the self-loading rifle. Despite the fact that it was a technological dead end, it was a harbinger of things to come. Today, autoloading rifles chambered for intermediate-power cartridges are commonplace, but in 1907, this T.C. Johnson design was in a league of its own. For more information, visit winchesterguns.com.