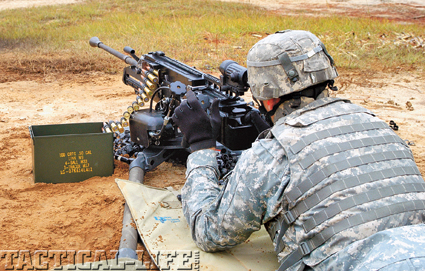 Because the XM806’s felt recoil is so low, the gunner can utilize an optic like the M145 when firing the weapon at distant targets. DoD Photos

John Browning’s remarkable firearm designs seem timeless, although many of his earliest creations from the late 19th century are no longer popular or have been frequently modified over the decades. Many Browning firearms remain essentially the same, however, reflecting the inventor’s genius and the broad applicability of his concepts. The 1911 .45 ACP pistol celebrated its centennial last year, and over the next decade, several more Browning military weapons will chalk up 100 years of service.

Ma Deuce
One of the most effective and ubiquitous guns in this category is the Browning M2 .50-caliber machine gun, popularly known by many troops as “Ma Deuce.” Scaled up from the M1917/1919 water- and air-cooled .30-caliber machine gun at the end of World War I to accommodate the .50 BMG cartridge, also of Browning origin, the M2 entered military service in 1921 as an anti-aircraft weapon but was quickly adapted for use with infantry, vehicles, aircraft and ships. Today, the M2 has a longer active record than any other small arm, except the 1911. 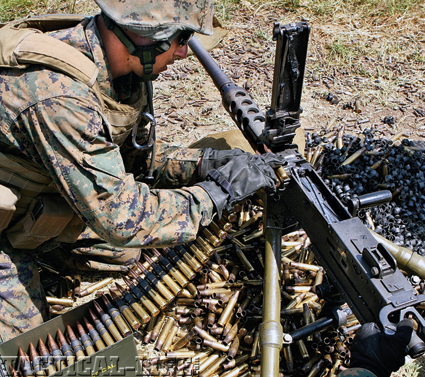 Although the M2 weighs twice as much as the XM806, it will stay in service due to its high rate of fire and lethality. DoD Photo

The M2 is an air-cooled, belt-fed machine gun utilizing M2 or M9 disintegrating metal split-link belts containing 100 rounds. The weapon fires from a closed bolt with short recoil operation, meaning that the bolt and barrel both recoil when a round fires, then the barrel stops and the bolt extracts the empty shell, reloads and pushes the barrel back into firing position. The closed-bolt cycle enables synchronized fire, facilitating the M2’s use in aircraft or in multiple mounts. With a maximum effective range of 2,000 yards, an average 500 rounds per minute, and a round that leaves the muzzle at about 3,000 FPS, the .50-caliber ball round can generate between 10,000 and 15,000 FPE, compared to the .30-06’s 2,000 to 3,000 FPE. Clearly, the M2 is a formidable weapon, and thousands of troops for the last 90 years, whether benefitting from its fire or facing it, can attest to the effectiveness of the M2.

Ma Deuce’s power comes, however, with a significant penalty—weight. The standard gun and tripod mount tip the scales at more than 127 pounds, far too much for a single soldier to heft and a big load even for a two-man infantry crew.

General Dynamics (GD) Armament and Technical Systems, one of the M2’s producers and based in Charlotte, North Carolina, has provided a solution to this problem, creating the XM806 .50-caliber machine gun.

The XM806 not only shaves weight from the .50-caliber package, but it also re­­­­­duces recoil, an absolutely necessary requirement for the weapon to maintain its utility. Without low recoil, the weapon could lose its accuracy, high rate of fire or, at the worst, literally shake itself apart, creating a reliability nightmare for the crew.

The new machine gun weighs just 40 pounds, and a new tripod mount adds only 22 pounds more, a system load less than half of the M2. GD achieves this reduction with advanced materials but also by simplifying the gun’s design and eliminating parts, with improved reliability and easier maintenance as useful byproducts. Unlike the M2, the XM806 fires from an open-bolt position. This means that when the trigger is pulled, the bolt moves forward, feeding a round from the belt into the chamber to fire. Energy from each shot cycles the bolt, ejecting the empty cartridge and reloading.

The weapon’s “recoil mitigation technology,” as GD calls it, reduces recoil to about 325 pounds and actually improves accuracy, eliminating dispersion at high rates of fire to less than 1.1 mils around the aiming point. Less dispersal translates into fewer rounds fired to neutralize a target. Low recoil also means that the XM806 can incorporate a variety of advanced optical sights that will perform effectively, impossible on the M2.

An unnamed U.S. Army official noted, “Safety is improved through a manual safety and a quick-change barrel that eliminates the requirement for the operator to adjust headspace and timing. The reduced recoil permits the mounting of an optic for greater lethality through increased first-burst accuracy and control.”

The barrel design is compatible with existing heavy weapon sights for accuracy to target at the same range as the M2. The gun has a 265-RPM cyclic rate of fire. Although this is lower than the M2, improved accuracy and less dispersal means fewer rounds are required. The ammunition belt feeds from the left and ejects cases and links to the right. The gun’s barrel must cool or be changed after 400 rounds at sustained burst rates of 40 rounds per minute. Current threshold reliability is 6,000 mean rounds between failure, but the weapon’s objective MRBF is 10,000. The XM806 design is impervious to weather and can operate in any condition.

Although the weapon offers major advantages to ground troops, especially special operations teams or other light units that routinely operate with a two-man crew, the new model is also suitable for stabilized remote weapon stations that were not designed for the beefy M2. This enables light vehicles previously constrained by weight or recoil limits to increase defensive firepower.

Another GD specialty is the Gatling gun. The company produces several models for both ground and air missions. One of the most widely used has been the GAU-19, an electrically driven weapon that fires .50 BMG rounds at selectable rates of 1,000 or 2,000 rounds per minute, although some versions use a 1,300-rpm rate. Although smaller than several other Gatling systems, the GAU-19 is not a “field-portable” weapon and is installed on several ground vehicles, small ships and helicopters. Originally fabricated with six barrels, the standard weapon today utilizes three. The weapon uses linkless feed, but can be adapted for the M9 linked belt. Recoil force is about 500 pounds.

General Electric originated the modern Gatling design and produced the weapons at a facility in Vermont. Lockheed Martin acquired the facility, then GD, which continues production in Vermont and Maine. 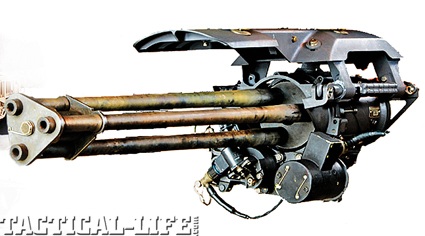 The GAU-19/B light Gatling gun shaves nearly 25 pounds in weight from its heavier cousin, the GAU-19/A.

In 2011, GD utilized many of the same weight-saving technologies employed in the XM806 to develop the GAU-19/B and bring down the weapon’s weight. The weapon functions essentially the same way as the GAU-19/A with comparable capabilities, but the B-model’s gun weight is 106 pounds, nearly 25 percent less than the GAU-19/A, which weighs 139 pounds. While it is heavier than the XM806, the GAU-19/B, with a 1,300-RPM rate of fire, the system can provide far heavier protective fire when mounted on Humvees or similar platforms. On helicopters, the high rate of fire makes the weapon far more effective from the air, and weight reductions in weapon systems always improve a rotorcraft’s life and maneuverability. The same capabilities on ships provide close-in protection against such sea-based threats as cruise missiles.

These General Dynamics innovations in weapon development, both derived from John Browning’s original concept for the .50 BMG round, virtually ensure that this remarkable and deadly projectile will remain one of the centerpieces of the U.S. armed forces’ armory for decades into the future. Although the new weapons are departures from Browning’s initial ideas, it is clear his genius established a heritage that has inspired today’s talented designers and engineers whose collaborations ensure Browning’s name will long be remembered. For more information, visit generaldynamics.com. 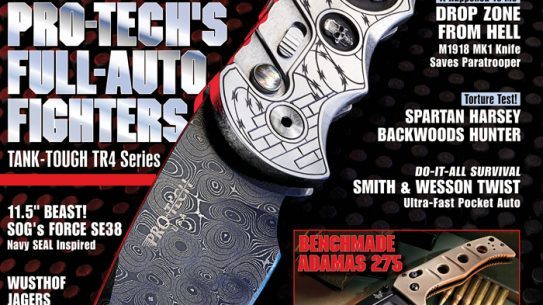 Because the XM806’s felt recoil is so low, the gunner can utilize an optic…