With a judicious use of Magpul parts, Head Down Products of Powder Springs, Georgia, delivers an aesthetically perfect battle rifle with its XPR15 BR. The company’s billet production methods afford them unique customizing opportunities not available to many mainstream manufacturers who machine their rifles from forgings. This, combined with the Magpul additions, gives the rifle a custom feel unlike any other straight off a production line.

A selective-fire rifle chambered for 5.56x45mm, the XPR15 BR is immediately distinguished from other AR-15 models by the shape and contours of its receivers. Both the upper and lower are designed with emphasis on the angles of protruding metal in places like the forward assist, bolt housings, and magazine well. Rather than the rounded feel of most models, the Head Down version is more geometric, with sharp lines extending from various points along each receiver. Machined from a billet of 6061 aluminum, the receivers are finished with Type III hardcoat anodizing to limit corrosion and wear. They’re joined by KNS anti-walk pins. Available in two colors, black and Flat Dark Earth, both the upper and lower receivers are coated to match the Magpul components that complete the system. A BR coated with the Flat Dark Earth color scheme looks impressive and doesn’t contrast like many other AR-15s that maintain black receivers while drop-in components, like those made by Magpul and used in the BR, are a different color. 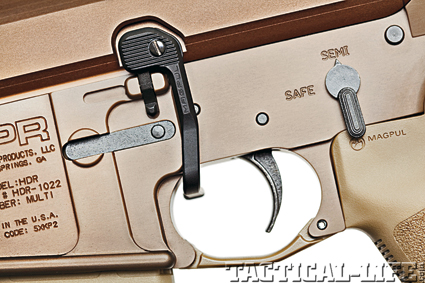 Head Down installed a Magpul BAD Lever in a unique cutout to help ensure ease of operation of the rifle. Oleg Volk Photo

In the desert and other arid environments, the XPR15 BR would work well with any camouflage worn on the body. For those desiring an even greater custom look, Head Down can apply hydrographics to the rifle, a printing process that will achieve full 360-degree coverage of the surface with one of eight available patterns, including a blue and grey skull design and A-TACS camouflage, which have been the talk of trade shows where they were showcased. 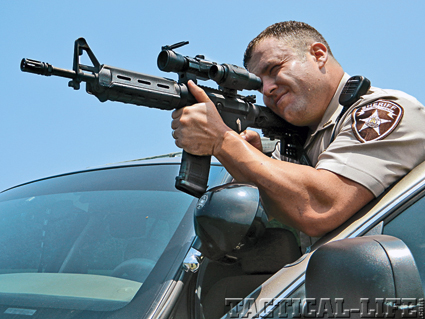 As a patrol rifle, the XPR15 BR’s standard Magpul additions will speed up an officer’s shots and give them the fighting advantage.