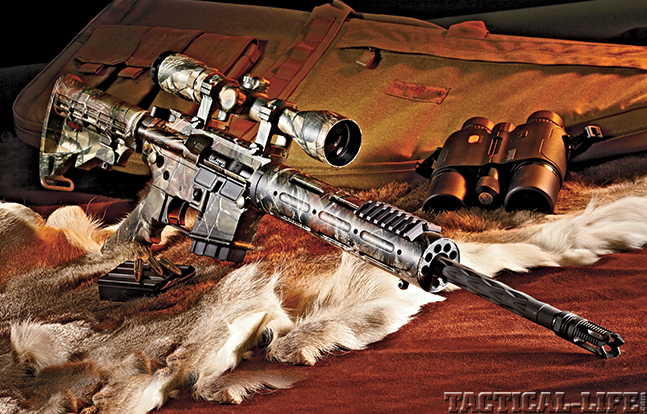 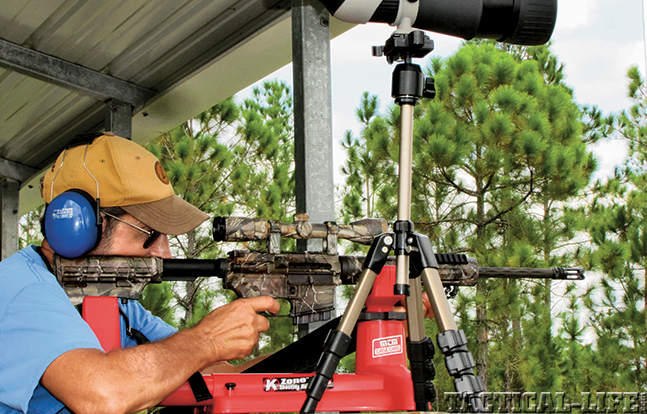 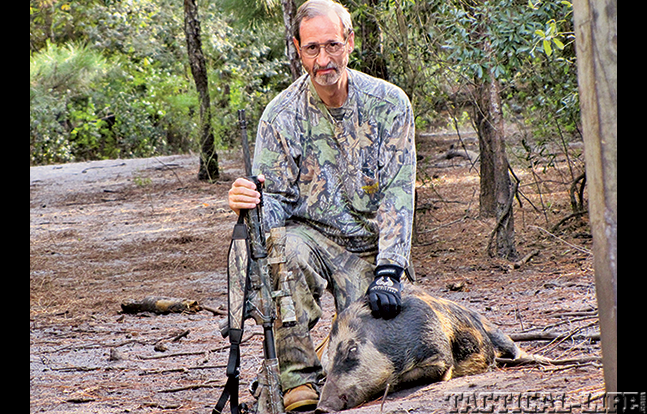 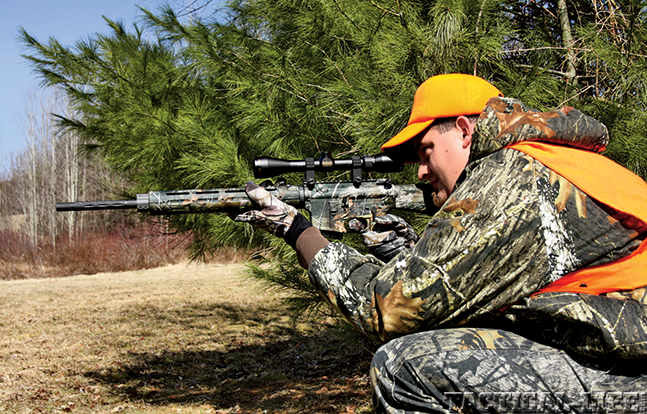 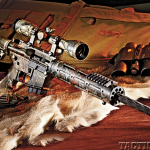 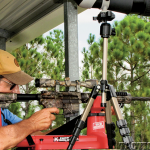 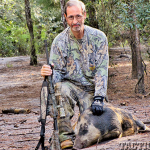 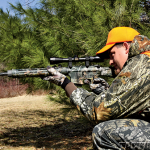 The AR-pattern, 300 AAC Blackout Hunt-Ready Carbine (HRC) from Yankee Hill Machine (YHM) combines 1.5-MOA accuracy, fast follow-up shots and a game-stopping .30-caliber bullet in a compact, lightweight platform. When it comes to hunting whitetails and feral hogs in the woods, the HRC is the modern equivalent of grandpa’s .30-30 Winchester.

YHM states that the HRC comes with “everything but the bullets,” and the rifle I was sent for testing was just as advertised. Inside the padded, hard plastic case was the rifle, a five-round magazine, a mounted and sighted-in Bushnell Banner 3-9x40mm scope, two accessory rails for mounting lights or lasers on the forend and a GrovTec padded sling. The rifle truly was ready to hunt.

The HRC has a fast-handling, 16-inch barrel with a rather unusual fluting pattern composed of eight rows of alternating oval-shaped, 1-by-0.25-inch scallops. This significantly lightens the barrel but does not compromise its accuracy-enhancing rigidity. The scallops also increase the barrel’s ability to dissipate heat. The barrel is made of heat-treated 4140 steel and has a fast 1-in-8-inch twist rate that will stabilize longer .30-caliber bullets used in subsonic loads.

The forged upper and lower receivers are made from 7075-T6 aluminum. The two halves are held together with YHM’s EZ Pull takedown pins, which have enlarged heads. The rifle’s long Specter-length handguard is made of 6061-T6 aluminum, as are the scope rings. The free-floating handguard is designed to fit over YHM’s low-profile Specter gas block.

Internally and externally, there were no tool marks, scratches or poorly formed edges anywhere on the rifle. The single-stage trigger had a consistent 6.5-pound pull. The take-up was smooth, the break was clean and there was a small amount of overtravel. The gun’s total hunting weight—with a loaded magazine, a sling and a scope—is 8 pounds—which made it easy to carry.

The rifle also has a very good finish. The steel barrel was evenly Parkerized in matte black, and other Parkerized steel parts were finished in a matte black, too. The handguard, upper and lower receivers, adjustable stock, YHM scope rings and the Bushnell Banner scope were all finished in Realtree AP camouflage. Overall, the carbine blended well with the foliage in the backwoods of western Florida.

The HRC’s Bushnell Banner 3-9x40mm scope has a “Circle X” reticle. The scope was sighted in at 100 and 300 yards. Its clarity, definition and image color were good, and the reticle was easy to use. There was no noticeable shift in the point of impact when the power setting was changed from 3X to 9X and back again.

The 300 AAC Blackout, or 300 BLK, is a recently standardized version of the .300 Whisper wildcat originally developed by J.D. Jones for single-shot hunting pistols. The major difference between the Whisper and the Blackout is that the Blackout’s chamber throat is 0.015 inches longer. Therefore, .300 Whisper loads can be fired in guns chambered for the Blackout.

The 300 BLK is a very efficient cartridge. It uses maximum charges that range between 17 and 21 grains of fast-burning powders to propel a 110-grain bullet at velocities of 2,300 to 2,450 fps from a 16-inch barrel. This makes it slightly more efficient than a 110-grain .357 Magnum cartridge fired from a lever-action rifle. However, the .30-caliber spitzer bullets used in the 300 BLK give it a much flatter trajectory and better downrange energy than the .357 Magnum. The 300 BLK can also fire .30-caliber bullets that weigh up to 225 grains. These bullets are subsonic and work well with suppressors. On the other hand, these loads only develop about 500 to 600 foot-pounds of energy (fpe), and they are much less suited for hunting medium-sized game than the 110-grain loads, which deliver about 1,400 fpe but only generate about 5 foot-pounds of recoil energy.

On the other hand, transitioning the AR-15 platform from 5.56mm NATO to 300 BLK is evidently a work in progress. The maximum combined overall length (COL) of the Blackout cartridge is 2.260 inches. The HRC functioned well with cartridges that combined shorter COLs and bullets with secant ogives. A search of the internet indicated that other shooters also had some reliability issues when using with bullets with tangent ogives.

I tested the HRC’s accuracy and velocity at the Volusia County Gun & Hunt Club as well as the Flagler Gun & Archery Club. Hornady supplied its 110-grain 300 Whisper V-MAX load, and I was able to purchase two 300 BLK loads: Remington’s 115-grain UMC ammo and a box of PNW Match ammo with Sierra 125-grain Ballistic Tip bullets.

The Remington load produced the most accurate 100-yard, five-shot group, which measured only 1.44 inches. This is sufficiently accurate for hitting the vitals of deer and hogs at the 300 BLK’s maximum big-game distance, which is about 125 yards. Hornady’s 110-grain V-MAX varmint load produced a best group of 1.82 inches. This kind of accuracy could cleanly take coyotes at 200 yards. On a day when the wind was less than 5 mph, the coyote hunting distance could be stretched to 300 yards.

Feral hogs are an invasive species that were brought to the New World by Spanish Conquistadors. Escaped domestic pigs adapted well and flourished in agricultural areas. Hogs are omnivorous. They compete for food with a variety of wild animals, and they also do considerable agricultural damage. Worse yet, hogs reproduce quite quickly. Because of these facts, many farmers and foresters have opened their lands to hog hunting.

I used the HRC for a hog hunt at “Two Guys and a Hog” (twoguysandahog.com), which operates a hunting camp about 10 miles south of Perry, Florida. The camp has a six-person bunkhouse, an outdoor picnic/barbecuing area, a hog cleaning table and a shooting range. All of the hunting is done from elevated platform blinds that are placed over feeders. The total hunting area is slightly over 1,000 acres.

I chose Remington’s 115-grain UMC load for the hunt. Normally I’d use a load with a more heavily constructed bullet, but the Remington load was accurate and penetrated over 18 inches in a ballistic test using 3-gallon water jugs. It was the deepest-penetrating bullet I had.

After confirming my zero on the shooting range, I climbed into the blind. Thirty minutes later, a group of six or seven pigs approached the feeder at distance of about 40 yards. The largest was a 150-pound brown sow. The first shot hit the sow just left of the spine, between the second and third ribs, grazing a rib. The bullet penetrated into the left ventricle of the heart, and the hog dropped in place.

The guide had asked me to fire insurance shots, because he didn’t enjoy chasing wounded hogs. So I fired two anchoring shots while the hog was down. The second shot hit the top of the right shoulder blade, and the third one hit the seventh rib on the right side. Both bullets fragmented badly. The second shot fragmented on entry. Small pieces left a 2-by-3-inch entry wound in the ribs, and a large fragment followed the outer surface of the shoulder blade. It penetrated downward, heavily damaging the right shoulder and breaking the upper right leg. The third shot also fragmented. A number of fragments entered the right lung, and one large fragment deflected about 75 degrees and traveled about 18 inches, stopping on the inside of the right thigh.

The performance of these “finishing” shots really brings home the importance of using a non-fragmenting expanding bullet when hunting big game. The fragmentation of the second and third shots clearly demonstrated that no matter how good your aim, a bullet used on game must stay intact and reach the vital organs at which it is aimed in order to produce a clean kill.

Yankee Hill Machine’s Hunt-Ready Carbine is light, handy, powerful and well-made. It has sufficient accuracy to hunt medium-size game and varmints out to the practical limits of the 300 BLK. All in all, the HRC performed very well in the field. Yankee Hill Machine’s HRC rifles are available in other variants, which include different barrel lengths with different twist rates, other calibers including 5.56mm, 300 BLK and 6.8 SPC and different finishes as well.

Whether you’re on or off-duty, the belt you wear may mean the difference between...