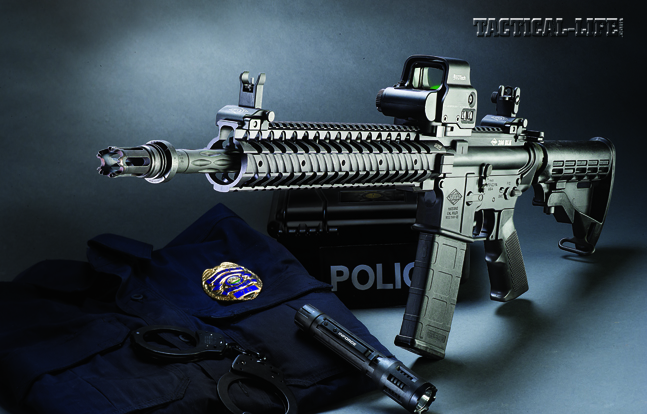 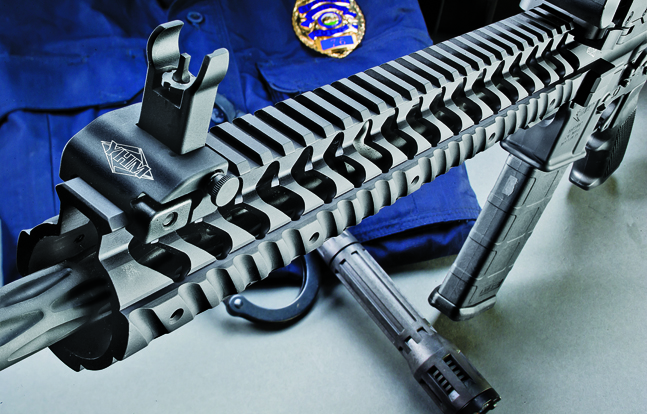 2 of 10
Yankee Hill Machine SLR 300 BLK | Gun Review 2
The slim, free-floating SLR forend’s sides and bottom are designed for a comfortable hold, but users can add rail sections as needed. 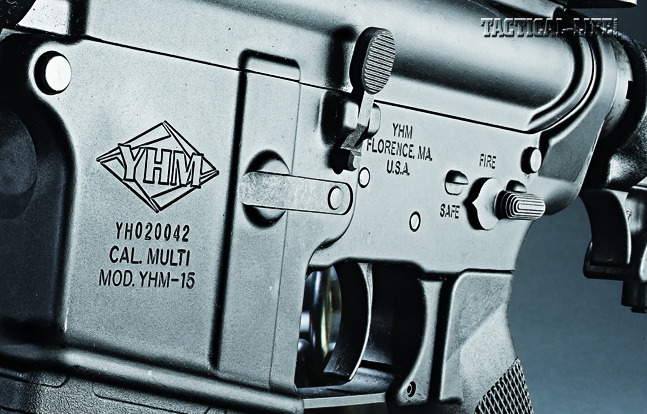 3 of 10
Yankee Hill Machine SLR 300 BLK | Gun Review 3
The lower receiver is completely machined in house from forged 7075-T6 aluminum, and its controls are all in standard AR locations. 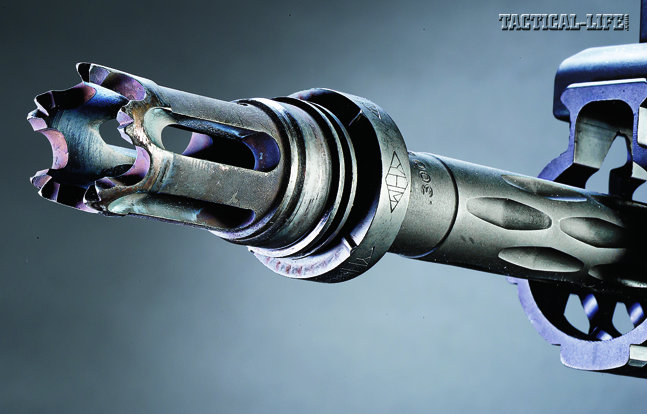 4 of 10
Yankee Hill Machine SLR 300 BLK | Gun Review 4
The flash suppressor works well on its own and also serves as a quick-detach mount for the Phantom LT sound suppressor. 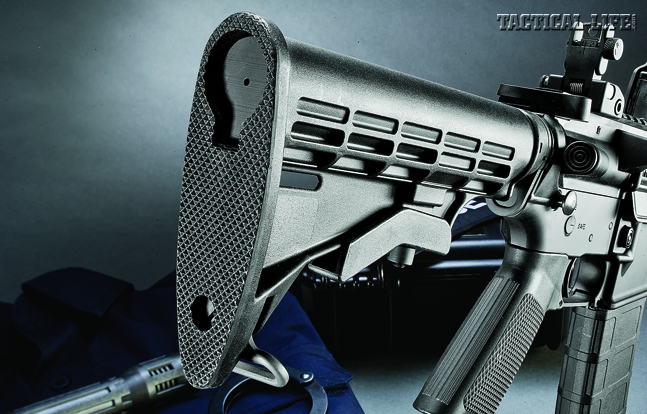 5 of 10
Yankee Hill Machine SLR 300 BLK | Gun Review 5
Yankee Hill ships the SLR with a six-position collapsible buttstock on a mil-spec buffer tube. It offers a solid cheekweld and a sling loop. 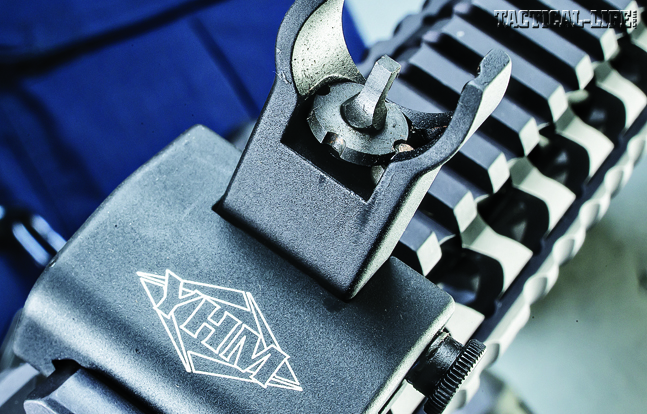 6 of 10
Yankee Hill Machine SLR 300 BLK | Gun Review 6
YHM’s Quick Deploy front sight flips up with the push of a button yet remains low profile when folded down. Note the large protective wings. 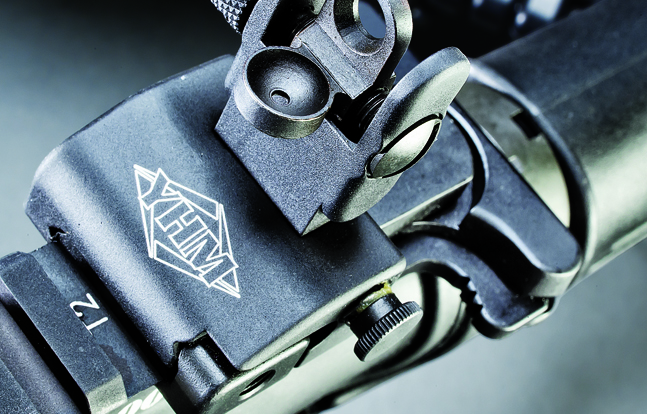 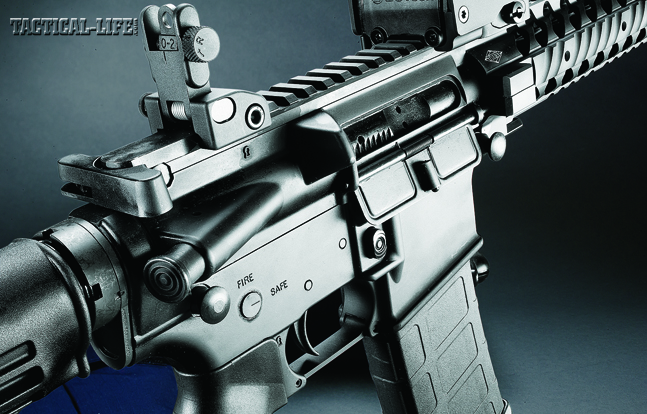 8 of 10
Yankee Hill Machine SLR 300 BLK | Gun Review 8
At the range, the SLR ran reliably and fed the assortment of ammunition flawlessly, even with the Phantom LT sound suppressor attached. 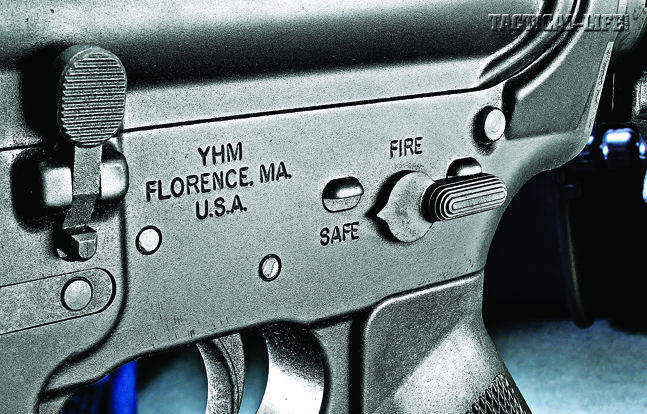 9 of 10
Yankee Hill Machine SLR 300 BLK | Gun Review 9
Most operators will be at home with the left-side-mounted safety and bolt release, making it easier for LEOs to transition to the SLR. 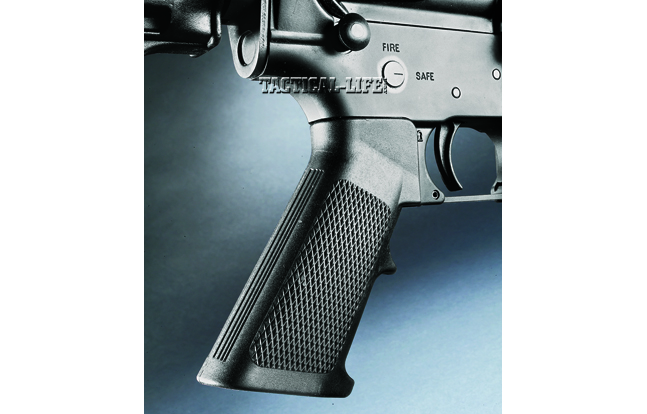 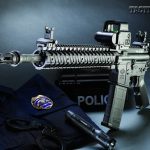 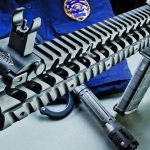 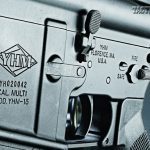 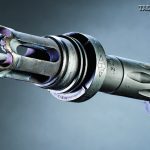 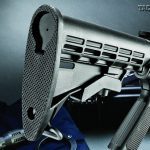 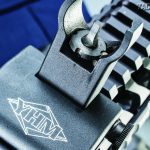 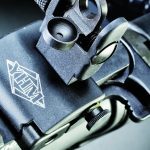 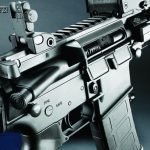 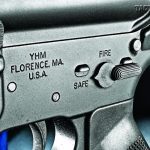 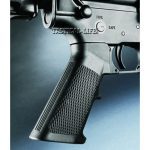 Yankee Hill Machine (YHM) first showed up on my radar in 2006. A friend was putting together a training company and needed a dozen or so AR-style rifles for both simulations and live-fire training. The company wanted to bring in special units and LE contracts and needed a weapon system that could duplicate issued rifles. Like most new companies, money was tight, and the most commonly seen guns were almost impossible to get in any numbers. Those that could be found were pretty expensive for the day. So, the owner had a local company build them some rifles with mil-spec upper and lower receivers using predominantly YHM parts. Since I’m an armorer, my initial reaction was skepticism. At the time, AR-platform rifles that were cobbled together were typically less than reliable, and these were going to get run really hard.

When the rifles arrived, the quality was impressive given their cost. Of note was the quality of the railed forends and sights, the most obvious YHM parts. Well made and nicely machined with a solid fit, they were as good as some of the big names of the day at almost a third the cost. At the time, forends could cost almost as much as the rifle, making YHM’s models even more impressive. The company’s sights were equally well made—at a price officers could afford.

Needless to say, this interaction began a relationship that has continued for years. During my years as a retailer, many officers purchased YHM parts and other accessories. Another area where YHM really shined: suppressors. Many officers just could not afford the high-dollar titanium models gaining traction, and YHM offers quality suppressors at very reasonable prices. YHM’s attention to affordable quality has continued and now includes complete rifles—such as the new SLR—and some of the nicest forends on the market.

Gun Details
YHM’s newest forend design is the SLR (Slim, Light, Railed). It is available in several lengths and two primary configurations: railed and smooth. Quad-railed versions remain narrow and lightweight, with built-in rails at 3, 6, 9 and 12 o’clock positions. Smooth models have a fixed top rail with rail attachment points along the other three positions. Rails of various lengths can be attached as desired. Customizable handguards are fast becoming the norm—most have no need for all the rail space a quad-rail affords. Smooth handguards are more comfortable and ultimately slimmer and lighter. Both SLR styles accommodate piston and direct impingement systems. Attachment requires no extra tools, and the barrel remains free-floated. Hardcoat anodized, the SLRs have a really clean look and remain very comfortable to grasp.

SLR rifles are equipped with this forend, along with other quality YHM parts. The rifle I was sent for testing was chambered in 300 AAC Blackout, or 300 BLK, which is quickly becoming a favorite for duty use. The SLR starts with the company’s YHM-15 lower receiver. Forged from 7075-T6 aluminum and machined in-house, it features an enlarged mag well and will accept any mil-spec parts. My test rifle’s lower receiver internals were all standard-issue, with the exception of the EZ Pull takedown pin set. Larger knobs allow you to pull the pins out without a tool or bullet. Rounding out the lower receiver were an A2-style pistol grip and a six-position collapsible stock.

Also manufactured on site, the upper receiver is forged from the same 7075-T6 aluminum. Marked “300 BLK,” it is also hardcoat anodized and matches nicely with the lower receiver. The bolt group and charging handle are standard issue. The barrel of the carbine is fluted with an elongated diamond pattern. The rifle has M4 feed ramps for greater reliability, and the 16-inch barrel features a 1-in-8-inch twist rate as well as 1/2-36 threading, which allows for the use of YHM muzzle devices. A quick-disconnect (QD) Phantom flash suppressor tops off the barrel. YHM also ships the SLR with both front and rear flip-up QDS sights. These sights are very low profile, allowing for scopes or red dots to be attached easily.

Range Time
One of the benefits of the 300 BLK cartridge is its ability to be suppressed without the reliability and excess pressure issues associated with the 5.56mm cartridge. To facilitate the range test, YHM sent me one of its new Phantom LT suppressors in .30 caliber. Weighing in at just 20 ounces, it remains light, yet its stainless steel and Inconel construction keeps it strong. With a retail price of only $789, it remains one of the most affordable on the market.

Testing was completed primarily with my EOTech EXPS3-2 holographic sight. It is a carbon copy of the one sitting on my deployment rifle and remains one of the best options for police carbines. I used the EOTech with a G33.STS 3X magnifier for longer ranges. For group shooting to test the SLR’s accuracy, I used a Leupold 3-18x44mm Mark 6 scope.

Testing started at 25 yards and in without the suppressor. Suppressors are great, but they remain a luxury for most officers. Most of the range testing was completed using supersonic ammunition loaded by RTBA, an ammunition company in Texas. Loaded using Barnes’ excellent Tactical M/LE 110-grain bullet, this ammo is well suited to duty use. While 300 BLK ammunition can be hard to find, RTBA seems to generally have some available. This load has proven to be accurate, reliable and pretty clean running.

The SLR functioned flawlessly—there wasn’t a single malfunction. And the SLR’s accuracy was excellent. The SLR forend is light, making the rifle pretty handy and well balanced. Its thin profile is well suited to most hand sizes and is perfectly suited to the most popular shooting grips these days. Moving between targets on the move, this rifle is very fast. Its recoil was only a little more than a 5.56mm rifle, and muzzle rise was minimal. The flash suppressor has a really nice look, and it keeps the noise to a minimum and suppresses flash as well as any birdcage-type device. The trigger is typical of a mil-spec trigger and broke cleanly.

The 300 BLK caliber can be kind of magazine picky. As a rule, mil-spec magazines will feed 300 BLK ammo without issue. Some mags have an issue locking the bolt to the rear. This seems to be more evident with shorter barrels, and it can be just as dependent on the build. With the SLR, all of my PMAGs worked, including several Gen 2 versions. I also tried some aluminum Brownells magazines and a few other quality, mil-spec brands—all worked fine. A consistent performer in this caliber is the Lancer Systems L5 Advanced Warfighter, and mine worked perfectly in this rifle. Everything ran in this rifle, suppressed or not.

It was finally time to check the SLR’s accuracy without the Phantom suppressor mounted. Remington’s 125-grain Match remains the best 300 BLK ammo I’ve tested, and it’s the only load to accomplish true match accuracy so far. It has consistently provided the best groups in every 300 BLK rifle I’ve used. This round seems to be inherently accurate, and sub-1-inch groups are pretty typical. This test was no exception, with the Remington Match yielding a 0.75-inch group at 100 yards. Everything else grouped into 1.5 inches or less—the SLR is plenty accurate for any duty environment.

With the suppressor attached, the SLR’s accuracy at 25 yards and in did not change, and reliability remained solid. When shooting a ton using a suppressor, you really need to keep the bolt carrier group well oiled, as you’re going to get a lot of buildup. After a couple hundred rounds, the rifle was filthy, but if I kept it wet, it still ran. Heat was noticeable after long strings, as expected, so if you shoot a lot like this, wear gloves. The SLR rail has lots of openings, so it dissipates heat well, but it will get warm. Backpressure with this can is what you would expect with a standard suppressor, but it did not adversely affect operation. Rapid fire did not seem to lock things up, and though a lot of excess gas came my way, it wasn’t much more than a 5.56mm similarly suppressed.

Final Thoughts
If you already have another suppressor, be aware of the barrel’s 1/2-36 threading. YHM engineers felt this was a better choice for use with the company’s QD muzzle devices, providing a better shoulder. But if you look at other major manufacturers’ websites, you’ll notice that none make a QD attachment device in this thread pattern to fit their suppressors. Threaded .30 caliber suppressors are almost exclusively 5/8-24, so you will need an adapter. Conversely, YHM makes a QD mount with 5/8-24 threads as well as most other standard configurations. You can fit this suppressor on one of the company’s flash suppressors—not only a 5.56mm AR (1/2-28) but even the 14x1mm LH threading used on your AK-47. With the Phantom LT suppressor removed, shift in impact was about an inch, but this is often very rifle dependent and seems very typical.

When asked which suppressor type is best for general use, my advice is often a .30-caliber QD that can be mounted on a 5.56mm rifle. This allows you to use one suppressor for most of the popular calibers. Even on 5.56mm rifles, these suppressors remain pretty quiet with less fouling. Given the expense and the time it takes to get one, it’ll give you the most bang for the buck.

Yankee Hill Machine’s SLR rifle worked really well, whether the suppressor was attached or not. Its accuracy was excellent, and the new SLR forend is fantastic. The Phantom LT suppressor also performed well: backpressure was as expected, the shift in impact was within the norm and the price is excellent. This rifle and suppressor combination would make a great choice for any duty application. For more information, visit yhm.net or call 877-892-6533. 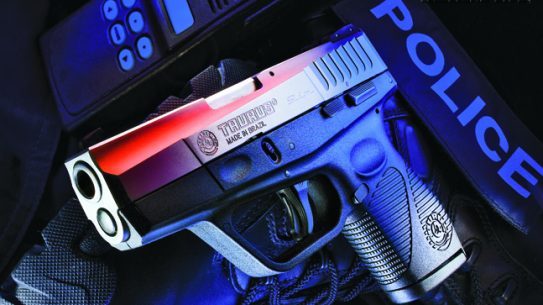 The Taurus 709 Slim 9mm is a deep-cover defender streamlined for fast, lifesaving backup!