0
SHARES
103
VIEWS
Share on FacebookShare on Twitter
Yankee Hill Machine’s 9mm SBR is the perfect weapon for entry duties because of its low recoil, utter reliability and compact size—even with the Wraith XL suppressor mounted and ready to rock!

Although many SWAT teams and departments are moving to rifles, this is not universally true. There are still several agencies that require pistol calibers for their entry teams and even patrol officers. As a rule, these are primarily urban agencies where ranges are short and downrange overpenetration is a critical concern. For some administrators, it might be a political decision. In the case of one local agency, it was about fitting the weapons into a motorcycle storage compartment. Regardless of the reasons why, many police officers are restricted to pistol calibers.

Several myths surround the use of submachine guns or other shoulder-fired weapons chambered in pistol calibers. The first is the reported lack of “stopping power” compared with that of rifles. But this is just not the case at typical engagement distances for a police department. Especially in an inner-city or urban environment, the ranges are often 25 yards or less, with across-the-room distances being the norm. At those ranges, pistol calibers have been doing the job for LE and the military for decades.

Another myth is about accuracy. Shoulder-fired weapons chambered in pistol calibers can be very accurate out to 50 yards and even beyond. Early in my SWAT career, we used submachine guns in .45 ACP, and it was not uncommon to place 10 shots inside a 1-inch circle at 50 yards with iron sights—plenty accurate for most police work. 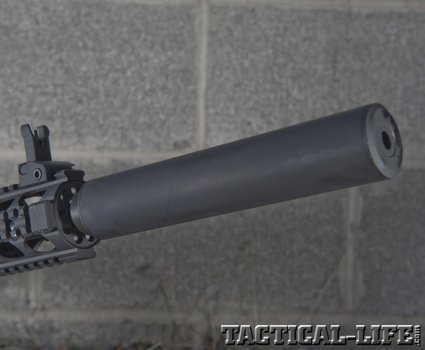 Many in the SWAT world seem to think entry teams must have rifles. The AR platform has become quite popular, especially when it comes to models with shorter barrels. And since entry teams by their very definition are involved in close-range affairs, short-barrel rifles (SBRs) are ideal. Rifle calibers provide some advantages here, like the ability to penetrate through “hard” targets better, but pistol calibers eliminate concerns regarding overpenetration.

This is where Yankee Hill Machine (YHM) comes in with a pistol-caliber SBR in 9mm, an AR-based platform with a barrel longer than most pistols, increasing velocity while allowing operators to use higher-velocity rounds that yield some pretty impressive ballistics. While using a +P+ 9mm round in a handgun can be problematic, you’ll barely notice it in a rifle. And because the SBR utilizes the common AR platform, accessories are easy to find and mount, and training is simple.

Yankee Hill Machine has been in the machining business since the 1950s. A family business carried on by the founder’s son, James, YHM has always been committed to providing high-quality products at reasonable prices. My first dealings with YHM were in the late 1990s, when I was able to inspect a number of their rifles while a friend was putting together a training company. The quality of the rifles was excellent, and they came at a very affordable price. Many law enforcement officers have turned to YHM for suppressors, too, and they are equally as solid when it comes to quality and price. 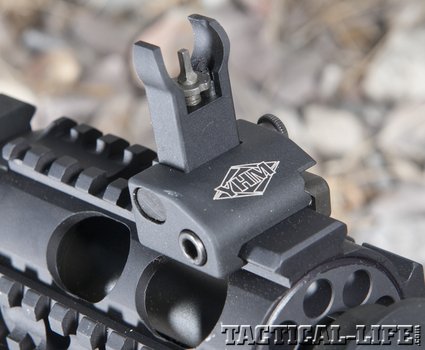 For this test, YHM supplied me with a complete SBR and Wraith suppressor. Chambered in 9mm, the gun features a 5.5-inch barrel with six-groove, 1-in-14-inch-twist rifling. The barrel is also capped with the YHM Wraith XL quick-detach flash suppressor with 1/2-36 threading to accept sound suppressors.

The flattop upper and lower receivers are forged from aircraft-grade 7075-T6 aluminum that has been hardcoat anodized per military specifications. The upper features YHM’s lightweight “Mini” quad-rail forend, which only measures 4.15 inches long and offers four points for mounting sling swivel studs. The bolt carrier assembly is a ramped CMMG model with the appropriate bolt group. As the SBR has a simple blowback system, no gas tube is necessary. For targeting, YHM equipped a set of their folding 5040 QDS (Quick-Deploy Sight System) front and rear sights.

The lower receiver houses a standard trigger and internals with a left-side-mounted safety. In order to facilitate the 9mm magazines, the gun was fitted with a Hahn Precision magazine adapter. The SBR comes with a standard A2 pistol grip and M4-style collapsible buttsock with an ambidextrous sling-attachment point. The gun came with a single 32-round 9mm magazine. 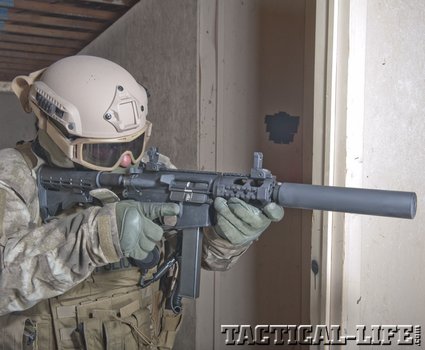 Because I intended to test this weapon with its entry capabilities in mind, YHM supplied the Wraith XL sound suppressor, which is threaded on over the flash suppressor. Built from aircraft-grade aluminum and stainless steel, the Wraith is incredibly light yet has plenty of strength for pistol ammunition and harsh use. It kept the SBR well balanced and easy to wield in close quarters. With the Wraith suppressor, 8.5 inches long, mounted to the SBR’s 5.5-inch barrel, the entire system remains shorter than a typical rifle.

Given the rifle’s short barrel, accuracy testing was limited to 50 yards. That is my typical range for zeroing this type of weapon, so the distance worked out fine. For the accuracy portion of the evaluation, I mounted a Zeiss Z-Point P red dot. The remainder of the testing was completed with the iron sights. Shots were fired from a bench using a bag as a rest. The best group was accomplished with Black Hills 115-grain Tac-XP ammunition and measured 1.23 inches. Everything but the practice ammunition fell inside 2 inches at 50 yards. 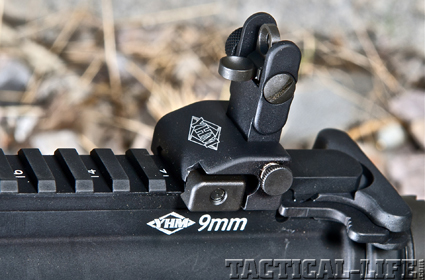 Yankee Hill’s QDS rear sight flips up easily with the press of a button and only extends 0.44 inches from the SBR’s top rail when folded.

My “practice” 9mm ammunition is a mix of several different types of FMJ rounds. They were all factory-new and primarily 124-grainers, with some 115-grain rounds included. The YHM SBR ran it all without a hitch—that in and of itself was new for me. My early experience with 9mm AR rifles had been less than stellar. But YHM’s SBR kicked out everything and did so with authority. The rifle ran the hottest ammunition with little issue and at velocities over 1,300 feet per second (fps) even with the short barrel.

Since I had just one magazine, performing magazine changes was problematic, but the the bolt held open on the last round and loaded every time with the press of the bolt release. This magazine was stiff, so wear gloves if you are going to load by hand. Resorting to my MP5 days, I loaded the magazine by pressing it down on loose rounds on the bench. The magazine dropped free, loaded or not, and inserted easily. The Hahn Precision magazine adapter facilitated fast and positive mag insertions.

The vast majority of this test was accomplished in the shoothouse, an environment the gun is best configured for. The SBR was very light and easy to manipulate in the house. The gun even ran well without the suppressor mounted, though I kept the Wraith suppressor attached most of the time. Shooting indoors with the practice ammunition was pleasant. With the +P+ ammunition, the gun cracked a bit more loudly, as one might expect. But the gun never came loose, nor was there any appreciable change in the point of impact over the course of the testing.

Running in full kit throughout, I found that the gun worked easily with full body armor, a helmet and even goggles on. Actually, it was kind of nice to run the rooms of the shoothouse with iron sights. Recoil, even with the hottest ammunition, was almost nonexistent, so controlling the SBR during multiple shots was easy. The trigger is what you would expect from a standard setup, but if shooters were so inclined, it would be easy to drop in a new two-stage trigger. Regardless, the YHM SBR’s setup was excellent right out of the box.

Discussions as to the strengths and weaknesses of rifles versus pistols as entry and patrol weapons will go on forever. There are great arguments to be made, but they are lost on officers who are restricted to either type of firearm. The bottom line is getting that officer what he or she needs and can use under policy. For those restricted to a pistol caliber, the choices can be slim. But Yankee Hill Machine has added a solid option for those looking for a short-barreled, shoulder-fired AR in 9mm. Above all, the SBR was very reliable—even digesting +P ammunition—and proved to be very accurate out to 50 yards.

The Wraith suppressor made things quite pleasant, and it should be a requirement for all entry weapons regardless of caliber. It just removes one more distraction from an already intense, stimulus-filled environment. The Wraith was plenty quiet, held its point of aim, and very lightweight, keeping the weapon well balanced and maneuverable. 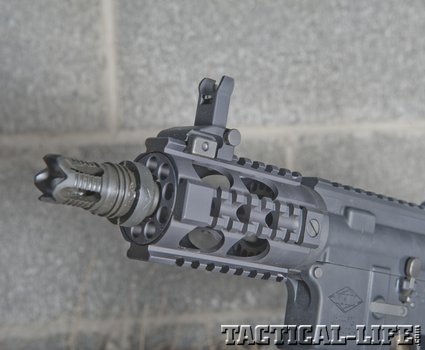 Used with the SBR, this is a great system for entry detail or for an officer who is restricted to pistol calibers. Yankee Hill Machine also makes similar, high-quality ARs with longer barrels, which is good news for those unable or unwilling to deal with the Class 3 paperwork. For more information, visit yhm.net or call 877-892-6533.