I learned to shoot in the dark. Literally. My family used hounds to hunt raccoons and when the dogs treed, us youngsters did the shooting. They started with the youngest and worked up through the ages. Grandpa explained sight picture and trigger control and shined the light. Shooting the raccoon was a big deal, and I learned if I did not make the shot on my first attempt, I would not get another. My older cousin rarely missed.

As we got older, Grandpa rewarded our work with ammunition. For the most part, I learned to shoot on my own. In truth, it was the informal shooting competitions with my older cousin that drove my will to improve. It still does. 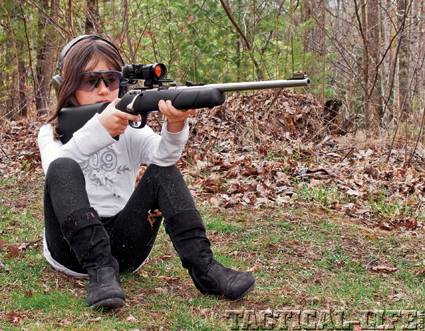 With my oldest son, I made the mistake of assuming he had the same desires. To me it seemed natural. I tried to teach him technique and how to shoot itty-bitty groups on paper. He lost interest and has never shown a desire to shoot since. That was my fault. With my youngest son, Bat, I took a different approach. My method was driven by the fact that kids, more than anything else, like to have fun. So, I made a conscious effort to make our trips to the range entertaining. Sure, safety was first, but I did not act like a drill instructor and did not demand he shoot at paper targets.

Thompson/Center’s Hot Shot is one of the lightest youth rifles you can buy. It only weighs three pounds!