It’s no secret that the Second Amendment is under attack. Yes, there are the expected attackers like Joe Biden & Co., who went to work earlier this week and announced a slew of initial actions aimed at gun control. But that’s not what we’re talking about here. There’s another type of attack on guns and it comes from the powers of social media. We’ve long maintained that our posts on Facebook and Instagram don’t get near the reach they should. Then there’s YouTube, which is a whole different beast. YouTube doesn’t like guns and this week the video-sharing platform attacked us here at Tactical-Life.com.

So what happened? On Wednesday, YouTube alerted us that it removed some of our content — one video in particular. The video in question was “3 Shots With the Mag-Fed Anzio Ironworks 20mm Sniper Rifle,” which you can now watch in the player above or in its original post on this site. We’ll get to why you can still watch it here later on. Here’s what YouTube sent us:

“We wanted to let you know our team reviewed your content, and we think it violates our firearms policy. We know you may not have realized this was a violation of our policies, so we’re not applying a strike to your channel.”

Over the last two months, the video started doing incredibly well on YouTube; we’re talking millions of views. We posted it years ago, but apparently it finally cracked the YouTube algorithm and the views came rolling in. Great! Right? Well, not so much. When videos start doing well like that, YouTube reviews them more frequently. When it comes to guns, YouTube can very well make up what it wants to have it pulled.

Why was it removed? Here’s the reason we got: “YouTube does not allow live streams showing someone holding, handling, or transporting a firearm.”

As you can all see in the video above, this wasn’t a live stream of any sorts. It was a video filmed sometime circa 2010 with some poor-quality camera or potentially an early iPhone. So we very respectfully responded — and we’re paraphrasing — that “We go to great lengths to make sure our videos adhere to YouTube firearm standards. The video in question is very clearly not a live stream. We would like the video reinstated.”

Obviously we thought someone would review it and see that they made a mistake. No harm, no foul. Well, someone reviewed it, but they doubled down on their initial ruling:

“We reviewed your content carefully, and have confirmed that it violates our firearms policy. We know this is probably disappointing news, but it’s our job to make sure that YouTube is a safe place for all.”

So a video of a man firing an Anzio Ironworks 20mm Sniper Rifle three times is somehow making YouTube a dangerous place? The bottom line is that this video doesn’t violate any of YouTube’s firearm policies. We reviewed them inside and out. YouTube simply doesn’t like guns. And honestly, that’s fine, but just come out and ban guns on your platform like you want to instead of dancing around it and making things up.

The other good thing is that we still have the video, as you see above. You may have noticed we switched over to a new video player on our network of sites back in late 2018; that goes for all videos that we generate ourselves. We host them on our own player and don’t have to work about sharing anything “dangerous,” like how to build your own firearm or apparently just showing a 20mm rifle firing. So, enjoy the video and this bit of freedom on the Internet we still control. 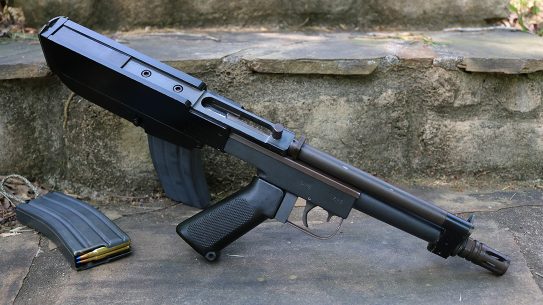 Born out of a Colt effort to arm downed pilots, the Bushmaster Arm Pistol...