In the middle of night at a restricted shooting range, a seasoned Navy SEAL clipped a KAC UNS (Universal Night Sight) on the forward Picatinny rail of a 7.62mm NATO weapon, similar to the NV unit on the cover, and took aim. I couldn’t see the trigger-puller several feet away, let alone the 6-inch steel discs several hundred meters distant on the almost moonless night in Florida. Every shot that was fired was followed by a steel clang. In disbelief, I asked to try and was amazed how the targets were readily visible with the UNS placed in front of the pre-registered telescopic sight. At that distance, with almost no moon and no artificial light, I got a hit every time I pulled the trigger! The current record for a nighttime engagement with the UNS is a successful hit at 1,340 meters by a Marine in Afghanistan. Wow, I thought, how can this be?

Knight’s Armament Company (KAC) has a long history of recognizing, developing and producing just exactly what American warfighters need. As an example of Reed Knight seeing solutions before others see the problem, when he saw coverage of American warfighters engaged in combat in the Caribbean in the ’80s, Reed was appalled to see that soldiers had to tape flashlights to the forends of their weapons to fight at night. From that observation, he developed his KAC RAS (Rail Adapter System) that is on just about every M4 today. 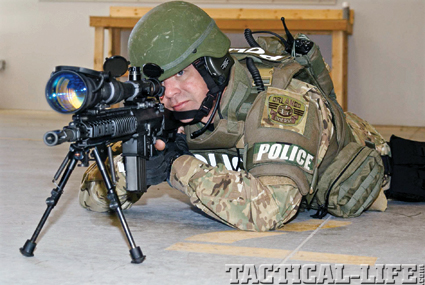 KAC NVG is also used by LE, as seen here with the Orlando Police Department S.W.A.T. team, who appreciate the ability to see clearly no matter what the lighting conditionshappen to be.

That simple solution helped extend the M16/M4 as an effective battle rifle well into the 21st century, and has been so successful that the Pentagon has included similar rails for sighting optics and night vision gear on most handheld weapons in this country’s military. Reed also saw that darkness should help—not challenge—our warriors, so he began developing a family of outstanding night vision gear. As a result, Reed has the UNS series now type-classified to KAC as the AN/PVS-22, AN/PVS-26 and the new AN/PVS-30. This has ensured that American trigger-pullers maintain undisputed superiority in their ability to conduct day or night operations and place precise shots that are limited only by the ballistics of their weapons. The ability to deny the cloak of darkness to terrorists—who once felt safe moving, striking or placing deadly IEDs at night—has saved many American and western troops from injury or death. 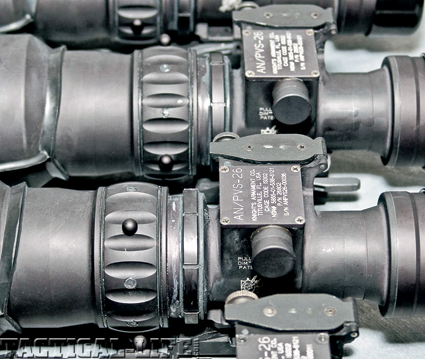 The SNS is descended from the KAC AN/PVS-26, which has been used for years by Spec Ops warfighters.