The history of the 10mm cartridge, like most, is populated with a bit of myth, exaggeration and the occasional credit where none is due. Given that many who were initially involved with the cartridge are not around anymore, the exact truth can be a bit elusive. But there are a few common things among all the stories that are critical.

The 10mm cartridge was not created by one person or during one event. As with most cartridge development, it began as an idea that many worked on—an idea that had been around a while before it gained any popularity.
Col. Jeff Cooper had expressed that a 200-grain bullet in a .400 caliber traveling at around 1,000 feet per second (fps) would be an excellent pistol cartridge. The .41 Magnum met this requirement at the time, but no semi-auto round did. It was the early 1970s, and Whit Collins was already looking at a stronger cartridge for the 9mm Browning Hi-Power. Cooper’s idea prompted Collins to try to make something similar to use in that platform, resulting in the .40 G&A. This got them thinking about making a longer case to work in the 1911 platform. Cooper continued with his idea and the .40 Super was created. Then, he eventually collaborated with the makers of the Bren Ten, which ultimately resulted in the 10mm Auto. There is no doubt that Jeff Cooper had a strong hand in the idea, but he did not “invent” it, as some have claimed. The 10mm Auto cartridge ended up being a bit stronger than his original idea, but he certainly was a fan. 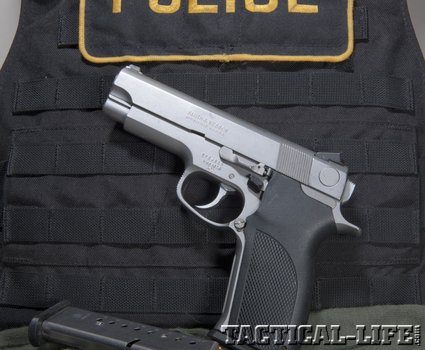 The second most important turn of events came when the FBI starting using the 10mm Auto round. Though it later resulted in the birth of the .40 S&W, the FBI is responsible for introducing the 10mm Auto to mainstream law enforcement. Local and smaller agencies often take the FBI’s lead, if for no other reason than their rigorous testing and evaluation processes. One thing is certain: The FBI’s testing in 1987 started the 10mm Auto on its journey into the police world.