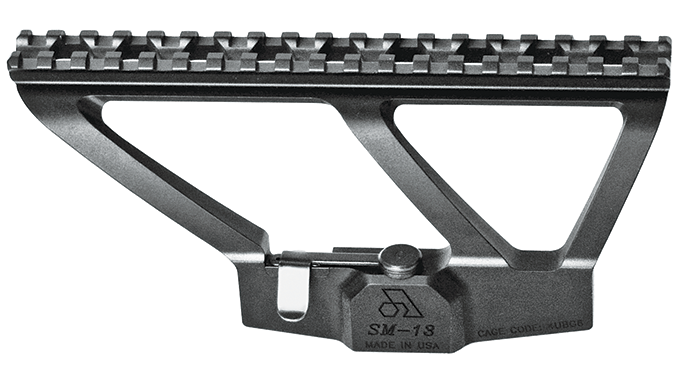 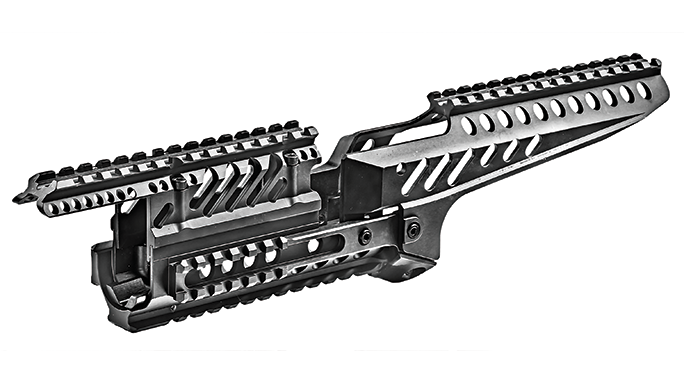 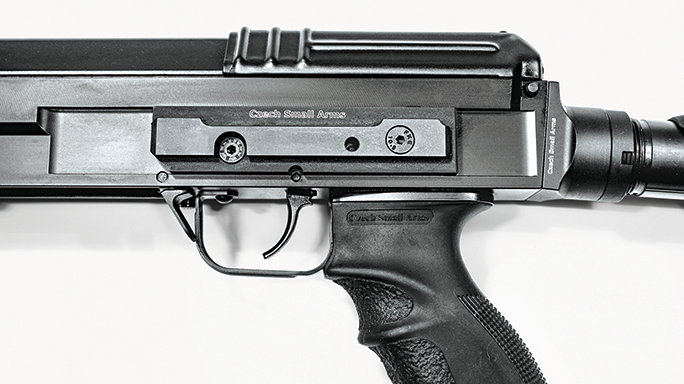 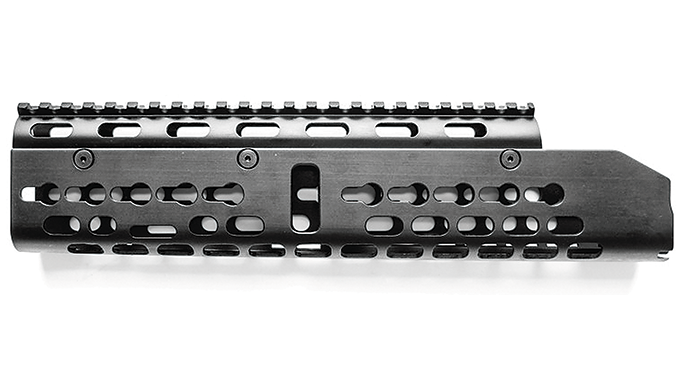 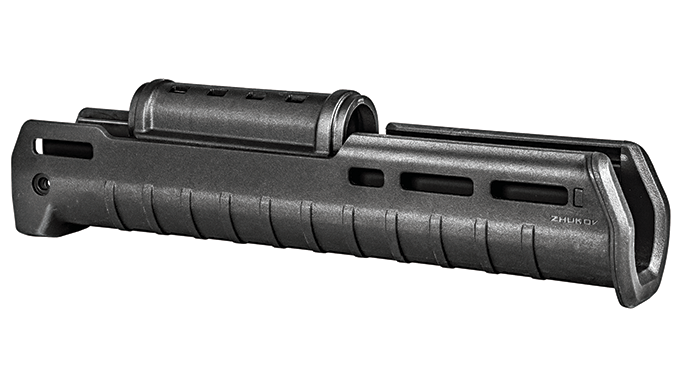 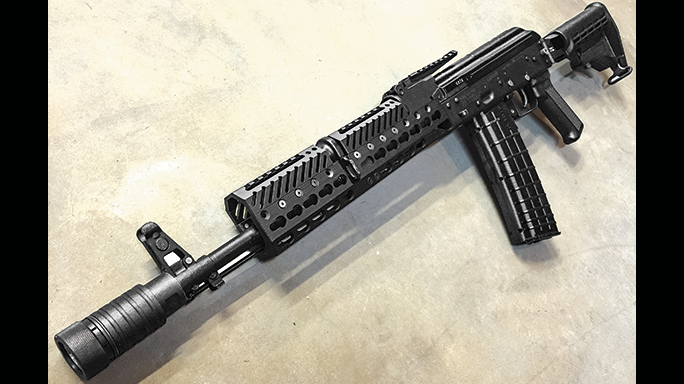 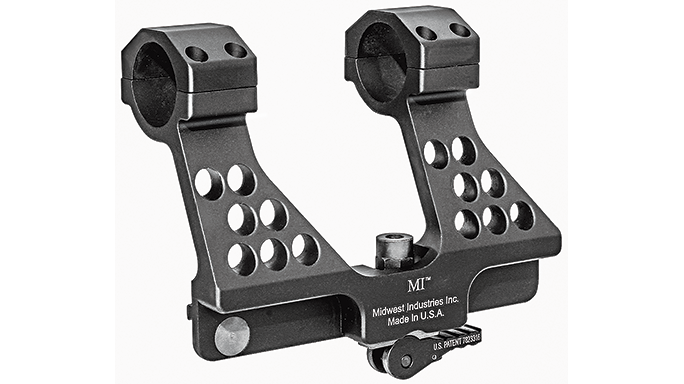 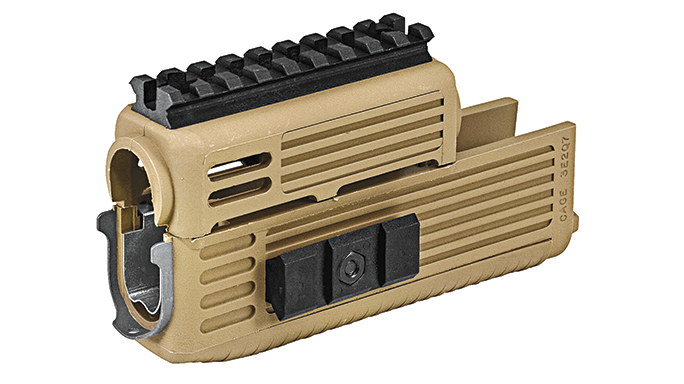 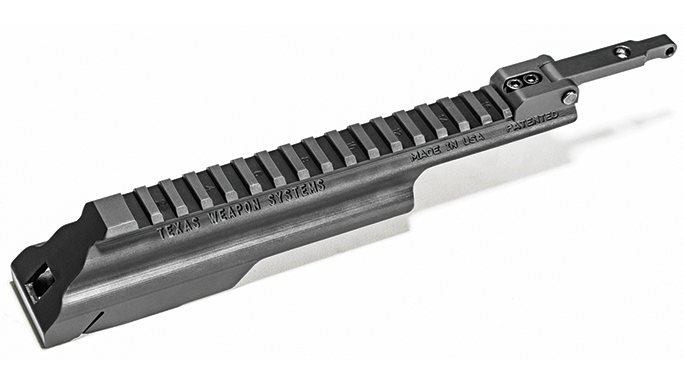 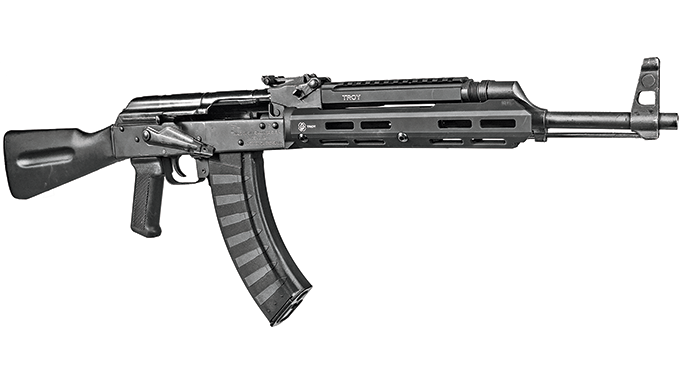 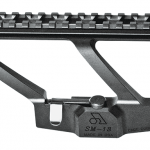 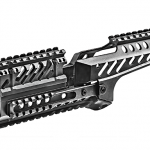 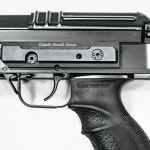 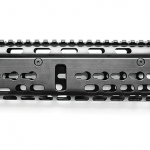 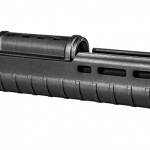 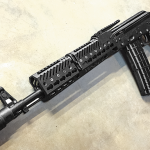 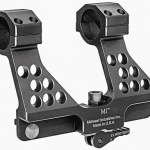 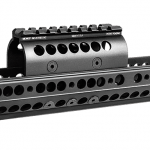 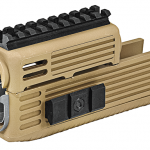 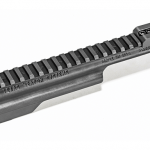 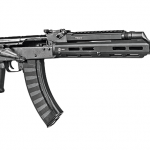 It seems at times that the Soviets actively resisted the idea of accessories on AKs. The very design of the AK makes mounting accessories like optics, lights or lasers a challenge.

However, thanks to some enterprising manufacturers, AK enthusiasts today have a wide range of modern scope rail mounts and advanced handguard systems available for mounting their preferred gear on a favorite Kalashnikov.

Read on to find out about some of the best options available out there today.

Arsenal in Las Vegas has the exclusive right to distribute Bulgarian AKs in the U.S., and as a result it also receives significant government contracts. The result of one of these military contracts is the now commercially available SM-13 scope mount. This Picatinny rail top mount installs on the side receiver rail of many AKs and is CNC machined from billet aluminum, allowing for the use of any optic or accessory with 7.625 inches of rail space. The quick-detach lock system is steel for a secure hold that will maintain zero. The entire mount weighs less than 6 ounces. (arsenalinc.com; 702-643-2220)

Command Arms Accessories offers possibly the most comprehensive AK rail system imaginable with the five-rail XRS47. The system is made up of three solid aluminum parts that are secured together once installed on your rifle. These part can also be used independently. The rear rail system covers the dustcover and offers a stable mount for optics. There is also an extended forward top rail for red-dot optics or offset laser units. Finally, a handguard rail system allows for multiple accessory options and includes rail covers for improved comfort. Disassembly, cleaning and maintenance can be performed without removing the unit. (commandarms.com)

The Czechs have a long and proud arms industry and were not willing to go along with the AKM trend. Instead, they developed their own distinct rifle, the vz. 58, which may appear similar to the AK but it is entirely different. It does suffer from the same difficulties in optics mounting, however, so CzechPoint has developed a Russian-inspired solution with its new Receiver Side Rail mount. (czechpoint-usa.com)

The Krebs Custom UFM KeyMod Handguard System for AKM Rifles is available in a long version that covers most of the exposed barrel. Built from 6061-T6 aluminum, the handguard is lightweight and features the popular KeyMod mounting system for easy and fast installation of rails and accessories. The long top rail attaches securely to the lower handguard with either six screws or with six precision pins in Kreb’s quick-detachable upper. Note that installation will require modification to any non-Saiga sporter gas tube, and it will only fit a standard AKM 0.595-inch-diameter barrel. (krebscustom.com; 847-487-7776)

While Magpul may have made a name for itself with its popular AR-15 parts and accessories, the company has also embraced that firearm’s erstwhile opponent with open arms. New for the AK rifle from the company is the Zhukov Hand Guard. It is a modern option for the AK, providing an extended overall length for a broader range of handling and shooting styles. An aluminum chassis undergirds the polymer body to enhance strength and heat dissipation, and M-LOK slots allow for a wide range of attachable accessories. It includes a matching replacement top cover. (magpul.com; 877-462-4785)

Manticore Arms is offering a new Extended Alfa Rail KeyMod Forend for standard AKs. This extended aluminum handguard system does a much better job of protecting the support hand, and it extends farther forward to twice the length of a factory handguard. It features a KeyMod accessory attachment system on multiple locations along the side and bottom, and it installs easily using the standard factory hardware. An optional top cover is also included with substantial rail space for optics. Despite the added length, the unit weighs only slightly more than the factory handguards. (manticorearms.com; 630-715-0334)

The Midwest Industries SVD 30mm Scope Mount for the classic Soviet SVD rifle will hold zero, weighs very little, sits low for an enhanced cheekweld and has a tool-free quick-detach system. These are offered with different sized rings for your preferred optic, and they will also fit similar rifles such as the TIGER and Romanian PSL. (midwestindustriesinc.com; 262-896-6780)

The Extended AK-SS Universal Handguard fits most milled- and stamped-receiver AK variants easily. This system replaces the short handguards with one that is 9.5 inches long for improved user comfort and added accessory space. The 6061 aluminum construction and longer length also protect the hand from barrel heat, and movable rail sections are included as well as multiple QD sling swivel points. Also included is a top rail cover for red-dot or other optics that attaches to the handguard and fits over the existing gas tube. The whole unit adds less than 12 ounces of weight. (midwestindustriesinc.com; 262-896-6780)

It is hard to beat the TAPCO Intrafuse AK Handguard for simple and clean versatility. Made from a tough polymer, this handguard easily replaces the standard lower and upper handguards on most any AK variant. It features an internal heat shield and pre-attached side rails for lights or laser accessories. The top rail allows the installation of red-dot or other optics, and there is a removable rail cover at the bottom that meshes seamlessly with the rest of the forend. Black and dark earth versions are available. (tapco.com; 800-554-1445)

The ideal place to mount an optic on any rifle, especially one with magnification, is close to the shooter’s eye, but on an AK the receiver’s dustcover is not stable enough to hold zero. You can, however, replace it with the Texas Weapon Systems Dog Leg Rail Gen III. This rail replaces the standard AK rear sight for a rock solid mount. At the rear, the aluminum receiver cover is locked down by a cam lock release button. The top features a very low-mounted Picatinny rail for optics that also allows for co-witnessing. The top cover is easy to rotate out of the way for cleaning and maintenance.  (texasweaponsystems.com; 512-554-1136)

TROY’s AK-47 handguard rail system is made from aircraft-grade aluminum with stainless steel inserts and a hardcoat-anodized finish. Despite the “short” in its name, the handguard is actually 4 inches longer than a standard factory handguard and the top rail offers 5 inches of Picatinny real estate. Cooling holes (available in Alpha, KeyMod or M-LOK) also allows the user to install TROY rail sections, and the round shape is very comfortable. These handguards fit milled- and stamped-receiver rifles. (worldoftroy.com; 866-788-6412) 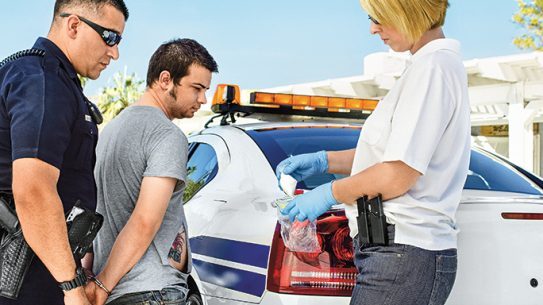 It Happened To Me: Meth Lab Surveillance Standoff

Law enforcement officers at the scene of a presumed meth lab run into a...