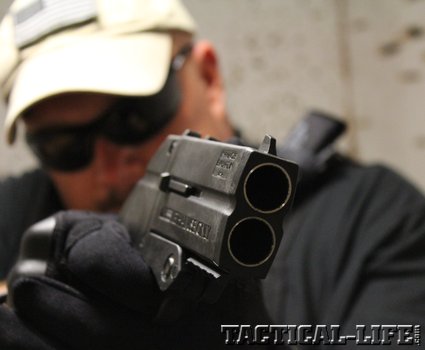 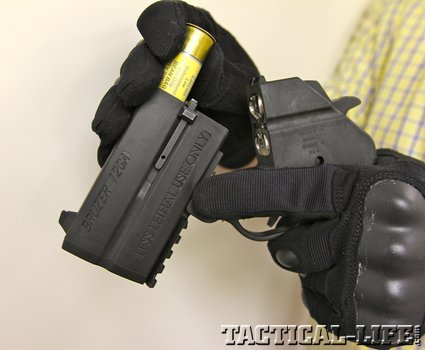 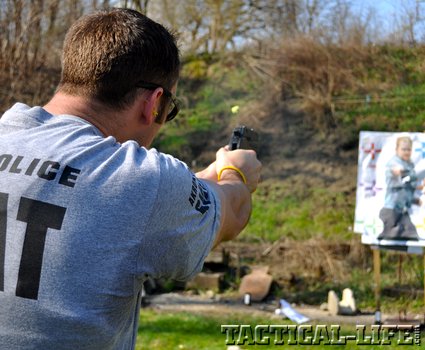 3 of 3
DSC_0100_phatch
The Bruzer Less Lethal 12-gauge lives up to its name, giving assailants a heavy dose of shock and ouch! 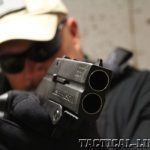 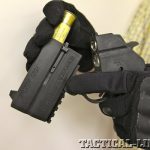 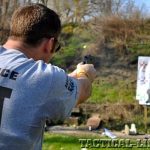 The Demon Dog was a bad actor. An outlaw biker, meth cooker, three-time loser and very large and dangerous man, Daniel “Demon Dog” Moss had felony warrants for arrest for methamphetamine manufacturing, possessing weapons under disability (his previous violent felony convictions prevented him from owning or possessing firearms—let alone selling a .40 caliber semi-auto pistol to a police informant), and violating parole. When the Monroe Police Department issued narcotics search and felony arrest warrants for the Demon Dog’s residence, it made sure to give a call to the department’s elite SWAT team.

After a several-hour recon and planning session, the tactical team practiced multiple rehearsals of their planned approach and entry in a parking lot mapped out with traffic cones and chalk marks. Satisfied, they, loaded their weapons and, at zero-dark-30, began their journey, with a bevy of uniformed officers (assigned to secure the perimeter) and narcotics case detectives (tasked with making the arrest and conducting the search) in tow, to the Demon’s digs on the city’s south side.

After dropping off on a street to the rear of the residence, the team attempted a stealth approach to the building’s back entrance, which was described by the narcs as the primary entry point. The only problem was that a neighbor’s large mutt in an adjacent yard started barking. The team leader, positioned in the middle of the stack of tactical operators, saw a large, bearded head peering through the rear kitchen window; he shouted, “Compromise! Compromise!”—the order for his men to “go dynamic.” As the team made its way to the rear steps, the back door burst open, and a wild-eyed, shirtless man stepped out screaming, “What the (blank)! Who the hell are you?” The point man’s M4-mounted light illuminated the Demon Dog in all his tattooed, outlaw, biker glory. “Monroe Police Department, you’re under arrest: Get down on the ground!” The number-two man flanked out to the right and covered the suspect while the point man repeated his demand: “Get down on the ground!” Demon Dog, apparently under the influence of his own illicit drugs, just balled his fists and yelled, “F- you!” 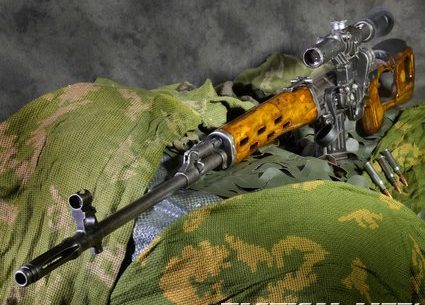