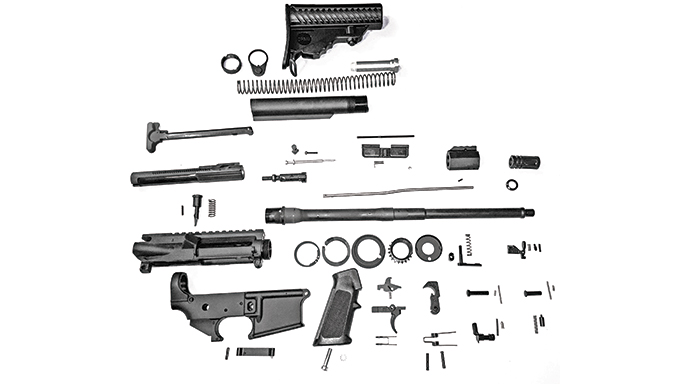 1 of 6
DIY: 21 Steps For Properly Building Your Own AR
Excluding the individual parts in subassemblies, the Oracle Rifle Kit from DPMS began with roughly 70 parts. The author also used a DPMS lower receiver. Choosing top-notch parts and installing them correctly will result in a high-quality AR carbine. 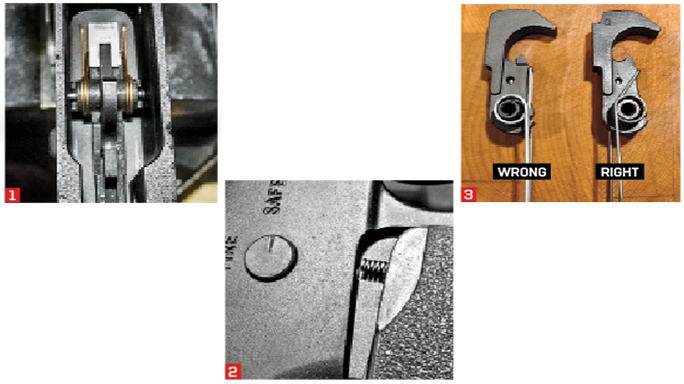 2 of 6
DIY: 21 Steps For Properly Building Your Own AR
Steps 1-3 of the lower receiver assmebly 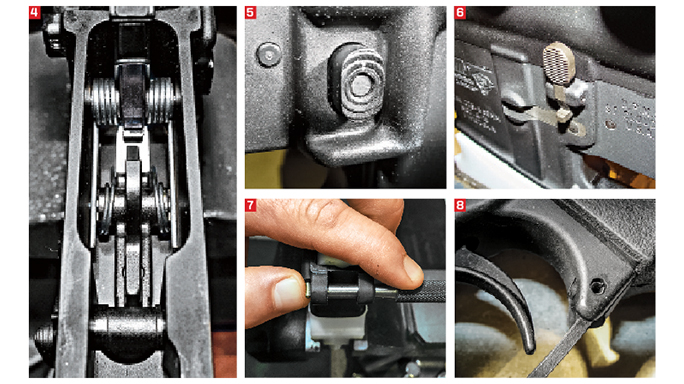 3 of 6
DIY: 21 Steps For Properly Building Your Own AR
Steps 4-8 of the lower receiver assmebly 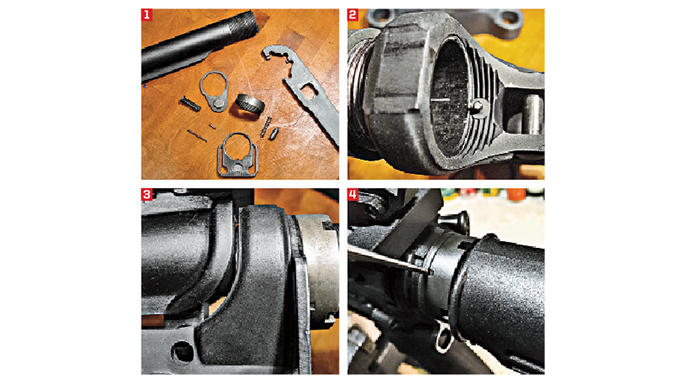 4 of 6
DIY: 21 Steps For Properly Building Your Own AR
Steps 1-4 of the collapsible stock assmebly 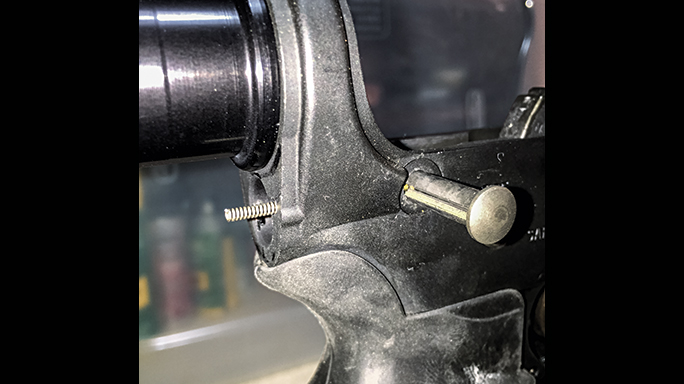 5 of 6
DIY: 21 Steps For Properly Building Your Own AR
Make sure you carefully install the takedown pin and takedown detent spring before adding the A2 stock extension and fixed buttstock onto the AR’s lower receiver. 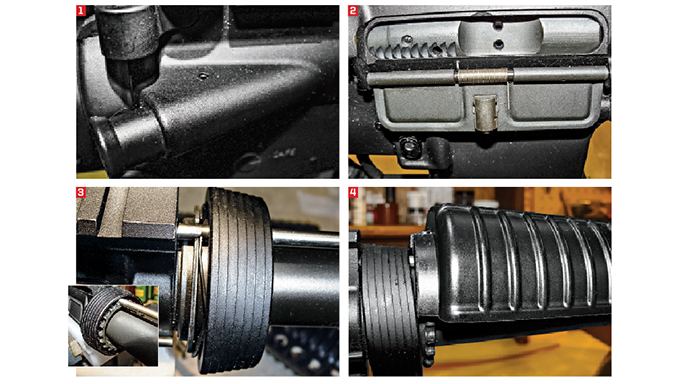 6 of 6
DIY: 21 Steps For Properly Building Your Own AR
Steps 1-4 of the upper receiver assmebly 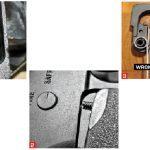 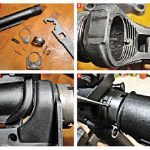 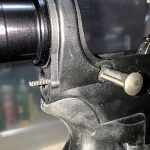 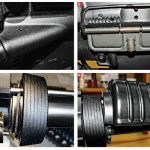 When I was a kid, about a million years ago, I loved to build things. Legos were my prime construction materials as a little boy. Never outgrowing the fascination with building things, and not having reached adulthood yet, I discovered that the AR rifle is easily the most accessorize-able firearm in the world.

With more unique, user-friendly, customizable parts than any other, I had found my “big boy” Legos. With minimum tools, a modicum of basic mechanical skill and an understanding of the rifle’s operation, most anyone can build their own personalized AR, all while saving an additional 11 percent on the purchase since it is exempt from federal excise tax. And you can build it your way.

For this build, I selected a DPMS lower receiver and an Oracle Rifle Kit as my foundation, based on my experience with the company’s quality and reliability. I also appreciate that the Oracle kit has a bolt factory-headspaced to the barrel as well as several subassemblies completed by DPMS, guaranteeing correct assembly of those parts and shortening the build time. An Ace SOCOM stock, a free-floating GunTec USA KeyMod forend and an Ergo grip rounded out my personal choices for this build, but the assembly instructions here are predominately the same for similar products. For liability and reliability reasons, I recommend that the barrel installation, bolt headspacing and gas block/front sight installation be completed by a qualified gunsmith. However, the bulk of a basic AR build is a DIY dream.

To simplify assembly, separate the upper and lower receiver parts into groups and build one half at a time, noting that some assembly must be completed in a specific order, such as the fire control group or bolt carrier group. After completing installation of each individual part, confirm it functions correctly through its range of motion before moving forward in order to prevent disassembly to correct an error later.

Installing The Stock: Pull the collapsible stock’s latch straight down, away from the stock body, and install it on the lower receiver extension. When releasing the stock latch, it should be held captive throughout its range of motion.

For this DIY build, the barrel and gas block (or front A-frame sight assembly) should be installed and headspaced by a qualified gunsmith. This would include the barrel nut, delta pack and handguard cap for two-piece handguards and/or the installation of a free-floating forend, including the gas tube.

For the upper assembly, I prefer the DPMS Panther Claw upper receiver block, or similar, to allow work to be completed without the upper receiver being completely shrouded by a “pancake type” block, but you can work without a block for some assembly, if necessary.

Now you are ready to install the upper assembly on the lower and complete a basic function check.

With the safety selector in the “safe” position, clear the weapon and make it safe by removing the magazine, pulling the charging handle all the way to the rear and locking the bolt carrier assembly in place with the bolt catch. Visually and physically inspect the chamber to make certain it is empty. Repeat as necessary to ensure the rifle is not loaded before proceeding. Once the chamber is confirmed to be empty, you may proceed to the next step.

Close the bolt by depressing the bolt catch. With the safety selector in the “safe” position, point the unloaded weapon in a safe direction and pull the trigger. Nothing should happen. Moving the safety selector to the “fire” position and pointing the unloaded weapon in a safe direction, pull the trigger but do not release it. The hammer should fall with an audible click. Without releasing the trigger, grasp the charging handle and re-cock the hammer, simulating the firing of a cartridge during the normal cycle of operation. Release the charging handle to close the bolt. Release the trigger. You should hear an audible click as the disconnector (the secondary sear engagement point) releases the hammer to the primary sear engagement point, the nose of the trigger. Return the safety selector to the “safe” position. This completes the basic function check.

If you have verified the correct function of each individual part during assembly, and the complete rifle passes the basic function check, your DIY rifle is now ready for range time, the goal of your DIY experience.

Ultimately, the fantastic thing about the AR is its user-friendly customization. With basic tools and mechanical skill set, anyone can build a reliable and unique AR using an almost unlimited choice of parts. 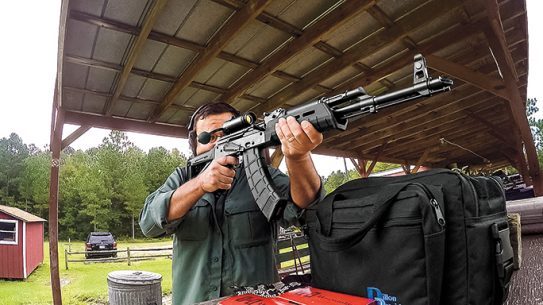