The following is a press release from Nosler

Nosler Inc. announced today the release of the 22 Nosler, a new cartridge designed to transform any standard AR-15 into the fastest, most powerful .22 caliber available for the platform, with the least amount of modification. The new addition to Nosler’s cartridge family, which also features optimized 6.5mm, 7mm, 30 caliber and .338 magnum class rounds, delivers 30% more energy and is nearly 300 fps faster than a 223 Remington/ 5.56 NATO.

Born from the idea of creating the most powerful .22 caliber centerfire cartridge that would readily function in the AR platform, the 22 Nosler’s case design takes advantage of the AR-15’s unparalleled modularity, making the conversion from a standard 223 Remington/ 5.56 NATO to the 22 Nosler simple, requiring only a swap of the upper to the new chambering and switching out to a 6.8 Rem SPC magazine. This effortless two-step retrofit will allow shooters to experience the 22 Nosler’s lightning fast, hard-hitting performance, while still being able to use their existing 223 bolt carrier group.

“The AR-15 is indisputably one of the most popular firearms among shooting enthusiasts across the globe” said John Nosler, Executive Vice President for the company. “While there are other hard-hitting cartridges that exist for the platform, as far as .22 caliber is concerned, nothing compares to the performance of our newly engineered 22 Nosler case. It was important to us that every AR-15 owner could instantly customize their existing rifle to 22 Nosler without any fancy gunsmithing. In keeping with that goal, a simple switch of the magazine and upper will do the trick. With a cartridge innovation this significant, any shooter running other .22 cals in their AR-15, will at the very least, have to reconsider their efficiency.”

The 22 Nosler is a SAAMI standardized cartridge making for consistent brass and chamber dimensions industry wide. The company will be supporting the new cartridge with Nosler Brass and ammunition, with plans to chamber their full line of M48 bolt action rifles in 24″ barrel configurations in the future. Complete uppers and magazines for 22 Nosler® conversions will be available at major sporting goods retailers nationwide.

22 Nosler ammunition will initially be loaded in the company’s popular Match Grade and Trophy Grade Ammunition lines in the following offerings:

For more details regarding the 22 Nosler please visit www.22Nosler.com 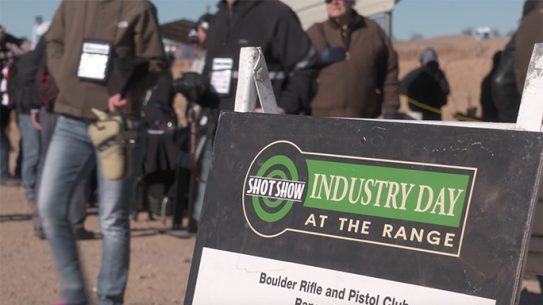 SHOT Show 2017: Industry Day at the Range with Aaron Barruga