by Chuck Taylor
in Ammo, Gear
0

0
SHARES
0
VIEWS
Share on FacebookShare on Twitter
Without a doubt, the .308 (7.62x51mm NATO) remains one of the most, if not the most, popular precision rifle cartridges in history. First appearing in the late 1950s as a replacement for the venerable .30-06 for the United States military, the .308 has evolved to the point where literally everything about its capabilities is well known and thoroughly understood. 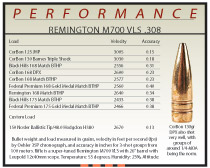 It has an excellent battlefield record, having been used in multiple conflicts as both a service rifle and machine gun cartridge. Even today, though, as a service rifle cartridge, it was “sort-of” replaced in the 1960s by the 5.56x45mm NATO (.223), and it can be found in the hands of SpecOps operators around the world, usually being used in some version of the ubiquitous US M-14.