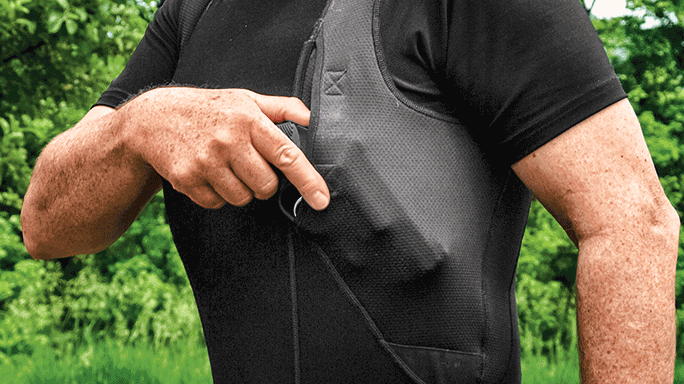 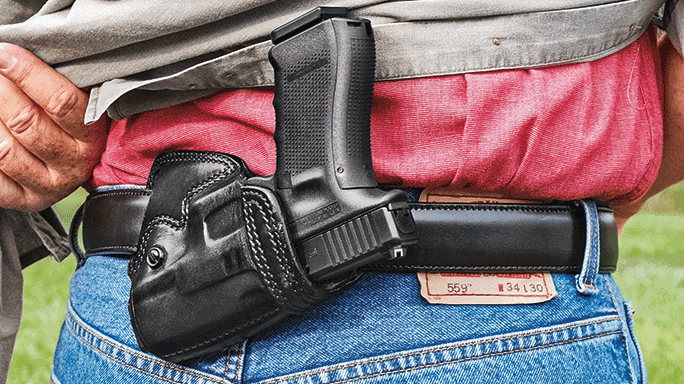 2 of 6
Maximum Concealment: 4 Holster Options For Everyday Carry
Small-of-the-back rigs like this Galco SOB make it easy to carry a gun discreetly with a jacket. 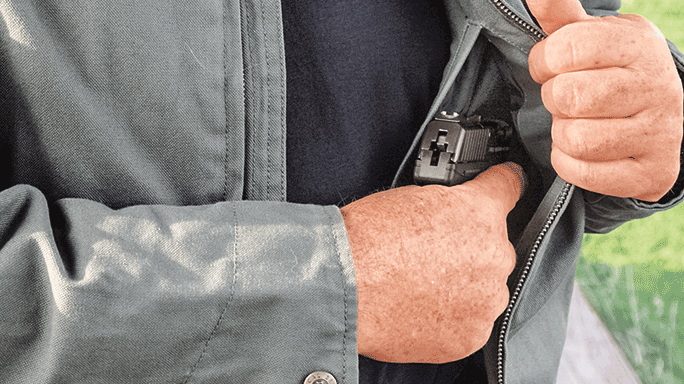 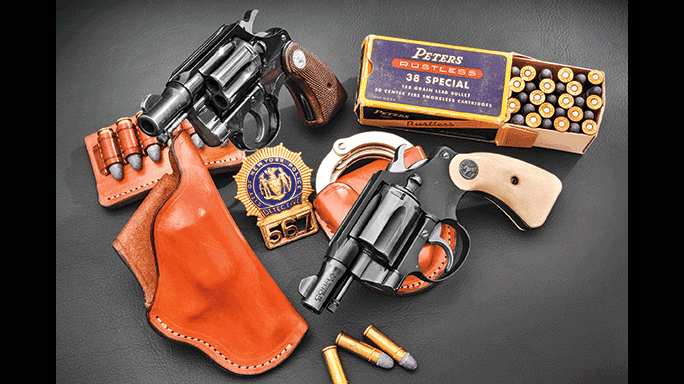 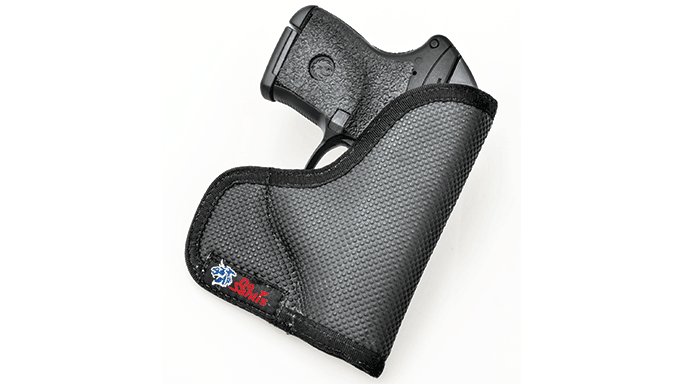 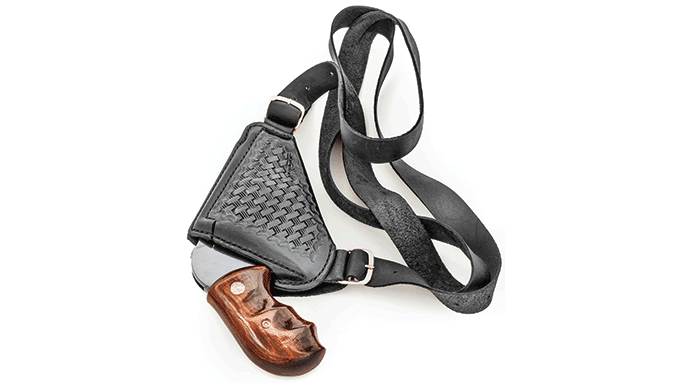 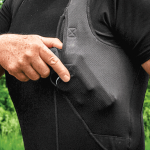 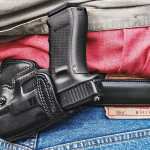 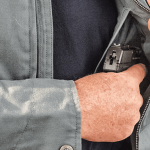 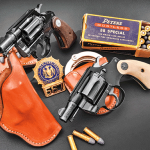 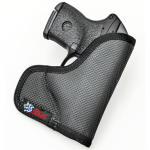 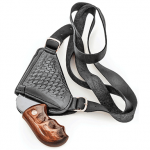 Concealed carry is relevant to law enforcement, whether you’re in uniform or plainclothes.

What might be a backup gun for uniformed officers might be a primary weapon for detectives or those working undercover. In the 1930s and well into the late 20th century, detectives and federal agents wore holsters under their suit jackets, generally belt rigs or shoulder holsters. Undercover operatives faced a greater problem of concealment altogether, and hiding a handgun was essential. Over time, various concealed-carry clothing evolved, first for law enforcement and later for the civilian market. Today, it is possible to carry concealed without a trace and without using a conventional holster. The choices depend upon the assignment and, of course, the gun itself and one’s necessary level of concealment.

Back in the day, a detective or undercover agent had a finite number of carry gun options, nearly all of which were .38 Special snub-nose revolvers like the famous Colt Detective Special, which provided officers with six shots versus the comparable S&W Chief’s Special and similar Smith & Wesson models with five-round cylinders. Holsters were also relatively straightforward—a belt or shoulder holster for day-to-day carry. There was, of course, one other popular option supported by legendary shooter and Colt representative J. Henry FitzGerald, who put forward the idea in 1930 that “The front pocket is a good place to carry a revolver.”

Today’s pocket holsters are made for small-framed semi-autos and revolvers and designed for easy carry in a front trouser pocket. With modern metallurgy and polymer frames, caliber is no longer a constant, so a small pistol can be anything from .380 ACP to .45 ACP. Pocket holster materials range from leather, usually rough-out suede to keep the holster secure in the pocket on the draw, to combinations of nylon for the inside and synthetic exteriors with rubberized textures to keep the holster upright and secure in the pocket. Most designs totally eclipse the profile of the gun and give the impression of a wallet being carried in the pocket. Revolvers are slightly wider due to their cylinders, versus the narrow slides and frames for semi-autos, but all will work well in a pocket holster. A few do require a shirttail or jacket to cover the pocket until needed. This is the most comfortable means of discreet carry but is slower on the draw than a belt holster, inside-the-waistband (IWB) or shoulder holster.

Sometimes the old ways are the best, and as far back as the late 19th century lawmen were carrying revolvers in shoulder holsters. The basic design from the last days of the “Old West” has not changed as much as the guns that occupy them today. The fundamentals of shoulder holster design have never really changed. Improvements have been in harness designs, offside cartridge or magazine pouches, and changes in pouch angle from the original vertical holster pouch to faster-drawing horizontal pouches with thumb-break safety straps, and downward-angled pouches like the famous DeSantis New York Undercover shoulder holster.

Spring-clip designs originated in the late 1890s and were first improved upon in the 1930s by John Berns of Berns-Martin, which offered detectives a new and better way to carry a .38-caliber Colt or S&W revolver. The upside-down Berns-Martin triple draw was not only popular but was copied by A.E. Nelson in the early 1950s and sold as the Handi-Holster. Both were ingenious in their use of a clamshell (split front) pouch held together by a spring-steel clip that went over the cylinder. The holster pouch entirely enclosed the revolver except for the hammer and grip frame, making it extremely secure. The legendary Colonel Jeff Cooper once noted that the Berns-Martin holster “keeps the pistol secure enough for anything up to parachute jumping, and yet permits drawing without releasing any latch or strap beforehand.” When Bianchi International purchased Berns-Martin in 1975, the company adopted the design and began producing a variety of holsters for concealed carry and law enforcement use, including the 9R, which closely resembled the Berns-Martin. This shoulder holster design is best remembered from its use by Steve McQueen in Bullitt. Bianchi’s development of break-front holsters eventually became a staple for law enforcement use, where gun retention had become a major concern. Today there are shoulder holsters designs for virtually every caliber semi-auto and revolver, making this original idea timeless.

While hardly a secure way to carry a handgun, a pistol stuffed inside one’s waistband has been a practice for more than 150 years. The one improvement on that idea is the IWB holster, which today encompasses one of the most prolific of designs and variations from every major holster manufacturer. For this particular means of packing a compact or subcompact semi-auto or snub-nose revolver, the bulk of the gun and the IWB rig will be against your body and hidden from view with the exception of the gun’s grips. This is a very effective carry method, and pistols can be worn in multiple positions; the 4 o’clock placement behind the hip is often most comfortable, and for smaller guns specialized 2 o’clock or “appendix carry” IWB holsters place the handgun in an easily retrieved position forward of the hip. This carry style works for casual attire and for year-round carry where any type of outer clothing, even a T-shirt or sweater, can cover the gun’s exposed grips.

“Deep cover” has many interpretations, from covert to just plain hiding a backup gun where no one is apt to see or expect it. The first option in concealment clothing is one of the various dedicated holster T-shirts on the market. These designs vary from lightweight designs made from regular T-shirt material with sewn-in panels to support various-sized handguns, to compression T-shirts with shoulder holster yokes built in for supporting a variety of handguns and fitted with deep pouches that are sealed off with hook-and-loop closures. Nearly all of these designs are ambidextrous, with the off side used for either a second handgun or, if specifically ordered, spare magazines. Compression T-shirts with pouches already make this possible. Worn under an unbuttoned lightweight shirt, holster T-shirts keep the gun totally hidden and within easy access. When worn under a buttoned shirt and jacket, these designs become some of the most covert carry options available.

Weather is one of the prevailing factors in determining how a gun can be carried concealed, and while holster Ts make summer wear easier, colder temperaturess change the demands, making the holster T-shirt a purely deep-cover option. For weather that requires either a vest or jacket, concealment clothing again offers some very good carry options. Popular jacket and vest styles are available from 5.11 Tactical, Blue Stone Safety Products, UnderTech and Carhartt. Vests and jackets generally have secure inside pistol pockets or are set up to carry a hook-and-loop-attached holster on an inside pocket. Most are ambidextrous, so guns can be carried on either side. Options include hook-and-loop closures to seal off the internal pocket from detection, while others use snap closures. All of them, by virtue of using heavier fabric, make carry totally unobtrusive, even with larger handguns.

With all of these options, it is easy to dress around your concealed-carry sidearm, and while you might not be able to control the weather, with one of these options you will be able to carry your sidearm by the best means possible for any given temperature or situation, rain or shine. 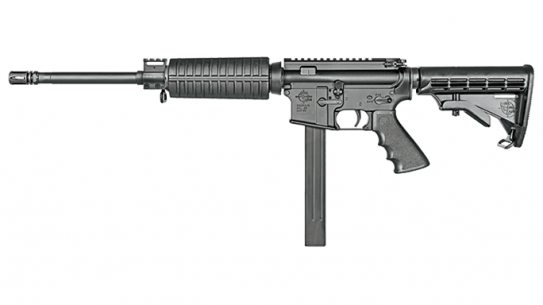