Still relatively new, Remington’s 6.8mm Special Purpose Cartridge (SPC) is gaining acceptance in more military and law enforcement roles. Once a new cartridge hits the market, it’s common for shooters and manufacturers to tinker with original designs to raise accuracy and performance. Over the past five years, the 6.8 SPC has undergone the inevitable evolution, too.

6.8 Background
Reviewing cartridge history, the 6.8mm Remington SPC was designed to increase performance in short-barreled CQB rifles after diminished performance from the 5.56mm NATO when the AR-15 was changed from the rifle configuration to the current M4 carbine. The 6.8 SPC delivers 44% greater energy than the 5.56mm NATO cartridge in the M4 configuration at 100 to 300 meters. The 6.8mm SPC is not the ballistic equal of the 7.62x51mm NATO cartridge; however, it has less recoil, is more controllable in rapid fire, and lighter—allowing operators to carry more ammunition than would otherwise be possible with the larger caliber round. The 6.8mm generates approximately 1,759 foot-pounds of energy (fpe) with a 115-grain bullet. In comparison, the 5.56x45mm round (which the 6.8 is designed to replace) generates around 1,325 fpe with a 62-grain bullet, giving the 6.8mm a terminal ballistic advantage over the 5.56mm of 434 fpe. 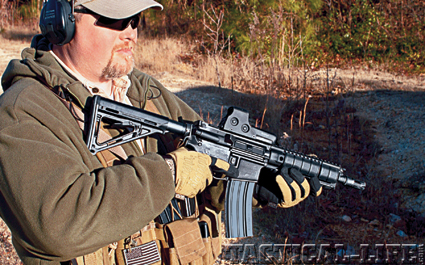 The Barrett REC 7 PDW in 6.8 SPC is manufactured with a Spec 2 chamber, and can take advantage of ammunition loaded to approximately 200 fps faster than “standard commercial” loads.

SPC Development
The 6.8mm Remington SPC (or 6.8x43mm) is a rifle cartridge that was developed with collaboration from individual members of US SOCOM. Based upon the .30 Remington cartridge, it is midway between the 5.56x45mm NATO and 7.62x51mm NATO in bore diameter and velocity. It is adaptable to current 5.56mm NATO firearms, the cartridge overall length being comparable. 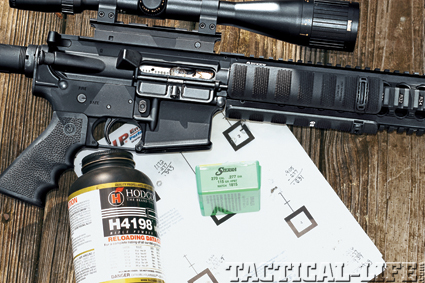 Ruger’s SR556 6.8 SPC is built with a SAAMI Spec 1 chamber, and is not recommended to shoot using higher velocity Spec 2 ammunition.