2
SHARES
207
VIEWS
Share on FacebookShare on Twitter
The Noveske Rifleworks team put their heads together to dream up the concept of re-barreling a MK 46 for 300 BLK to create a suppressed machine gun. The barrel is specially tuned to run this low-pressure round. Shown with Aimpoint CompM4 and AAC MG-SD suppressor.

At every level of military engagement, communication is vital for mission success. For anyone who has tried to shout over the deafening roar of an M249 Squad Automatic Weapon (SAW), much less hear, an alternative with similar capabilities is highly desirable. For those who have not experienced a SAW firsthand, check out the scene in the movie Black Hawk Down where the SAW gunner is fighting for his life and that of his fellow team members. After unleashing several bursts from his weapon without wearing ear protection he is practically deaf. 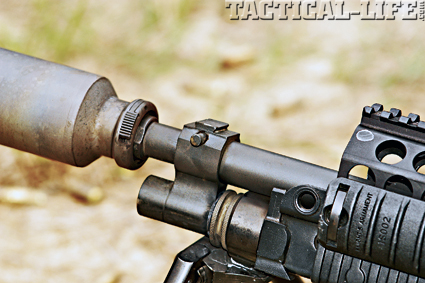 To run the medium-range 300 BLK cartridge properly, the MK 46 SAW only needed a new barrel and gas block.

One solution to tame the SAW’s horrendous muzzle blast took life among several self-professed Oregon gun nuts. “My shop guys were eating lunch and shooting the bull and came up with the idea for a 300 AAC Blackout SAW for fun,” John Noveske said. “They linked up the ammunition, fed it through the gun, and then went and made up the barrel.” What they wound up with is a suppressed MK 46 SAW chambered in Advanced Armament Corporation’s 300 BLK. 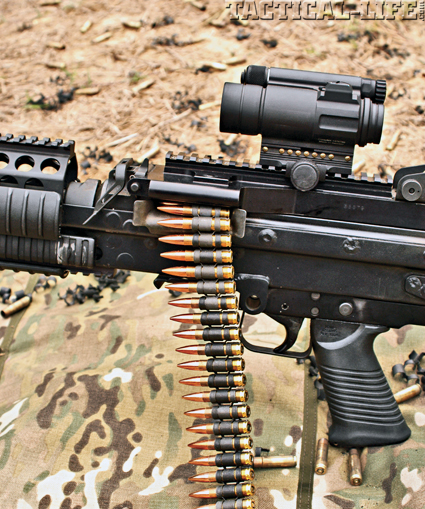 Silent Success
Owner of Noveske Rifleworks, John Noveske has earned a reputation for building highly-accurate AR-platform rifles for over a decade. In his words, “It took a special build on the barrel to make the MK 46 run with the 300 Blackout,” Noveske said. “There’s a lot more to it to build the barrel than just taking a .30-caliber barrel and chambering it. We shortened the gas block, making the barrel as short as possible, so that we could use it with the AAC 762-SD suppressor. We changed the threads to 5/8-24 threads per inch. The barrel has a 1-in-8-inch twist. The magic in how the barrel works is that we specially tuned the barrel to operate with this low-pressure round. We were able to achieve the goal of making it run with the same springs and components of the MK 46. You can switch the barrel from 5.56mm NATO to 300 Blackout without changing the springs, bolt or anything else. No alterations need to be made except a barrel swap and ammo change.” 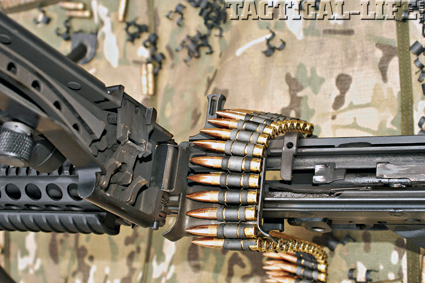 Belt-fed or firing from a box mag, the modified SAW retains all the original internal parts and has a high rate of fire.