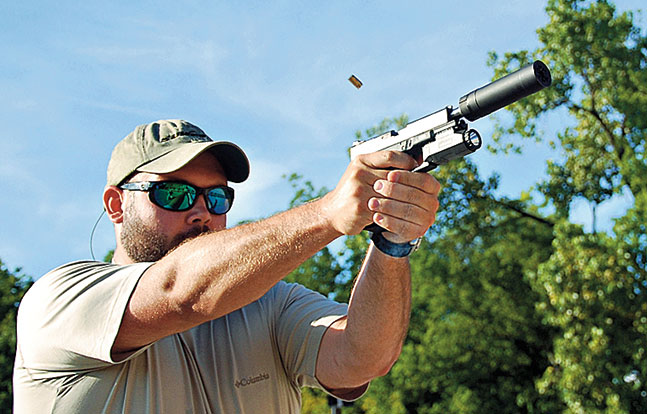 1 of 2
Hush Hush: AAC’s Silent Ti-RANT Suppressor
“As expected, the Ti-RANT 9S was most effective when used as designed. By adding approximately 5 cubic centimeters of water, the signature was significantly reduced.” 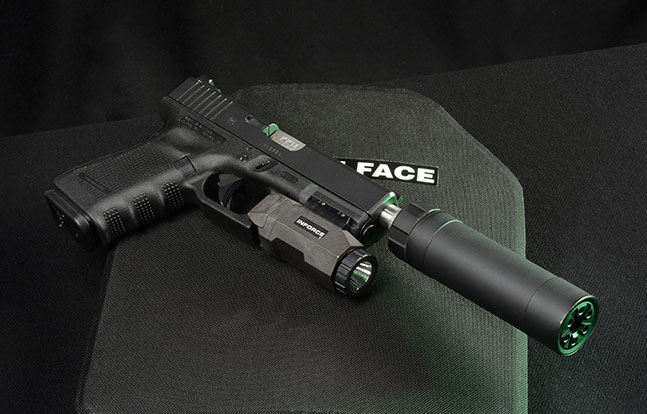 2 of 2
Hush Hush: AAC’s Silent Ti-RANT Suppressor
Designed for special missions, AAC’s Ti-RANT 9S is a smaller version of the popular Ti-RANT 9 that is meant to be run “wet.” The author tested it on a custom Glock 19 Gen4 with an Inforce APL (shown). 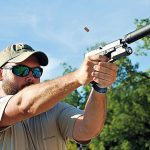 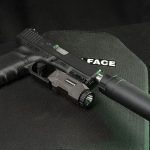 I am fortunate to live within driving distance of Atlanta and Advanced Armament Corporation (AAC). Over the years, I have visited the company’s facility and have had the opportunity to shoot and evaluate a number of its suppressors and AR rifles. AAC has become a major leader in the suppressor industry with a very impressive client list. In the process, AAC has branded itself with multiple logos, unique advertising, a great website and a blog.

The company has also created a loyal following of customers that reminds me of the Glock craze in the early years. AAC products and ads seem to be everywhere!

Several years ago, AAC introduced the Ti-RANT as the company’s next generation of high-performance pistol suppressors. Available in both .45 ACP and 9mm, the Ti-RANT suppressors address size, weight and noise reduction through design, materials and engineering. The outer tube of the Ti-RANT is manufactured from Grade 9 titanium that offers improved strength and a significant weight reduction when compared to an aluminum or steel tube. The internal baffles are an improved K-baffle design that are precision machined from a combination of 17-4 PH stainless steel (blast baffle) and Type III hardcoat anodized 7075-T6 aluminum. To maximize sound reduction, and to take advantage of the titanium weight reduction, the Ti-RANT has a larger tube than the Evolution 9. The Evolution 9 is 7.73 inches in length, 1.25 inches in diameter and weighs 9.7 ounces. By comparison, the Ti-RANT tube is 7.9 inches in length, 1.38 inches in diameter and weighs only 8.6 ounces. The Ti-RANT offers a 13-percent increase in internal volume with a 1.1-ounce weight reduction.

The Ti-RANT features an improved version of AAC’s ASAP (Assured Semi-Automatic Performance) system. The ASAP is a Nielsen-type recoil booster that is located in the rear cap and consists of a precision-machined piston that is spring loaded in the cap. The piston has 10 sprockets that interlock into the back of the suppressor tube, giving the Ti-RANT an exceptionally tight and consistent lockup. The booster is essential to reliable operation in Browning-type recoil-operated pistols. The ASAP also allows the suppressor to be adjusted to minimize any shift in the point of aim/point of impact. To adjust for any shift in the point of impact, the suppressor is pulled forward, away from the pistol, and rotated. The spring then re-indexes and locks the tube against the sprocket.

A spin-off of the original Ti-RANT series was the S-model series. The Ti-RANT .45S was developed for the U.S. Naval Special Warfare community. These combat units wanted a compact suppressor for use with the HK45 compact pistol. The compact HK45C is 7.2 inches in length, and the units found that the 8.74-inch length of the Ti-RANT .45was too long for the mission’s requirements. AAC subsequently developed the Ti-RANT 45S to meet the requirement. The overall length of Ti-RANT 45S is just 6.42 inches. The 45S provides an 18-decible sound reduction when dry and a 28.4-decibel reduction when wet. This compares to -31 decibels and -41 decibels for the full-sized Ti-RANT. The end-users felt that the tradeoff in performance was balanced by the smaller size.

I recently tested a Ti-RANT 9S at the range. For a host, I selected a Glock 19 Gen4. The G19 is close to a perfect carry pistol. It is small enough to be easily concealed yet large enough to run effectively. The 15+1 magazine is ample for most applications, and the G19 can accept the larger G17 or the 33-round G18 magazines. It is no surprise that many in the intelligence and special operations community “live” with a G19 close by.

In preparation for this evaluation I made several modifications to the G19. The first call was to Hilton Yam at 10-8 Performance. His Glock rear sight is CNC machined from heat-treated 4140 bar stock to withstand the knocks and drops that come with daily carry. The rear aperture is U-shaped for a faster and more intuitive alignment. The second call was to Brownells to order a Warren Tactical replacement front sight. I selected a tritium dot sight with a white ring to match the U-shaped rear aperture. The final call was to KKM Precision for an extended/threaded barrel. KKM barrels are made using certified 416R gun-barrel quality steel and are button rifled for match-grade accuracy. KKM Glock barrels are cut with fully supported SAAMI-spec chambers for shooting factory and reloaded ammo.

On the range, the Glock 19 and Ti-RANT 9S ran without any issues. I tested the Ti-RANT 9S with three subsonic loads. The first was ASYM Precision’s 147-grain match FMJ load, which averaged 907 fps. While designed as a match load, the lower velocity makes the ASYM load ideal for use with suppressors. The second ammunition was the HPR 147-grain FMJ load. This load is specifically designed for use with suppressors and averaged 919 fps. The final load was Winchester’s 147-grain T-Series JHP ammo, which is designed for LE and personal defense. The Winchester load averaged 1,017 fps and was the loudest.

Carrying a pistol with a suppressor has been a challenge for many years. Crye Precision, in coordination with the special operations community, has come up with an ingenious solution that is simply called the GunClip. The GunClip is a polymer, U-shaped bracket that clasps the pistol by the top of the slide and the lower edge of the triggerguard. A safety strap wraps around the pistol and is secured via a snap that is released by the middle finger. The GunClip’s unique design allows the pistol to be carried with or without a suppressor. 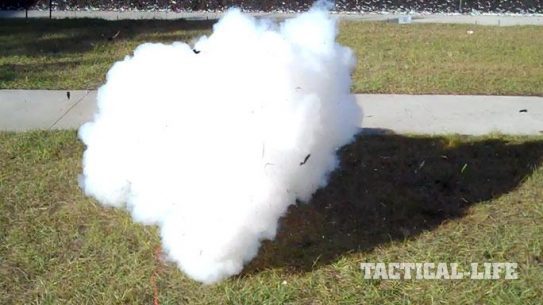 Checking out some of the newest gear and tactics on display at the 32nd...