by Fred Mastison
in Accessories, Gear
0

A gun that runs at speed while generating a soul-healing song of machine-gun-like volumes of fire. You know you want one. There’s something visceral about a weapon firing at a high rate of speed. It’s the same excitement we get around fast cars and other reflections of raw power. The “go-fast” gun is a cruel mistress, though, due to the 4.5 metric tons of paperwork that generally go with full-auto weapons. Mix in a cost of potentially $25,000 or more, and the air gets thin. Of course, that’s if you live someplace where you can get them in the first place. So, many people feel consigned to the monotony of single press, single bang. 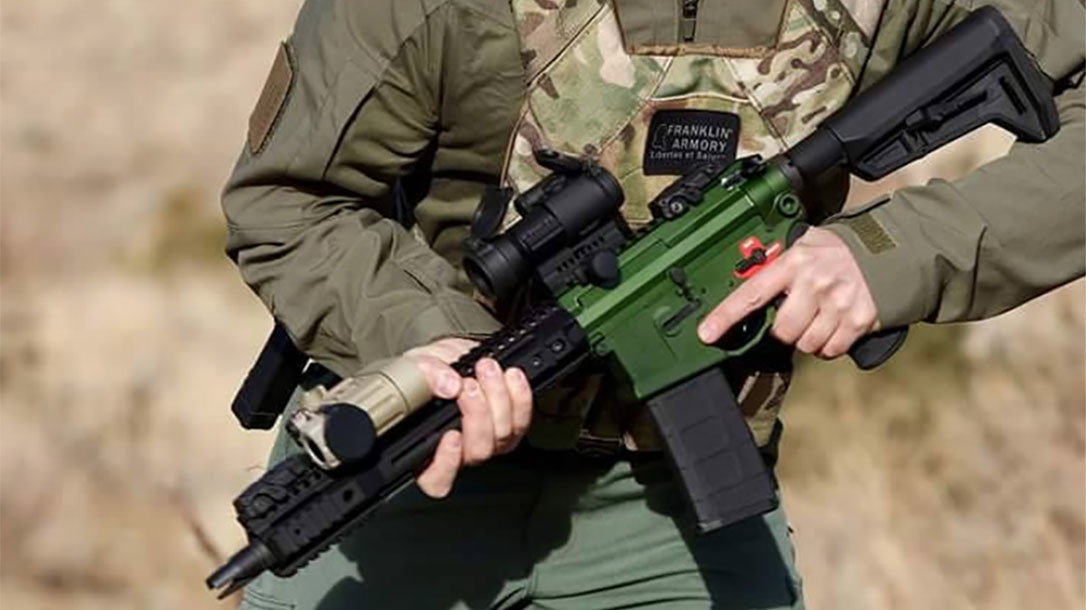 Franklin Armory Reformation: Not a Rifle, Not a Shotgun, But a ‘Firearm’

Well, that’s no longer the case, my friends. Through some engineering wizardry and high-end BATFE navigation, Franklin Armory has released the answer to your prayers: the Binary Firing System Gen III, or simply BFSIII.

The BFSIII is a three-position trigger system that lets you fire your favorite rifle at a high speed. Several models are now available for ARs, AKs, CZ Scorpions, HKs, Bushmaster ACRs and B&T APCs. But the function is the same for each. In the first position, the selector is on “safe,” and the gun will not fire. In the second position, the trigger works like a traditional semi-auto, with one round per pull. But the third position is where all the fun lies. With the selector set in this position, the gun will fire once when you press the trigger, and again when you release it. This provides two shots in a trigger motion that traditionally only releases one. With this option, you can lay down lead at a rate only limited by the speed of your trigger finger.

The applications for the competitive shooting world are obvious. Your ability to run and gun takes on a new meaning, and you’ll crush your old split times. I received the AR-specific BFSII for this review and immediately went to work installing it. But, while it is considered “easy to install,” it’s not like other drop-in trigger units. Self-installation should only be attempted if you know your way around the internals of the AR fire control group. Franklin Armory was kind enough to install a ghost pin in the unit, which helped tremendously.

The entire BFSIII kit includes the trigger, two sets of hammer springs (one set stronger than the other) as well as a three-position fire selector and a stronger buffer spring to reduce the possibility of hammer follow. Rounding it out is a sticker designed to fit over your fire control indicators that’s printed with the three available selector positions. The trigger works in most AR platforms ranging from the .22 LR and 9mm all the way up to .30-caliber weapons without any modifications.

To test the BFSIII, I installed it in a 16-inch-barreled Vltor VWS-XVI Defender carbine, which has been an exceptional gun and would make a great select-fire weapon. As I had mentioned earlier, installation was a bit more involved than just dropping it in and slipping in the pins. I’ve installed more than my fair share of triggers, however, so it went pretty smoothly for me. One item that caught my attention was the detailed function check that Franklin Armory has you go through. Obviously, there are more steps involved than a semi-auto trigger, but the company’s thoroughness was clear. Once installed and checked, I used a trigger pull gauge to measure the BFSIII, which came in right at 4 pounds for each pull. The trigger also felt smooth, and even in the third position, there was a clear reset.

One important function of the trigger is the ability to take it out of the “binary” mode and run it in the traditional semi-auto style again. The scenario is as follows. You’re running the trigger in binary mode, breaking shots at both the pull and release. At some point, you decide to stop firing in that mode, but the trigger is already pulled to the rear. If you simply move the selector back to the second position, the gun will not fire as you release the trigger. This is an intelligent safety and control feature that Franklin Armory incorporated into the design.

Much to the envy of many, I am fortunate to have a few full-auto weapons in my safe and have spent a lot of time using various select-fire weapons. So, naturally, I was very interested to see how the Franklin Armory BFSIII would feel in comparison.

The first few runs at a “fast” string of shots were almost comical. I’ve been hardwired to run a semi-auto trigger in a very specific way, and changing that was harder than I thought. It was by no means a trigger or hardware issue—it was all software. Once I conquered that, my shots started coming faster and faster. It was at this point that I could really see the trigger’s applications for the competitive shooting world. Mastery of this trigger would have enormous benefits for anyone racing through a stage. There was nothing uncomfortable or challenging about the trigger other than just getting accustomed to it. In time, the rate of fire I was experiencing approached that of several full-auto guns on the market.

Once the bottom of the ammo can started showing, it was time to wrap it up and call it a day. In all of the testing, both in semi-auto and binary modes, the trigger functioned well with no mechanical issues whatsoever. I installed the supplied heavier buffer spring but used a regular trigger spring. In fact, it was a very decent trigger to run even in semi-auto mode. And while I can only theorize about the competitive applications of the trigger, I know that it would also work well in some hunting scenarios—especially when it comes to bagging wild hogs. Having the ability to run your gun at a high rate of fire in a target-rich environment can be very rewarding. I plan on taking this setup out to East Texas soon to gather some empirical evidence.

Now, I’ll insert a disclaimer here and say that I’m sure someone out there has a trigger finger fast enough to outrun this design. Every mechanical device has its limits, and while it’s well made, the Franklin Armory BFSIII is not a full-auto conversion.

I’ll also throw in a special note about running guns at high rates of fire. You may be accustomed to running your semi-auto gun fast and even doing a mag dump occasionally. If so, you already know that the byproduct of a high volume of fire is heat—enough heat to easily remove the flesh from your hand should you touch the barrel. Be careful if you start running mag after mag; your handguard may not be up to the challenge.

You might be wondering if the BFSIII is legal. Yes, it is. Franklin Armory went through all the painstaking steps to work with the BATFE on this trigger. There were some design modifications requested by the bureau, and after some time, an approval letter was provided. I’m certain that this is much to the consternation of those who feel such a device makes a semi-auto rifle into a “machine gun,” but let me assure you, it’s not a machine gun, nor does it allow a weapon to be converted into a machine gun. I’ve seen several evolutions of products released to help get shooters higher speeds, and honestly, most have been gimmicks. They’re temperamental with questionable reliability. That isn’t the case with the Franklin Armory BFSIII. It’s a reliable modification to your existing rifle that will allow you to run at much higher speeds.

With specific applications aside, this trigger system is fun. Plain and simple. Let’s be honest: There are few reasons that we’d want this trigger other than to shoot faster and faster. While many will scoff at the idea as a waste of ammo, running the BFSIII at speed is highly entertaining. Does it burn through ammunition? Sure, but we know that going into it. Shooting should be enjoyable, and this certainly fits the bill. This design is a great way for the average gun owner to get close to firing at full-auto rates without going into the realm of the National Firearms Act.