The special operations community has been responsible for the development of many unique weapons systems. During the Vietnam War, the Naval Special Warfare community was tasked with clandestine operations, raids and long-range reconnaissance missions. Small teams would be inserted deep into North Vietnam to provide intelligence and disrupt enemy operations. The SEALs instilled fear into the Viet Cong, who began calling them “the men with green faces.” 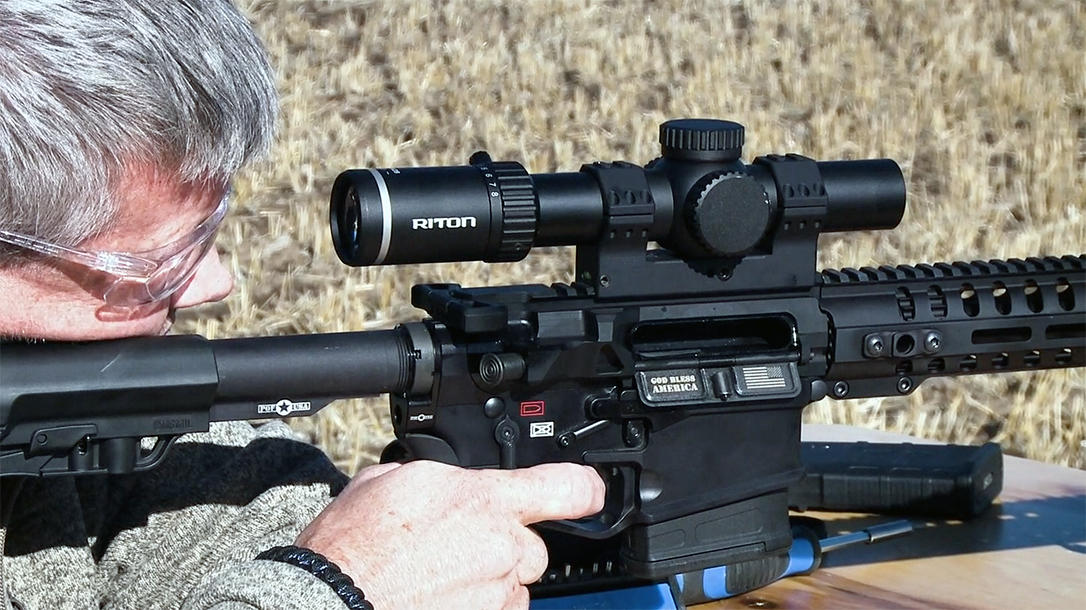 Such operations required SEALs to utilize a number of non-standard specialized weapons, including the Stoner 63A light machine gun, the MAC-10 submachine gun, the XM177E2 carbine and the Carl Gustaf Model 54 (also known as the Swedish K). In the early days, the only suppressed submachine gun available to the teams was the WWII-era M3A1 Grease Gun in .45 ACP, which was cumbersome and weighed in at 11 pounds. The SEALs made extensive use of suppressors on both their carbines and submachine guns. Like other special operations units, the SEALs also used non-standard pistols, including the Browning Hi-Power as well as the Smith & Wesson Models 15 and 39.

According to Kevin Dockery, the author of Special Warfare, Special Weapons, the SEALs tested the Model 39 in the early 1960s. The Model 39 was lighter than the 1911, had a double-action/single-action (DA/SA) operating system and was chambered in the ubiquitous 9mm cartridge. While SEALs didn’t like the magazine-disconnect safety, the Model 39 offered a lightweight package in their favored cartridge.

The nature of the SEALs’ missions often called for suppressed pistols. Again, according to information provided by Kevin Dockery, in 1966 the Naval Surface Ordnance Center began working on the development of a suppressed pistol for the teams. They used a West-German-designed suppressor that, when used with a Walther P38, was very effective. According to Dockery, “In the German design, flexible plastic wipes were held in a small aluminum canister. The canister was installed at the front of the suppressor body. The design allowed for an expansion chamber just in front of the muzzle of the weapon. The suppressor capsule design allowed the suppressor to be serviced by the operator.” The P38 also featured a slide lock to further reduce the noise signature.

After significant research, the Navy settled on the Smith & Wesson Model 39 as a base weapon. The standard gun was modified by adding a threaded barrel. The slide stop side was redesigned to interface with notches cut into the slide to keep the slide closed during firing. Finally, micrometer-adjustable sights from a Model 52 were installed in order to give a clear sight picture above the suppressor. The modified Model 39 was type classified as the Mk 22 Mod 0 and nicknamed the “Hush Puppy.”

The final part of the project was to develop a subsonic load that would be reliable in the Model 39. At the time, there were no heavy 9mm-caliber bullets on the market. The most viable solution was to use current .38/.357 projectiles. The first loads were developed with the assistance of Remington and used 158-grain FMJs. The requirement was for a velocity of 965 fps at 15 feet with a maximum deviation of 25 fps. The ammunition also had to be waterproof. The Navy classified the new load as the Mk 144 Mod 0. Initially produced by Super Vel of Shelbyville, Ind., the load had a distinctive green tip.

The Navy used the Mk 22s into the 1980s, but they were reaching the end of their service life. The stress of continued firing with the slide locked resulted in cracks developing. Eventually, all the pistols were retired from service.

Super Vel was the grandfather of all modern personal-defense ammunition. The original company was formed in 1963 by Lee Jurras, a pioneer in the development of light, copper-jacketed, hollow-point ammunition propelled at very high velocities. Soon, larger manufacturers were producing similar loads, and in 1975 Super Vel went out of business.

In 2015, Cameron Hopkins was operating a small ammunition company based in Las Vegas when he came up with the concept of bringing Super Vel back to the market. After some negotiations with Lee Jurras, he acquired the rights to the Super Vel brand. Hopkins’ first goal was to duplicate the original loads. I obtained some of the first 90-grain 9mm JHPs from the new company. Out of my Nighthawk Custom Carry’s 3.8-inch barrel, the load averaged 1,456 fps.

However, after producing such quality subsonic ammunition, Hopkins really wanted to resurrect the Hush Puppy as a viable pistol for this century. As mentioned earlier, what makes the Hush Puppy unique compared to other suppressed pistols is the slide-lock feature, which eliminates all of the noise created by the slide cycling and the gas escaping from the ejection port.

Hopkins understood that he needed to design a slide-lock device (SLD) that he could adapt to existing pistols. The design needed to be reliable but easily installed with minimal modifications. There is a misconception that the SLD must contain the recoil of the slide and withstand the chamber pressure. However, the SLD simply keeps the slide from unlocking, or coming out of battery. With the barrel in battery, by the locking lugs of the barrel absorbs the pressure.

Unsurprisingly, the first host for the SLD was the Smith & Wesson M&P9 M 2.0. In part, this decision was to pay tribute to the original Model 39. Hopkins worked with Paul Liebenberg to design the M&P9 SLD, which was positioned in the same location as the traditional S&W safety. When placed in the up position, the SLD interfaces with a cutout in the slide, locking it in place. It’s very unobtrusive, robust and easy to use.

After the M&P9, the most logical platform for the Hush Puppy Project was the Glock family. But the Glock required a different design compared to the M&P9. So Hopkins partnered with gunsmith Claudio Salassa from Briley Manufacturing, and the solution was to install the SLD on the left side of the frame. When it’s pushed downward, an internal plunger locks into the existing recess in the frame located to the left of the ejector. The Glock SLD, while not as low profile as the M&P9 version, does not interfere with most holsters or change the manual of arms. The first Glock Hush Puppy was based on the Glock 19 Gen5. Given the popularity of the G19 with special forces across the globe, this was a very logical choice, and the company has also developed SLDs for the G26, G43 and G48.

The SLD modification is only one part of the Hush Puppy equation. The second part would be mission-specific suppressors, and Super Vel has developed two models. The Model 1 is a hybrid design made up of three modules. The first module, which mounts to the pistol, consists of a monocore baffle with three expansion chambers. The second module mounts to the front of the first module and consists of three chambers that hold uniquely designed neoprene wipes. The third module mounts to the second module but holds 12 wipes.

The Hush Puppy Project calls this “tunable technology,” whereby the length, weight and sound signature can be tuned by the user. The most efficient configuration is to use the first and second modules. This allows the user to keep the third module, and its 12 wipes, in reserve.

The Model 2 is a small, wipe-only suppressor designed to balance size and sound reduction. It uses six replaceable wipes that are mounted in a machined core. The sound reduction with both models can be dramatically improved with the addition of an ablative.

It’s important to note that the BATFE has classified wipes as suppressor parts, so they are therefore controlled items. As such, it is unlawful for any non-government user to possess “extra wipes.” But with the Model 1, all the wipes are contained within a usable module, so they are not subject to this restriction. Users are allowed to swap wipes from one module to another. This allows users to send a module back to the Hush Puppy Project to be reconditioned with new wipes.

The final part was the development of suppressor-specific ammunition. Super Vel already produced a 147-grain Hush Puppy subsonic load. However, Hopkins wanted to recreate the original MK 144 Mod 0 load. Thus, the company now offers a 158-grain load that replicates it and will cycle most suppressed pistols with factory recoil springs.

I was fortunate to spend an informal range day with Brad Gilpin, the president of the Hush Puppy Project. I shot the Model 1 in all three configurations along with the little Model 2. The Model 1 proved to be very effective and, subjectively, I would compare it to a Sig Sauer SRD9 or an AAC Ti-RANT 9 when either is used with an ablative. The Model 2 was surprisingly efficient, especially when compared to an AAC Ti-RANT 9S. The wipes were most effective for the first 10 rounds or so. However, we ran 20 rounds through one set of wipes before the sound signature became unacceptable in an urban setting.

The SLD produced a noticeable reduction in the sound signature, both at the shooter’s ear and downrange. When manipulating the SLD on the Glocks, I noticed that the edges on the SLD were sharper than I would have liked. Other than that, the range tests were void of any surprises or loud noises. Without the SLD engaged, the pistols were 100-percent reliable with both the 147- and 158-grain Hush Puppy ammunition.

Without proper metering equipment, suppressor testing is always subjective. However, even when using metering equipment, results can vary due to altitude and environmental conditions. For this reason, the Hush Puppy Project has decided not to publish any specific numbers regarding sound reduction. 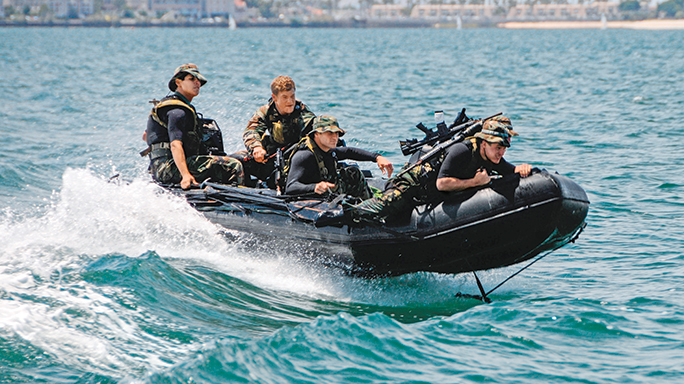 The Hush Puppy pistols, when combined with the Model 1 or Model 2 suppressors, have changed the dynamic of the suppressor industry. The “system” has already attracted the attention of several special operations units, both in the U.S. and internationally. In addition, a number of law enforcement agencies are evaluating the products. For civilians, the rechargeable wipe module solves the need to send the entire suppressor back for reconditioning. The SLD-equipped Hush Puppy pistols also offer improved performance for customers who already own suppressors.

At this time, Lipsey’s exclusively sells the Hush Puppy pistols and suppressors. The Glock 19 Gen5 features a number of upgrades, including a Briley threaded, match-grade barrel, suppressor-height sights and a TangoDown Vickers trigger. The M&P9 M2.0 features upgraded sights and a threaded barrel. Lipsey’s is also stocking the Model 1 and Model 2 suppressors.

For many years, there has been very little innovation in the suppressor market. But Hopkins has changed this with the development of the SLD-equipped pistols, hybrid and modular suppressors, and mission-specific ammunition. I look forward to following the Hush Puppy Project and its special customers. It’s fitting that a special operations project developed in the 1960s has been resurrected, and could end up back in the hands of our SEALs in the near future.