The Gun Control Act (GCA) of 1934 regulated automatic weapons, sound suppressors and destructive devices like hand grenades and mortars. Before that time, anybody with a little money could walk out of their local hardware store with a fully automatic Thompson submachine gun or Browning Automatic Rifle without flashing so much as a driver’s license. But, thanks to the Great Depression, few people had driver’s licenses or much money. 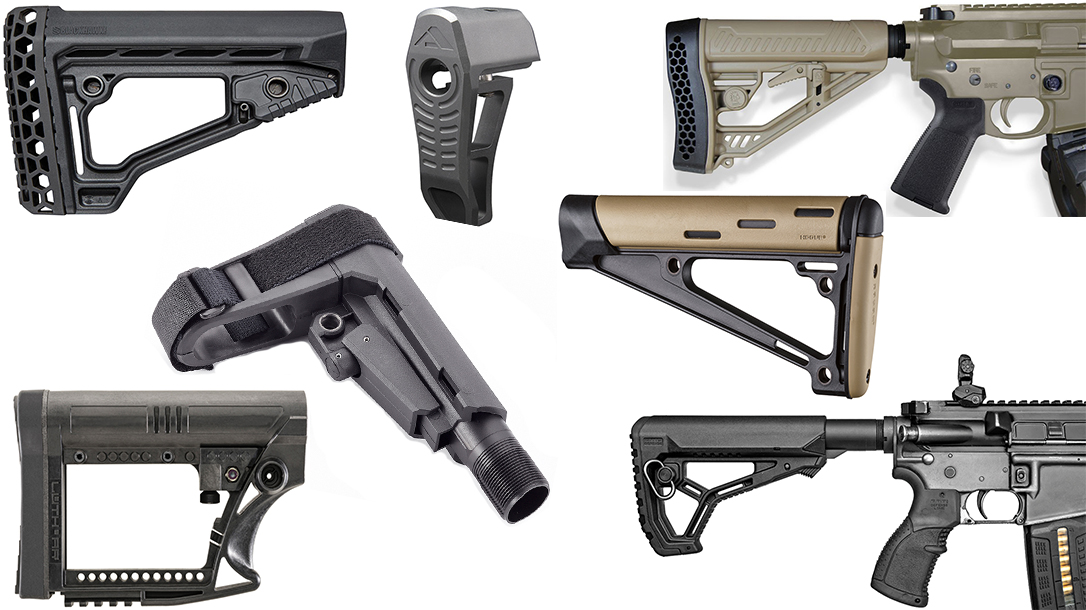 The Skinny on Pistol Stabilizing Braces

The original language of the GCA lumped handguns in with automatic weapons, intending to subject them all to the same $200 transfer tax—a king’s ransom in the day.

The barrel length limitations on rifles and shotguns were codified in the expectation that folks would likely just shorten their long guns if handguns were restricted. Handguns were ultimately negotiated out of the final bill, but no one thought to remove the barrel length restrictions. As a result, we now have to lay down $200 and endure a lot of paperwork to possess a rifle with a barrel shorter than 16 inches.

Then, in 2012, Alex Bosco invented the pistol stabilizing brace (PSB), and the whole planet shifted just a bit. 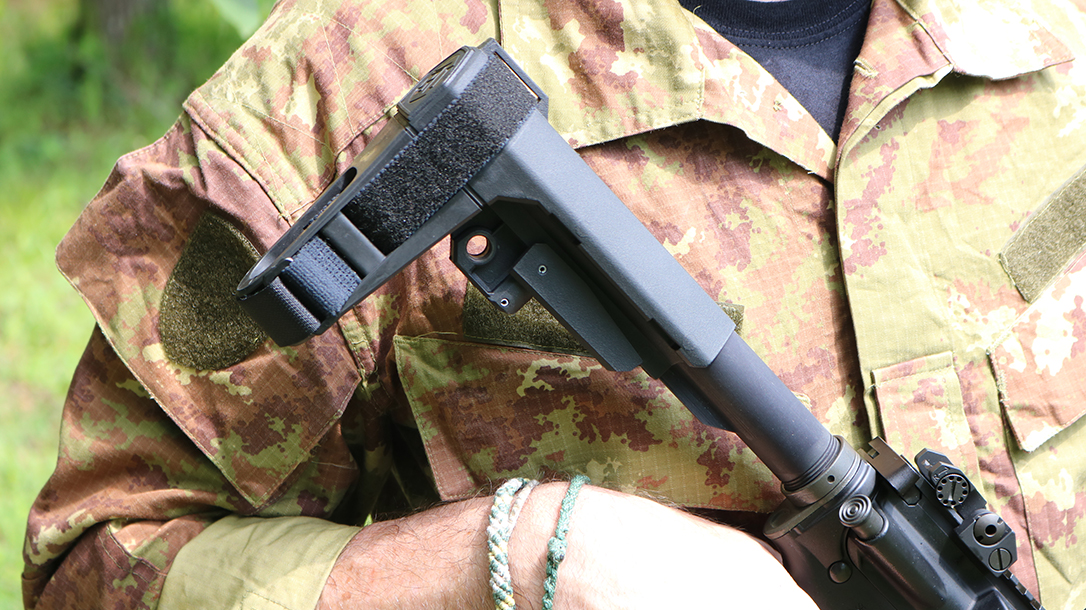 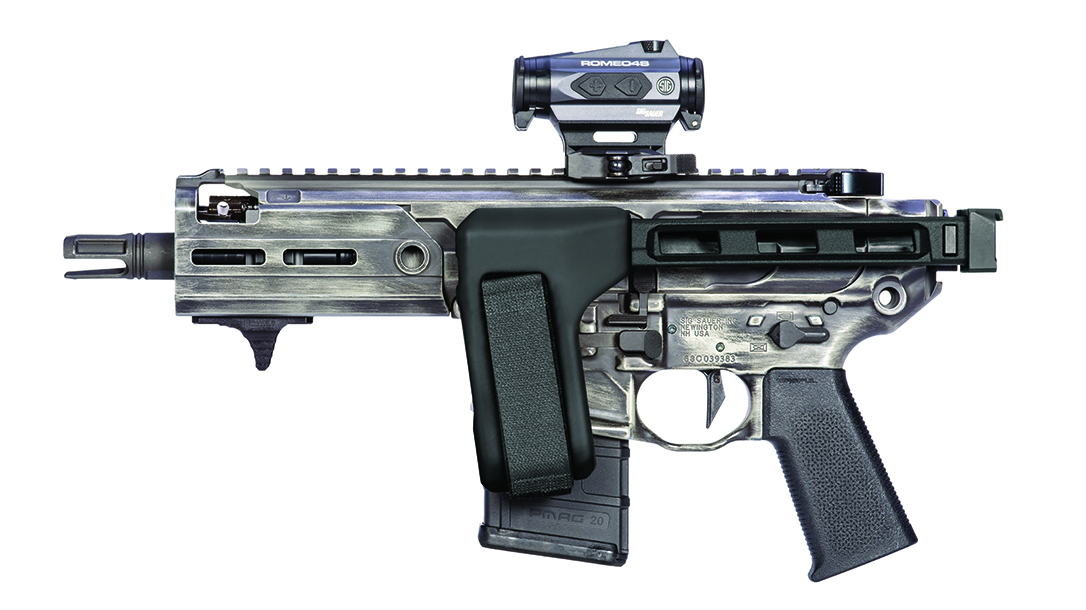 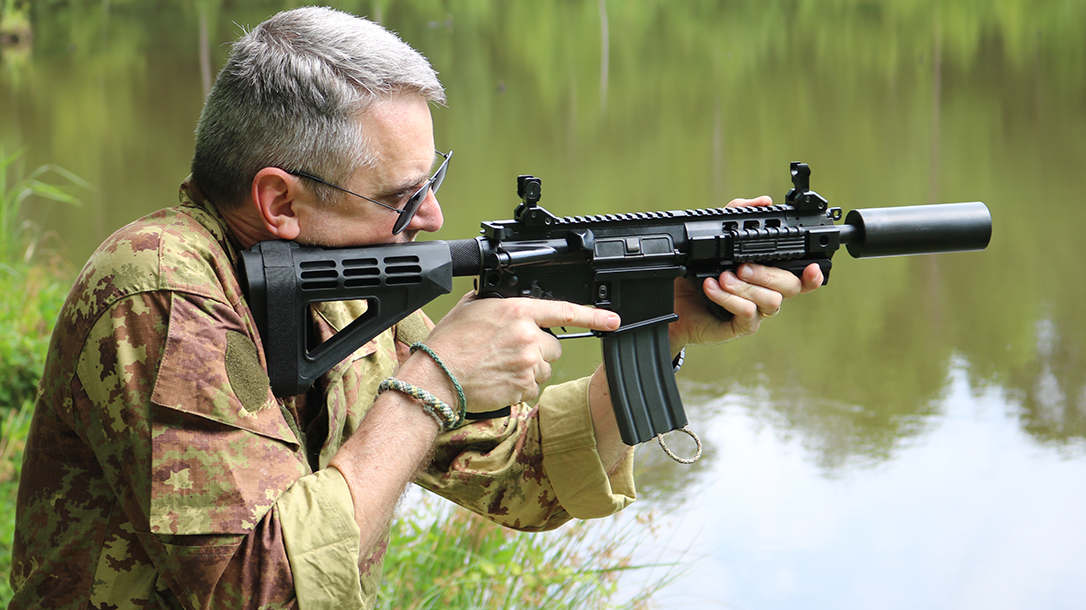 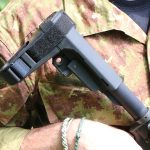 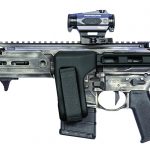 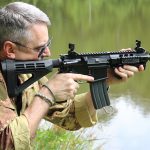 Bosco, a military veteran, invented the PSB to help disabled veterans safely operate large-format pistols like ARs with just one arm. After some back and forth, the BATFE ultimately ruled that the inclusion of a PSB on a handgun did not change the weapon’s original categorization no matter how you fired it. As a result, an entirely new classification of firearms was born.

The original SB15 morphed into the SBM4, then the newest of the bunch, the SBA3. Now the company offers more than 20 different variants for half a dozen popular platforms. The end result? SB Tactical has made those of us who spent the time and money to register a short-barreled rifle (SBR) look pretty darn stupid.

Some of the older PSBs just slip over the buffer tube. The sliding version for the Sig Sauer MPX rides on collapsible struts so you can optimize the device for your particular anatomy. The SBPDW offers this same performance for your AR.

The SBA3 sliding brace could pass for a standard M4 stock in dim light and fits onto a standard mil-spec carbine receiver extension. A new buffer tube is included with the brace should you need it. It also comes with integral sling sockets. Press the release at the front of the unit and the brace slides fore and aft in the manner of a stock. It also sports the standard Velcro attachments as well. In short, the SBA3 is the most exciting tactical gun accessory in a generation. It’s also surprisingly affordable.

SB Tactical gear currently comes in black and Flat Dark Earth, and the quality is superb. The company’s stuff is veteran designed and made in America. As I said, Alex Bosco and SB Tactical gifted American civilian shooters with a whole new genre of guns. Their efforts have literally reshaped the landscape.

Another new product from SB Tactical is the FS1913 side-folding PSB. It has a low-profile, left-side-folding design that is compatible with all handguns with a Picatinny rail interface at the rear of the receiver, including the Sig Sauer MPX and MCX as well as Rock River Arms’ LAR-PDS. Shipping as a complete assembly ready for installation, the FS1913 features an advanced billet-steel hinge that locks firmly in both the folded and extended positions. The pull-through design provides for quick deployment and a solid lockup when fully extended. It’s certainly worth checking out. 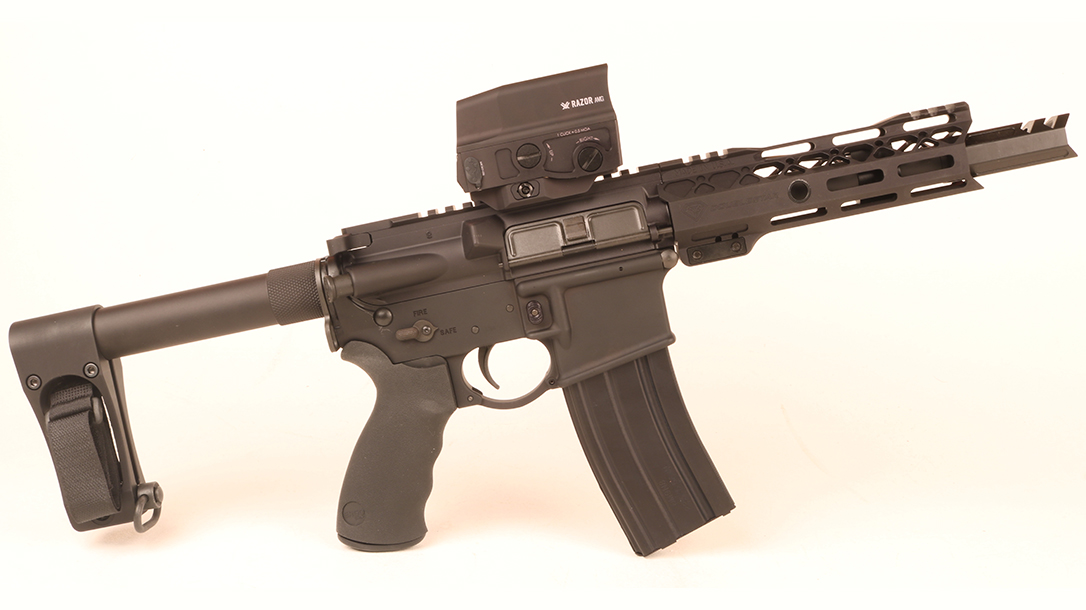 The DoubleStar Strongarm is a deceptively simple yet remarkably effective ddendum to your favorite AR pistol. It’s available as a standalone attachment or as part of the new ARP7 pistol (see the sidebar). Cut from a billet of aluminum, the Strongarm slips over your buffer tube and secures in place with two clamp screws. It also comes with sling mounting sockets and a Velcro arm attachment. In short, it’ll turn any AR pistol into a much more stable hot rod. 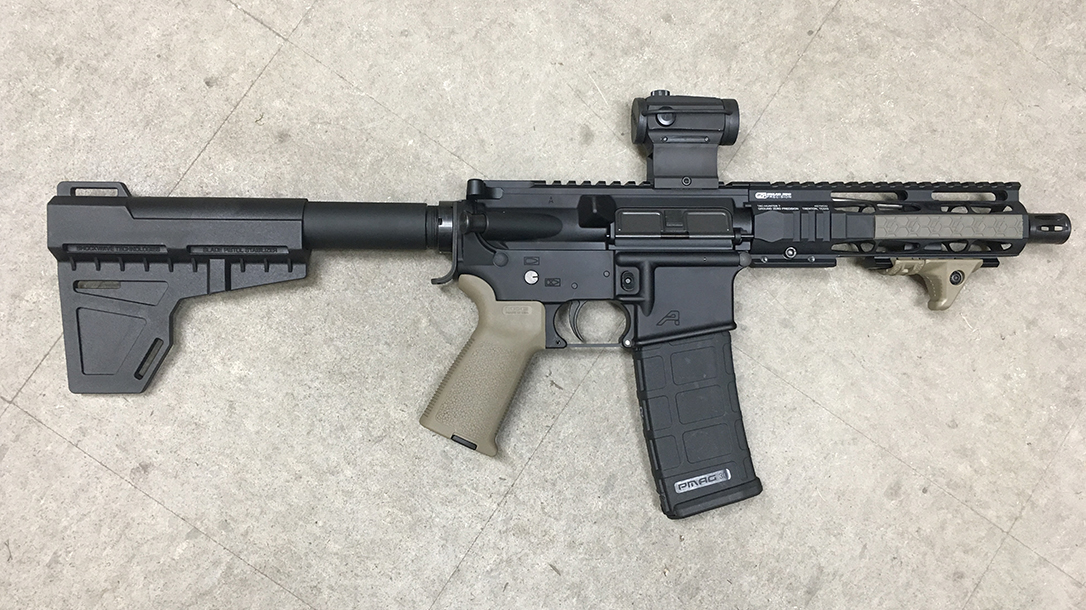 The Shockwave Blade from KAK Industry is a minimalist addition to your existing AR pistol. The Blade will only set you back about $40 and slides in place on buffer tubes up to 1.25 inches in diameter. Installation is just stupid easy. Slip the thing in place, tighten a single setscrew and hit the range.

The Shockwave Blade can be adjusted for various lengths and adds little to nothing to the gun’s overall weight. It comes in scads of colors, including red, blue and Flat Dark Earth, and reliably makes a good AR pistol great at a very reasonable cost. The Shockwave Blade can rest against your arm or cheek to add additional stability to any stubby gun with a buffer tube.

The HERA CQR is a substantial departure from the PSB variants we’ve discussed thus far. The CQR is designed for those unfortunate areas in the United States that demand thumbhole stocks for legality. But it’s also cool enough to appeal to the country’s non-enslaved shooters as well. Unlike the previous American-made devices, the CQR hails from Germany.

The CQR consists of an angular thumbhole buttstock along with a matching contoured foregrip. The foregrip attaches easily enough, though the buttstock requires a ball-end Allen wrench for installation. The end result has plenty of sling mounting points and looks just super cool. The CQR gives your favorite AR a definitive FN P90 flavor.

The downside to the CQR is that it is still a buttstock. This means it must be installed on a rifle—not a pistol—and if you want a short barrel, you’ll need a registered SBR lower for legality. The whole setup runs fine on an AR with a standard barrel length, but it just looks cooler with a shorter barrel. I have no excuse. I am just as much a sucker for eye candy as a typical 14-year-old.

The HERA CQR doesn’t offer the radical versatility of the PSB options, but it does look undeniably awesome. It is also imminently functional. I mounted mine up on an SBR lower with a 9mm Glock magazine conversion from Stern Defense and suddenly became the coolest guy at the range. If I had enough ammo, I could shoot that thing until I starved to death.

Practically speaking, the 5.56mm NATO is an effective round because of its high velocity. Chop your barrel back far enough, however, and the bullet slows down precipitously. Get too carried away and you have built a very expensive .22-caliber rifle. I am familiar with physics and physiology. But these guns are fire-breathing dragons on the range. And in addition to being really fun, they are preternaturally stowable. I suspect these AR pistols would reliably do the deed on a home invader as well at appropriate ranges.

The 9mm Stern Defense rig I mentioned earlier is fairly sedate. Other short-barreled 5.56mm guns are veritable monsters. The recoil is mild, but the muzzle blast will loosen your fillings. Additionally, the muzzle flash is visible from the moon. No kidding—combining earplugs and muffs is a good idea if you plan to run these guns more than just a little bit.

The Stoner-inspired ergonomics of the AR set the standard for everything else. In another quirky aspect of arcane American firearms law, you can put an angled foregrip on a pistol without arousing the ire of federal authorities. However, make that a vertical foregrip and you’ve just committed a felony. I don’t understand it, either.

Given all the unbridled chaos taking place right at the muzzle, a proper angled foregrip is a good idea to keep your soft digits away from the scary bits. Magpul makes a great one appropriately called the AFG (Angled Foregrip). HERA also makes a nifty articulated, multi-position foregrip that adjusts as you want it.

Despite all the blast, running these little guns really is fun. They look neat and swing better than a bulky black rifle or a conventional pistol-caliber handgun. Adding a brace will enhance your control without slowing you down. At typical handgun ranges, I can keep all of my groups within a soup can lid. However, I can only imagine how horrible it might be to touch one of these monsters off for real inside a closet without earplugs.

With some proper tactical glass up top, these guns do run faster in tight spaces than a conventional black rifle. The Vortex Razor AMG UH-1, for example, is a red-dot sight that complements these stubby little weapons splendidly. The quick magazine changes set the standard by which all other guns are judged, and the muzzle fireworks in dim light will make you want to go back to church. But at the end of the day, why would any serious gun guy want one of these novel little freaks?

You get into a short-barreled, brace-equipped AR pistol because this is America and you can. We justifiably gripe about steady infringements on our favorite amendment to the U.S. Constitution, but there really is no place else in the world that offers the unique combination of personal liberty and firearms rights that we find right here in most of America. There are places in the world where weapons are much more readily available, but you wouldn’t want to raise your kids there.

The various arcane rules shift like the tides, but folks like SB Tactical, DoubleStar, KAK Industry and HERA are out there churning out “cool guy” stuff to keep our addictions reliably fed. If your gun safe is well stocked but you don’t have a tricked-out brace-equipped pistol, you might want to take the plunge.

In addition to being an inimitable home-defense or truck gun, these tidy little beasts embody just a little bit of the stuff that makes us Americans. These guns are loud, mean and ornery, just like the country that birthed them, and when the dust settles, that is enough impetus for me to want one. 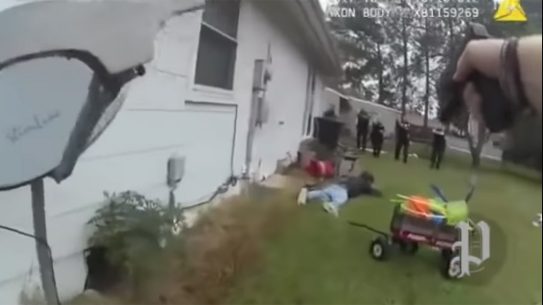