by Kyle Lynch
in Accessories, Gear
0

Reducing your visual signature is an important part of stealth operations and activities. This is important day or night, regardless of the technical capabilities of your opponent or the eyesight of your prey. Understanding the different camo patterns ensures tactical and sporting needs are met. 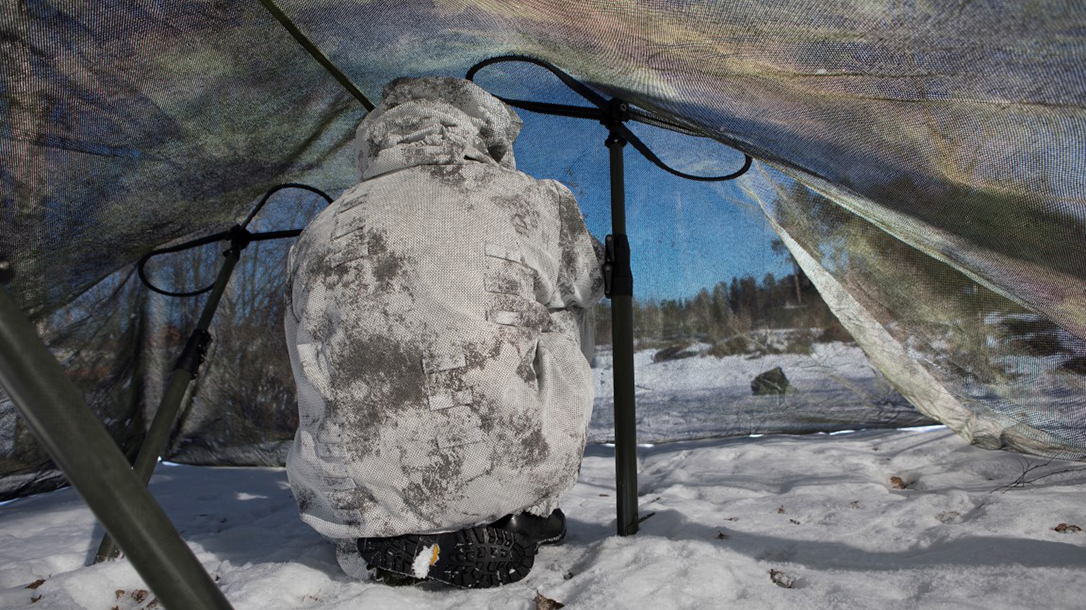 Visual signature might include several factors, such as shape, color, texture, pattern, reflection, outline or the orientation of each. Weapons present visual signatures with similar factors, plus the flash and smoke from firing and dust or debris blasted from near the muzzle as the gun is fired. An adversary can use each as a target indicator, or your prey might recognize them as a threat.

The human outline is distinct in the animal world. A two-legged predator in a landscape populated by four-legged creatures is recognized as an immediate threat to all but apex four-legged predators. Using camouflage to break up the human outline and blend in with the terrain and vegetation is a technique as old as the concept of predator and prey.

From covering ourselves with animal hides and rubbing soot or dirt on exposed skin, we’ve elevated personal camouflage to an assortment of clothing, gear, paint, tape, webbing, netting and every other imaginable material available in dozens of camo patterns. Also, you can instantly apply camo face paint in multiple colors and remove it almost as quickly. This multitude of options means you can select camo tailored precisely to the environment of your next mission and the conditions at the moment you embark. By studying the natural world and reviewing battlefield successes and failures, we’ve learned to become almost invisible.

The past few decades of camouflage development and refinement have brought some challenges, too. The increasing prevalence of image-intensifying NODs has forced militaries to understand the requirements of camouflage in daylight as well as low light. Military and sporting camo patterns have similarities but are usually designed with different constraints and requirements.

General-issue military camo patterns must be effective in many environments and conditions while presenting a professional appearance and enabling the identification of friendlies. But manufacturers can tailor sporting camo patterns to terrain, vegetation and the season of their intended use. This often leads to sporting camo patterns that look like components of the environments in which they’re designed to work. Camo patterns marketed to Eastern hunters often feature the twigs, leaves, bark and branches of the woodland habitat of whitetail deer. Camo marketed to Western hunters might include images or representations of rocks, sagebrush and coniferous trees of the elk woods or antelope prairies.

Camouflage is most frequently designed with one or more of three goals: blend, break up or disrupt. Blending patterns mimic the predominant colors or patterns of the environment where they’ll be used most. A classic example is one of my all-time favorite patterns, the original Mossy Oak Bottomland. It blends with the colors and textures of the hardwood forests so common throughout the southeastern United States during the dormant season. Viewed from more than arm’s length, Bottomland takes on an almost monotone look, however. It has two shades of brown, but there’s no real attempt to use contrasting elements to break up the human shape.

Bottomland blends with a specific environment during a specific season, and it does so well. Realtree Max-1 is another sporting pattern that attempts to blend in but adds contrasting elements to help break up the human outline. Long marketed as the Western hunter’s camo pattern, Max-1 has somewhat fallen out fashion but remains extremely effective. With multiple mid-tone brown colors overlaid with contrasting depictions of sagebrush and evergreen boughs, Max-1 does a good job of blending, with accurate colorization and an appropriate amount of contrast.

Camo patterns designed to break up the human outline usually have large contrasting blocks of color or patterns. A recent example is the Cipher pattern from First Lite. Cipher uses large, irregular and contrasting areas of colors and shapes to prevent the wearer from appearing like a large monotone blob. This is the downfall of many blend patterns like Bottomland. Cipher works in many environments but uses primarily brown tones to work well in arid regions or wooded areas during the dormant seasons. Because Cipher is a breakup-style pattern, the colors aren’t as important as they would be if the pattern were intended to blend.

All Season All Terrain camo, is an older pattern that might not be as fashionable as it once was. Still, it’s effective as ever. ASAT breaks up the human outline and disrupt the ability of game to distinguish individual parts of the wearer. I’ve often explained my affection for ASAT like this: Other camo patterns attempt to look like something, but ASAT attempts to look like the nothing between somethings. Rather than looking like a tree, bush or rock, ASAT attempts to become part of the negative space between. It makes parts of the human form confusing to an animal’s eye. I admit, ASAT is not pretty and doesn’t use high-tech printing techniques to create shadowing. It also lacks photorealistic elements, but it flat-out works.

The standard in modern military and uniform camouflage is the MultiCam pattern from Crye Precision. Although the U.S. Army adopted a slightly older and demonstrably less effective version of MultiCam known as Scorpion (the Army would say it’s a separate pattern) for political and legal reasons, MultiCam is the foundation of the free world’s modern camouflage scheme. Also, Western militaries have adopted MultiCam outright or worked with Crye Precision to create their own slightly unique proprietary variant. Further, Soldiersystems.net covered those domestic and international issues extensively if you’re interested in the controversies and facts.

MultiCam is a highly versatile and effective blending pattern that excels in most temperate environments. It is also effective in some semi-arid and arid regions. It’s as effective at night as it is during daylight. MultiCam features mostly mid-tone brown and green colors with light and dark contrasting elements that reduce the “blob” effect. As a result of camo testing throughout the globe and military interest, MultiCam is offered as a family of patterns. Also, specific variants perform in arid, tropical and arctic regions. A black variant creates a distinct and professional appearance for law-enforcement tactical teams.

With more choices than ever, it’s easy to find a tactical or sporting camo pattern that works for you. Whether you choose a blending, disruptive or breakup pattern, your concealment will be enhanced tremendously.