0
SHARES
49
VIEWS
Share on FacebookShare on Twitter
The Adcor BEAR was designed for the purpose of upgrading the basic infantry weapon. The BEAR—shown here with a SureFire M900V vertical foregrip and Trijicon ACOG—surpasses a conventional operating system by utilizing a unique gas/piston hybrid that builds on the strengths of each system.

At first glance the Adcor Defense Brown Enhanced Automatic Rifle (BEAR) look likes a standard AR-15, but if by second glance its enhanced features have not jumped out at you, then you need your eyes examined. Piston systems are fine and good, but the BEAR is designed to compete in a future military rifle improvement program, the BEAR is not a conventional piston system—it is a hybrid.

The BEAR system takes the best of a variety of the other systems and builds on their strengths. It a modified AR-15 bolt carrier, with the most noticeable difference being a long rod attached in place of gas key. The appearance of the BEAR is reminiscent of the AK-47 bolt group. The end of the bolt rod fits into a short tappet near the muzzle of the rifle that receives the force of the exhaust gases. The tappet is propelled back sharply for a very short distance, and this movement pushes the bolt rod backwards allowing the bolt to unlock and recoil under the kinetic energy of the discharging cartridge. All of the hot exhaust gases stay in the front of the system and out of the receiver, which is the big benefit of a piston system. The BEAR overcomes the adverse mechanical influence of the piston slap and subsequent carrier tilt by using the length of the bolt rod as a mechanical guide, thus keeping the bolt from from wobbling around inside the receiver. At its core, the system is a “short-stroke” piston rather than the short-stroke system more commonly seen in AR piston variants today.

The bolt carrier and key are is made by Adcor. The BEAR design requires two pieces—carrier and piston key—as it would be impractical to manufacture the bolt carrier and long piston rod as single piece. With more common short-stroke piston systems, the bolt carrier and key are one-piece. This design is touted to be as superior to the Mil-Spec carrier, where the key is screwed onto the carrier from the top and then the screws are Loctite and pinned to prevent them from backing out. In the world of do-it-yourself kit-built ARs, there are concerns that if the bolt carrier is of inferior production the screws can back out, which may cause the weapon to jam very soundly. This is generally not an issue with factory-built rifles like the BEAR, where assembly jigs and precision tools are used. The dustcover is slightly modified to function with the BEAR wiper system, which is fitted with springs that push the wiper outwards and fill the ejection port, effectively sealing it to significantly reduce the infiltration of debris.

The gas system can be adjusted by turning the regulator valve located in the forward part of the gas block. The gas regulator value is available with either two or four positions of adjustment. The four-position valve is more military oriented. It can be opened or closed down for suppressors or running a very dirty weapon. The in-between positions are for best function depending on ammunition type. 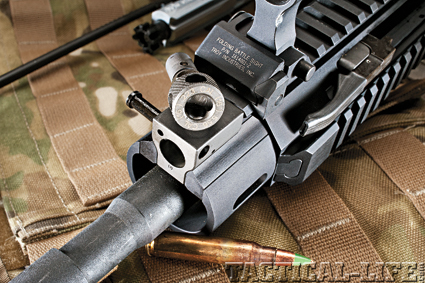 The gas system can be adjusted by turning the regulator valve located in the forward part of the gas block, which is available with either two or four positions of adjustment.

Operating Systems
There are many flavors of operating systems for the modern rifle. The original AR-15 design is the direct-impingement system, where gas is vented from the barrel via a tube and directed against the key to force the bolt rearward. Direct impingement is simple and very lightweight.

Its principal disadvantages are that the gases and the associated debris are vented inside the upper and lower receiver, as the heat of the gases reduces the life of some metal components and critical lubricant is dried out.

With the short-stroke piston system, a piston rod is a separate component. When gases are exhausted from the barrel they strike the face of the piston rod. The rod is pushed violently towards the bolt. The striking of the bolt carrier by the piston rod starts the bolt backwards. The advantages of the short stroke systems are that it is lightweight and it is cleaner as gases do not enter the receiver. However, a potential disadvantage is related to the mechanical forces acting on the bolt carrier. The movement of the bolt carrier can “tilt” and may be the cause for premature wear and damage to the bolt and upper receiver.

The AK-47 is a familiar example of the long-stroke system. The gas piston is attached to the bolt carrier and extends far in front of the bolt and the face of the extended piston receives the blast of gas directly. It is a very simple and rugged system; however it is also heavier, both in terms of weight and as the mass relates to momentum and the functional effects on the shooting characteristics of the rifle.

Cleanliness is next to godliness and simpler is better, but weight is critical in two ways. The more simplistic explanation is that heavy components make a heavier weapon. More complex are the heavy components when they are in motion and how they affect the operator’s ability to fire the weapon accurately. Well known to shooters is that recoil affects the shooter and the movement of the mass affects the weapon, which affects both target reacquisition and subsequent rapid follow-up shots.

Close inspection of the dustcover reveals that the detent is located at the rear of the narrow flap, unlike the Mil-Spec flap with the catch in the center of the long side. It is there because of Adcor’s unique port dust wiper, made of engineered polymer and attached to the side of the Adcor bolt. The wiper is fitted with springs that push the wiper outwards and fill the ejection port, effectively sealing it. When the bolt moves, the wiper is slightly depressed, and during the bolt’s cycle the wiper remains in contact with the interior surface of the upper.

This keeps dust and sand from infiltrating into the upper receiver around the bolt. Adcor’s wiper is intended to significantly reduce the infiltration of debris. 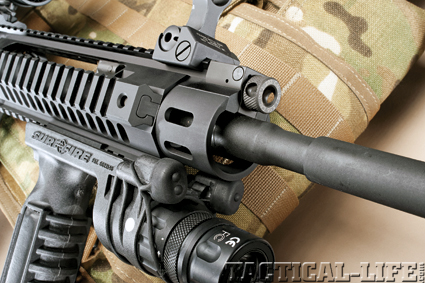 The weapon’s versatility is further evident in the fact that the Adcor charging handle can easily be swapped out and placed on the opposite side for ambidextrous capability.

Forward Charging Handle
At the rear of the upper receiver is the standard charging handle. However, Adcor’s extended bolt rod has another trick up its sleeve—another charging handle and forward assist handle. If you are familiar with the Heckler & Koch series of rifles (G-3/HK91, HK93, HK53, MP-5) then you are aware that their charging handles are located alongside the barrel forward of the receiver. As the bolt piston rod is attached to the bolt carrier, Adcor took advantage of this and attached a second charging handle to the rod.

Adcor does not stop there, the charging handle can easily be swapped out and placed on the opposite side. Adcor leaves the traditional AR upper receiver’s charging handle so that shooters can easily operate whatever system with which they are comfortable.

Upon close observation of the barrel, I noted that there is a flat spot milled across the top of barrel just in front of the barrel extension. This flat is a clearance cut to permit the forward charging handle to clear the barrel. Although this may seem unnecessary, the result of this cut is that the BEAR upper rail height remains the same as Mil-Spec M4s. The BEAR barrel is free-floating, and the BEAR uses a Green Mountain button broached barrel of the military version. Again keeping to military standards, the lower assembly is all Mil-Spec.

Optics
It was a rare windless day, temperature was around 32 degrees and warming with the rising sun. With a system as advanced as the BEAR, I selected a Premier Optics 1-8x V8 Tactical scope. The Premier is a big scope with a 34mm tube and made of quality components.

Among the Premier’s many fascinating features is the illuminated reticle. From 1-3 power, the illumination is a red dot. Above 3x, the reticle changes automatically to a Mil-Dot style pattern. The windage, elevation and illumination knobs all had locking features. The turrets cannot be turned unless the outer knob is pulled outwards. This simple feature prevents inadvertently turning the knobs and changing the scope settings. To set the zero on the windage and elevation turrets, there is a small lever in the center. Lifting it, the knob can be freely turned. Flipping the knob back locks the knob and sets the zero.

Although 30mm scope tubes are very popular, the 34mm scope is likely to become the leader in scope technology in my opinion. But until then, scope rings can be hard to come by—except of course for LaRue Tactical’s line of accessories. Their model SPR-S one-piece, quick-detachable scope mount is not only available in 30mm, but can quickly be changed to 34mm. Instead of a horizontal split common to scope rings, the LaRue uses a vertical split that affixes to a mounting stud rising from the rail assembly. The SPR-S uses two cam levers to attach and detach from the Picatinny rail, one of which also includes an open/close lock. This is a very solid system.

Range Time
I quickly fired the BEAR to get on paper, followed by a few quick adjustments and then I began shooting for groups. I had on hand Black Hills 55-grain FMJ, Wolf 62-grain SP, Federal American Eagle 55-grain FMJ and Winchester USA 55-grain FMJ. The Wolf, Federal and Winchester shot consistently in the 1.4 MOA range. Interestingly, during the range time several different groups were almost identical spreads. I held two targets up to the light and the further of the two holes lined up perfectly—now that is consistency. The best group of the bunch was the Black Hills at 0.8 MOA.

The BEAR upper offers everything the military could want. A simple change to existing rifles and the military would be well served with this enhanced rifle. The same upper or even complete rifle is also available to the civilian shooter, complete with the same level of features and convenience. If you as a shooter have grown beyond the standard AR, then the Adcor BEAR may be your best choice.