Less-lethal technology is an evolving and growing field. Here’s a look at recently introduced products as they may already be issued to many police departments, prison armories
or deployed military units.

Mace Security International
Available from Mace is the Takedown line of OC/CS combination sprays containing 5.5 percent OC, 10 percent pepper, pepper foam and pepper gel products. You would not want to get hit with this sticky, foam-like spray or the new pepper gel. Mace also offers Takedown Relief, which is an herbal decontaminate spray that helps relieve the effects of OC on the skin.

This spray is available in a 7-gram pen, 11.3-gram key ring units, and up to a massive 300-gram pistol grip mounted unit. In between are 1.3-, 2.5- and 3.5-ounce units suitable for plainclothes and uniformed use. They even have trainer models available for the pen, 1.3- and 2.5-ounce units.

Enforcement Technology Group
Enforcement Technology Group’s Live Shotgun Stream brand products are 5.5 percent OC products as well as combination sprays of OC with CS. With “shotgun” steams of spray that will hit out to 15 feet. ETGI only uses a million Scoville Heat Unit spray to reduce decontamination time. Their Hydro-Shot spray was introduced as a safe spray liquid for training and confrontation simulation training.

Defense Technologies
Defense Technologies offers an excellent 360-degree spray line in its chemical irritant category. The X2 spray, which has two times the capsaicin concentration, allows the spray to function regardless of can orientation.

Their Model 25 Reloadable Flashbang is a device that does not utilize a black powder charge for its blinding flash and bang. The device will propel a type of fuel out of the grenade body, which will then be ignited by the fuse.

Kimber
Kimber’s new class of less-lethal OC has a greater effective range than conventional OC sprays. The JPX Jet Protector intended for carry on a police officer’s duty belt, has a pharmaceutical grade OC, which is a sticky gel that stays together until it reaches the limits of the effective range.  When the glob of OC strikes the target, it adheres almost like glue and is difficult to remove.  The velocity of the OC is such that it will penetrate facemasks and actually “wrap” around glasses.  Unlike common OC that is effective for only 15 to 20 minutes, the Kimber gel incapacitates the target for up to 45 minutes. The JPX has effective ranges that far exceed any other OC less-lethal and since it is propelled by a pyrotechnic charge, it doesn’t lose effectiveness over time.

The JPX OC charge has a velocity of 270 mph and has an effective range of 23 feet. The JPX has a two-shot capability, and can be reloaded.  “Live” OC and inert marking dye units are available, and in either orange or black frames.

The PepperBlaster propels its OC solution via pyrotechnic charges to an effective range of 13 feet. The charge has a velocity of about 90 mph, so it travels fast enough that it’s almost impossible for the bad guy to avoid. The PepperBlaster is fired by a conventional trigger that has a safety, which is disabled by simply placing one’s finger on the trigger that fires two shots to deter the bad guy.

Combined Tactical Systems
Combined Tactical Systems offers 7290 and 7290M FNDD flash grenades, which are disposable and cost as little as most reloadable cartridges. The 7290M weigh 15 ounces and produce the 175 decibels of the full-size 7290 with 4 to 5 million candela of light. The full size model 7290 weighs 30 percent more, produces more light, coming in at 6 to 7 million candela.

SABRE
The SABRE Red grenades have two sizes of grenades that carry a payload of 10 percent OC that delivers 1.33 percent “Major Capsaicinoids.” They resemble an aerosol can with a flat nozzle on it, like the bug fogger that is designed to disperse crowds of pests. Some uses may include clearing unruly or aggressive crowds or dropping them into rooms or cells with armed or combative subjects.

The 2-ounce model empties out in six seconds and covers about 10,000 cubic feet of space within 60 seconds of activation. The larger 5-ounce unit takes 14 seconds to disperse its payload and covers 22,000 cubic feet in the same time frame.

X-Caliber Tactical
X-Caliber Tactical has a new high-end airsoft gun called the Strafer Mark 4 Model 1. Intended as a pain compliance device particularly suited to civil or prison riots, it is chambered for 6mm plastic round balls and fires in the fully automatic mode at 175 rounds per second. That works out to an unbelievable 10500 RPM. It also has an adjustable velocity from 250 to 625 feet per second.

The internal hopper on the MK4 Mod 1 holds 7200 rounds. The MK 4 is powered by CO2 or high-pressure air that is carried in an external tank slung on the back or stored in a pouch on a tactical vest. The Strafer MK 4 Mod 1 is solidly constructed of T6061 anodized aircraft aluminum with three moving parts: the trigger, safety and an internal air valve.

FNH USA
FNH has added a less-lethal handgun in their line up this year. Like their FN303, the FN Less Lethal Pistol (LLP) uses a .68 caliber projectile and carries seven of them in a detachable magazine with a CO2 cartridge. Effective range is 20 meters and is a semi-auto design. Construction consists of a high-impact urethane lower receiver mated to an aluminum barrel and upper receiver with stainless steel operating system. Featuring a lower accessory rail molded into the frame in much the same way as many modern tactical pistols.

Sage International
The Sage Deuce over/under 37mm or 40mm launcher system is perfect for crowd control or barricaded crisis situations. This gun has a side-folding, 5-position adjustable stock. The first trigger pull fires the top barrel with the second pull firing the lower barrel as soon as you press the trigger. It uses K041 with three different energy level baton rounds: Standard, Mid-Range and Less Energy. Sage’s munitions can be reloaded locally to reduce cost.

Taser
Taser revolutionized the field of less-lethal weapons with their M26 and T26. Their newly announced Shockwave system uses Remote Area Denial (TRAD) technology and is essentially a less-lethal land mine that resembles the classic Claymore. The Shockwave is remotely detonated, has a standoff distance of around 100 meters and its multiple Taser cartridges are positioned in an arc so that they can cover a wider area and engage multiple targets. The Shockwave also can be mounted on vehicles, which would be handy when trying to move or disperse crowds, or ensure security around a command post.

Taser also has X26 units complete with Tasercam along with their civilian C2 models. The X12 LLS Less Lethal Mossberg Shotgun is engineered to fire the Taser XREP (Extended Range Electronic Projectile) round.

ALS Technologies
ALS Technologies has standard disposable, reloadable and distraction devices that can be fired from 12 gauge shotguns, which are set to go off either at the muzzle or in aerial burst rounds that go off from 75 to 200 feet. The Magnum Stun devices, Ultra Stun,

Multi Ultra FNDDs (flash and noise diversionary device), and the T-460 Tactical Blast Strip can be slid under a suspect’s door prior to and after the entryway is breached, to distract the suspect.

The new ALS09NR, a “Single Use, Non-Reloadable Diversionary Device,” uses a steel body and the proven M201A1 mil- spec igniter along with a flash powder mix that produces a 169 to 174 decibel report and a disorientating flash. The body is made from steel and has a watertight explosive chamber. The diversionary device is approximately 4.5 inches tall, 1.75 inches in diameter and weighs 9.6 ounces.

It fits in most pouches including a 40mm grenade pouch. Despite its compact size, its performance is said to rival that of full-sized devices. The ALS09NR works off of a 1- to 1.5-second delay and is designed to disorient targets for 1 to 3 seconds. 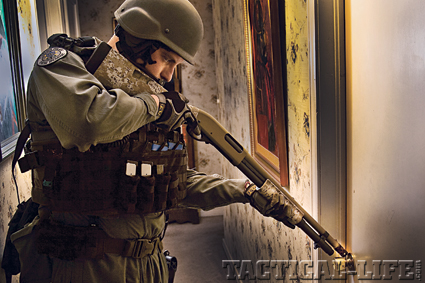 Less-lethal technology is an evolving and growing field. Here’s a look at recently introduced…