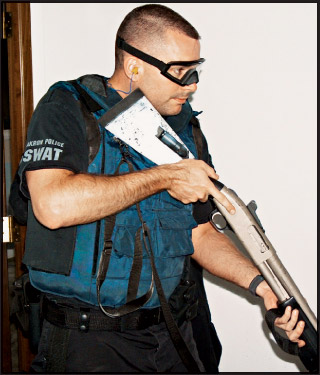 Providing options—that’s what law enforcement and military special operations are all about, giving tactical commanders options other than the usual. As has been said, “When all you have is a hammer, everything looks like a nail.” When all you have is a firearm, your tactical options are severely limited. What options are available when you have a young suicidal female with a knife held against her own wrist? What if she is out in the open in a school parking lot and you can’t get closer than 50 feet?

Flashback to 1980 and the movie, The Hunter, with Steve McQueen as bounty hunter Ralph ‘Papa’ Thorson, in pursuit of a very large bail jumper. Thorson finds his man, only to be tossed about like a rag doll. When it looks like McQueen’s character is sure to be pummeled to death, he reaches for a device that he had hidden earlier—a “bean bag” gun—that, with one shot, puts the suspect down for the count.

Although the effects of the impact are greatly exaggerated, the device existed at that time and the development of kinetic energy munitions (KEM), or “impact” rounds, has continued since then. Ever since someone had the idea to fire wooden “knee knockers” at rioters, these munitions have improved in reliability and performance. With modern police trainers and researchers such as Sid Heal from the Los Angeles Sheriff’s Office and Steve James from the Springfield, Missouri, Police Department focusing on the problem, injuries of police personnel and criminal suspects has been reduced as have lawsuits against agencies based on improper use of KEM rounds. Modern law enforcement agencies have available a veritable potpourri of KEM munitions that are classified in two categories: non-flexible munitions, which are rigid and deliver much of their energy to the target; and flexible munitions, which conform to the target and deliver comparatively less energy.

Non-Flexible and Flexible Munitions
Non-flexible munitions include the wooden baton rounds that are still available today as well as hard-rubber baton rounds. The Defense Technology Model 1176 is an example of a wooden baton round. The 8-inch casing contains five .77 ounce wooden projectiles that have a velocity of 280 fps. These wooden projectiles have a recommended maximum range of 50 yards and are designed to be skip fired—fired so as to ricochet off the ground. Bad things happen to rioters and suspects when these projectiles are fired directly at people. Even when correctly skip fired, these pieces of wood can bounce off the deck at unpredictable angles, leaving open the possibility of head or upper-chest injuries.

In contrast, rounds such as Def Tech’s Model 6299 foam baton round, which fires three .40-ounce, foam-rubber projectiles at a velocity of 300 fps, are designed to be direct fired. But the tumbling nature of the projectiles makes precise hits difficult. Various manufacturers offer 37 or 40mm rubber ball rounds. Although the 40mm rounds tend to hold tighter patterns due to the use of smokeless powder, these rounds still cannot produce accurate fire and are designed more for crowd control.

Flexible rounds have been developed in recent years that can be direct fired with excellent accuracy potential. The 12 gauge, square “ravioli” bean-bag round was the first development to give officers an option when the suspect was not a clear-cut deadly threat. The problem with the “ravioli” bag was that it would frequently “frisbee” off course due to its lack of aerodynamic properties.

Today, 37mm and 40mm flexible rounds continue to be developed, including rounds such as the Combined Tactical Systems’ Model 3581 Super Sock, which is a 37mm, 2.12 ounce bean bag stabilized by a tail. The round has a velocity of 250 fps and is accurate out to 20 yards.

Another CTS round is the 40mm, 4557 Sponge Baton. This direct-fired projectile is a 2.12 ounce spin-stabilized foam round that has a velocity of 250 fps and is accurate out to 30 yards.

Targeting and Usage
The improved accuracy of these rounds makes targeting non-vital targets relatively easy. Primary targets are similar to the targets of modern police baton training: motor points such as the common peroneal on the outside of the thigh, midway between the knee and hip; the femoral on the inside of the thigh; the median and radial on the forearm; the buttocks; and the large muscles of the back (avoiding the spine). The abdomen can be targeted as a secondary target. The head, neck and upper chest should be avoided if at all possible due to the possibility of death or serious physical harm.

With these rounds dumping the kinetic-energy equivalent of a major league baseball pitcher’s fastball on a precise target area, these KEM rounds are extremely effective at incapacitating a suspect from a distance, although follow-up shots are sometimes necessary.

There are other less-lethal alternatives, such as the Taser, which have their place. But when distances are beyond their range, KEM rounds can reach out and touch ‘em, providing tactical options other than deadly force when the situation is not that clear-cut or when circumstances allow an alternative plan prior to resorting to deadly force.

2 New Less-Lethal SyStems
Guardian Angel: LifeAct Guardian Angel can stop assailants at a distance before they do harm. The Guardian Angel incorporates a powerful pyrotechnic drive that accurately fires two concentrated blasts of a potent liquid irritant at 90 mph—too fast for an assailant to avoid. Instantly effective, the concentrated solution causes extremely painful burning and swelling in the eyes, nose and throat, temporary blindness and a suffocating sensation that lasts up to 45 minutes.

Until the Guardian Angel became available, the power and potency of OC (oleoresin capsicum, the cayenne pepper extract) has been severely limited by the ineffective hairspray-style aerosol canisters associated with conventional pepper sprays. These canisters are difficult to aim, and when used under stress can be easily sprayed in the wrong direction. Aiming the Guardian Angel is as instinctive as pointing your finger. The ergonomically engineered body orients itself naturally in either hand and operates effectively from any angle or position. Conventional sprays stop working when exposed to heat and cold, but the Guardian Angel performs at temperatures from -5˚ F to 176˚ F. With conventional sprays, an attacker has to be virtually within touching distance to be impaired, and the slightest wind can blow the spray back into your face. In contrast, Guardian Angel’s pyrotechnic drive fires a shot of solution that crosses the maximum effective range of 13 feet in less than .10 seconds. The threat is stopped at a distance, and a second shot is immediately available if necessary.

JPX Jet Protector 270 mph Delivery System: The new JPX Jet Protector is another functional and powerful hand-held OC delivery system from Kimber and LifeAct. The conventional design speeds training and ensures accurate solution delivery, and a pyrotechnic drive launches near pharmaceutical grade OC solution at 270 mph. Effective range is up to 16 feet in the model recommended for general use and up to 23 feet in the model recommended for law enforcement. Each magazine contains two charges with a much larger payload than the Guardian Angel, and quickly snaps on the frame. The power of each payload combined with reloading makes the JPX extremely effective for crowd control, and the conventional double-action-only trigger automatically resets to fire the other charge. Orange or black frames are available, and an integral laser sight is optional.

LifeAct products are some of the most powerful and technologically advanced non-lethal self-defense tools available today. Imported from Switzerland exclusively by Kimber, the Guardian Angel retails for $41.99 and the JPX Protector prices start at $359.99 and are available nationally at sporting goods retailers or directly from Kimber. Inert units are also available for training purposes. For more information contact Kimber at (800) 880-2418 or visit www.life-act.com or www.KimberAmerica.com.

Win The War On Terror: Think Like The Enemy!

Providing options—that’s what law enforcement and military special operations are all about, giving tactical…