by Robert Jordan
in Ammo, Gear
0

Anecdotal information dominates the shooting world, and more than once I have been misled by fun-sounding facts. These days, I prefer to go to the actual experts and look at cold, hard evidence before I pass judgment. A few months ago, my friend J.J. Reich at Federal Premium asked me what I thought of the new .224 Valkyrie. When I answered that I really didn’t know anything about it, he began to tell me how fantastic it was. He must have seen the doubt on my face because he gave me several boxes of Federal’s top-of-the-line .224 ammo to try for myself. 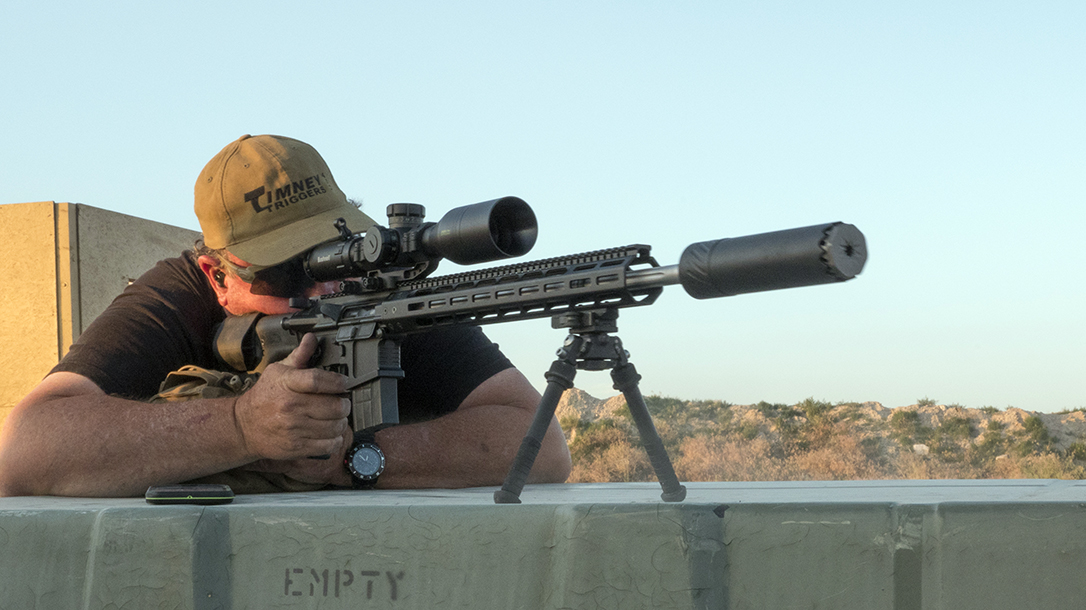 A few weeks later, my editor had a brainstorm: How about a scientific comparison? Take two identical rifles—one in .224 Valkyrie, the other in .223 Remington—along with identical ammo, and pit them against each other. I loved the idea. Don’t tell me that this new caliber is awesome. Show me that it’s awesome. I quickly got to work.

First, I needed two identical rifles—the same in every way except caliber. They also had to be from a manufacturer whose quality is beyond reproach. So, I reached out to Wilson Combat and explained the assignment. Wilson Combat rifles are exquisite works of art that are also combat tough and a joy to shoot. Bill Wilson makes sure he never has to apologize for anything that comes out of his factory, and his employees feel the same way.

The good folks at Wilson liked my idea but told me they didn’t have two identical rifles in .223 Remington and .224 Valkyrie ready to ship. They had a .224 Valkyrie Super Sniper with a fluted, 20-inch, 1-in-6.5-inch-twist barrel in stock. However, they were kind enough to have an identical Super Sniper in .223 Wylde with 1-in-8-inch twist rate made just for this test and shipped both rifles to my FFL.

Meanwhile, I contacted Reich and told him I needed the exact ammunition he gave me in .224 Valkyrie, but in .223 Remington. About a week later, a couple of boxes of ammo showed up at my door. I decided to do my test with my LabRadar because it measures velocities at different distances and will also figure kinetic energy at each distance. Determining the accuracy and felt recoil would be up to me. I didn’t have two identical scopes, so I decided to use my Steiner 3-15x50mm T5Xi on both guns. I’d test one caliber, then switch the scope to the other rifle and immediately test it to keep conditions as identical as possible.

Most of us black gun aficionados are intimately familiar with the .223 Remington and 5.56mm NATO. The military has been fielding the latter since before I was born. But the .224 Valkyrie is new. It starts as a 6.8 SPC case that is then necked down to fit a .224-caliber round. The 6.8 case holds more powder than the .223 but can still be used in the AR-15 platform. Typically, when you move up in caliber with a AR, you have to switch to a larger AR-10-style rifle, which means longer, heavier receivers. It isn’t the end of the world, but AR-10s aren’t as light or fast to maneuver as AR-15s. To shoot the .224 Valkyrie in your AR-15, you simply have to switch out the barrel, bolt and magazine.

But how does it compare to the .223? I hit the range on a calm afternoon. The sun was directly overhead, and everything was perfect for a head-to-head comparison. I sighted in quickly at 25 yards with cheap ammo, then hit the 100-yard line and finalized sighting in on a spare target. I slowly worked my way through the .223 Remington ammo, taking my time and checking my data. Shooting the Wilson Combat Super Sniper was like coming home for Christmas. Then I switched the scope over to the identical Wilson Combat rifle in .224 Valkyrie, sighted in and started the second half of the test.

My first test was for felt recoil, and in this regard, I couldn’t tell any difference between the rifles. They both felt exactly the same. That surprised me a little because the .224 cartridge is noticeably larger. Recoil: Equal.

Next came the accuracy evaluation. I could have gotten tighter groups with a higher-magnification scope, but I used the same Steiner scope on both guns so neither had an advantage. I shot three 5-round groups in each caliber with each type of ammunition. The groups looked similar, but I had a couple of flyers with the Fusion 90-grain Fusion soft points (SPs) in .224 Valkyrie. Maybe it was me. Just to be fair, I compared the best groups, and the .224 won with both types of ammo. Accuracy: .224 Valkyrie.

What about bullet weight? Bigger bullets carry more mass and kinetic energy. The .223 loads used 62- and 69-grain projectiles while the .224 Valkyrie projectiles were much heavier at 90 grains. Is this important? Would you rather be run over by a dump truck or a VW Jetta? Size matters. Bullet Weight: .224 Valkyrie.

Increased velocity helps everything except for felt recoil and barrel life. The recoil was a moot point in this test, and most hunters won’t wear out a barrel in less than three generations. In my testing, the .223’s velocity was 128-fps faster on average at 50 yards. But this is a tad misleading because the .223 loses velocity much faster than the .224. Federal’s testing shows that 69-grain .223 Remington Gold Medal Sierra MatchKing (SMK) will go subsonic and lose its stability at 775 yards with a 24-inch barrel. The .224 Valkyrie SMK load stayed supersonic beyond 1,300 yards with the same barrel length. Velocity: .223 Remington initially/.224 Valkyrie at distance.

Then everything changed with the ballistic coefficients (BCs) with these bullets, or how well they cut through the air. A higher BC means less drag, and less drag means flatter shooting and less wind effects. The BC is of little importance inside of 100 yards. However, when you want to take shots out past 500 yards, the BC becomes very important. With our test loads, the .223 and .224 Fusion rounds have BCs of .310 and .424, respectively. The BCs for the SMK loads are .301 and .563, respectively. That’s a huge difference! Google the BC of your favorite round and see how it compares. BC: .224 Valkyrie.

Kinetic energy is the final consideration. In years past, we only looked at kinetic energy to determine whether we had “enough” to take down an animal of a certain size at a certain distance. It’s important, but it can easily be misleading. Bullet design, particularly with modern projectiles, trumps kinetic energy. You don’t need 1,000 foot-pounds of energy (fpe) to kill a deer. Guys with compound bows do it with less than 100 fpe. Modern bullet designs allow for devastating initial wound cavities and greater penetration and expansion at lower velocities. This means we can humanely harvest animals at greater distances. But even so, more energy is always better. It’s better to crush them with a sledge hammer than ping them with a tack hammer. I checked every load’s kinetic energy at 50 yards, and the .224 Fusion rounds had 318 foot-pounds more energy than the .223s. The .224 SMKs had 155 foot-pounds more than the .223. Kinetic Energy: .224 Valkyrie.

The .224 Valkyrie was designed for the long-distance shooter who wants to take the AR-15 platform as far as it can go. The .223 Remington starts out faster but, due to a far inferior BC, drops off much more quickly. The .224 Valkyrie isn’t going to replace the .223 anytime soon. However, the .223 was introduced back in 1957, and the .224 Valkyrie was introduced just a few years ago. Technology matters, and we have better designs today. If you are thinking about competing in PRC match or want to kill coyotes at 1,000-plus yards, the .224 Valkyrie is the pinnacle of modern design for long-distance black gun shooters. For more information, visit federalpremium.com and wilsoncombat.com.

Bullet weight measured in grains, velocity in fps by LabRadar, accuracy in inches for three 5-shot groups at 100 yards, and energy in foot-pounds at 50 yards.