by Frank Melloni
in Ammo, Gear
0

The .223 Remington is a staple of American shooters. This round has served competitors, hunters and homeowners equally well. The hotter 5.56mm NATO has been defending our country for more than 50 years. While the latter wasn’t accepted in its infancy, today you’d be hard pressed to find a gun safe that doesn’t have at least one rifle chambered for it. And many choose the 55-grain 5.56 as their go-to carbine round. 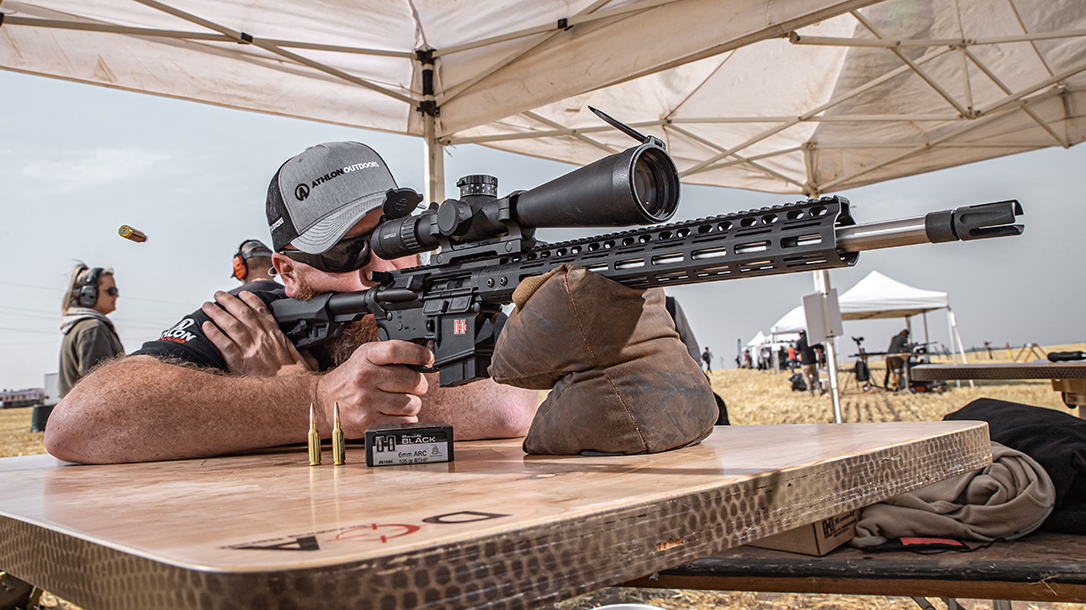 VIDEO: Is Hornady’s 6mm ARC Cartridge the Best Ammo for Your AR-15?

Because of its popularity, nearly every manufacturer makes at least one .223 Remington/5.56mm NATO load that uses 55-grain FMJ projectiles. This configuration is important for manufacturers to produce, as it mimics the military’s M193 load. From time to time, Uncle Sam seeks out a new company to run his Lake City plant, so perfecting this round might mean beaucoup money.

With the widespread availability of this 55-grain ammo, I set out to see which one was the “best” at doing what it does. My criteria were accuracy and reliability, as most shooters only care about those two aspects. Sure, we can argue one might be “cleaner” than the other, but is there any honest way to quantify those claims? Besides, you shouldn’t have any aversion to cleaning your rifle!

This is a no-nonsense evaluation. I’m not going to waste any time talking about powder charge consistency or which rounds have the most uniform overall length, as these measurements don’t tell you half as much about a given ammo sample as loading a magazine’s worth and firing it.

While there are dozens of AR configurations out there, for the most part, you’ll find guns that are built to be accurate and guns that are built to be maneuverable. So, to represent the former category, my friends and I chose an Anderson Manufacturing Sniper upper with a heavy, 24-inch, fluted, stainless steel barrel with a 1-in-8-inch twist rate. We added a Nikon 6-24x50mm Black FX1000 scope as well as a new Warne Skyline bipod. This setup ensures we had a repeatable point of aim every shot. For our “run and gun” tester, we decided on an Anderson Manufacturing M4-style upper with a 15-inch barrel, which represents the most popular AR-15 on the market.

We ran both uppers on an Anderson lower receiver equipped with a crisp Rise Armament RA-535 trigger. We ensured each system had the appropriate buffer setup to support the gas system of the upper we installed. For the last five years, we have had nine of these lowers in service at Renaissance Firearms Instruction, mated to uppers chambered in a variety of cartridges. Each year, these guns digest upwards of 10,000 rounds each, and I can’t find a reason to spend more money on a lower receiver.

I then rallied up seven 55-grain FMJ loads, all from different manufacturers. With an understanding that these rounds weren’t designed to punch one-hole groups when fired through a 16-inch barrel, I limited the “run and gun” rifle to function testing. So, we started by running 60 rounds of each load and counted how many failures we had, if any. We then switched to the 24-inch-barreled Anderson Sniper build to obtain some velocity data by shooting 10 rounds over a simple and precise MagnetoSpeed V3 chronograph. Then it was time to measure each load’s accuracy by firing five-shot groups at 100 yards. Both guns were allowed to cool before switching loads.

As you already know, one of the advantages of having a barrel chambered for the 5.56mm NATO is that you can run lower-pressure .223 Remington ammo as well. Black Hills only makes a 55-grain FMJ in this chambering, so we went with it for our sample. And boy, were we glad to that we did, too, because it turned in a dynamite group of just 0.67 inches at 100 yards and ran fairly well in our long-barrel setup. We experienced just one failure to lock the bolt back on the 24-inch-barreled build, but did not have a single malfunction in our carbine function test. (black-hills.com)

Federal’s American Eagle line was born to hit the mark on value for budget-minded shooters. Of course, the company also knows a thing or two about making 5.56mm ammo, as it ran the Lake City plant at one point.

As we filled our magazines, we noticed that the brass was very dull and saw light variances in seating depth. However, every case was from Lake City this year. This has always been my go-to brass for match reloads, as it is tough as nails and outrageously consistent. The performance was right on par with the Winchester “White Box” ammo, as it provided perfect feeding and ejection and left us with groups in the 2-inch range. (federalpremium.com)

As a joint project with Lake City, Hornady entered the affordable ammo market with its Frontier line of ammo. The .223 Remington load was naturally at the forefront, and we were excited to have some of this in the mix. We have used the 75-grain variant in our long-range courses, and students were able to successfully hit bowling pins at 1,040 yards using a 1-in-9-inch-twist barrel.

As I ripped the package open, the brass seemed tarnished but clean. These cases were also annealed, but more concentrated to the necks and shoulders. More importantly, the rounds cycled perfectly in both guns and even produced a 1.06-inch group at 100 yards, with the first four shots landing inside of 0.5 inches. As we were reminded, Hornady doesn’t make anything “cheap.” The best the company can do is inexpensive. (hornady.com)

The 55-grain FMJs from HSM stood out with their deep, uniform annealing. The rounds were exceptionally consistent, down to the WCC brass from 2011. They also ran flawlessly in our 16-inch-barreled upper, but that wasn’t the case with the 24-inch-barreled build. The most common issue: Spent cases ejected, but the bolt didn’t cycle hard enough to pick up the next round. This didn’t happen frequently enough to stop us, but those looking to run HSM rounds should choose heavier projectiles. That said, the accuracy was pretty good, as our groups hovered right around 1.5 inches on all of the targets. In our five groups, we didn’t have one single flyer that opened up the recorded measurement. (hsmammunition.com)

Naturally, we wanted to hear from Big Green on the subject, so we ran some of Remington’s popular UMC rounds through our tabletop armament. Our rounds came out of a 200-count Mega Pack with an MSRP of only $97. The ammo ran well, too, and the cases ejected into a neat pile. The accuracy results weren’t bad, either. Our best group of the day came in at just 1.09 inches. The brass had a light annealing as well, making it another solid choice for reloading. (remington.com)

A few years back, the prestigious Sig Sauer turned its attention to ammunition. And the Elite Performance rounds we received were spotless—just like Sig’s guns. The load had good, uniform annealing, and even though I swore I wasn’t going to mention it, absolutely consistent bullet seating depth.

The rounds were also fully reliable and smooth with both guns, and we noticed less felt recoil. Our chronograph readings confirmed they were among some of the slowest rounds fired, but my shoulder told us first. The accuracy was okay but wasn’t a great fit for our guns, as the best group we were able to produce was just inside 2 inches. This was surprising given previous experiences with this ammo. However, although we love being able to simply call ammo “accurate” or “inaccurate,” it’s important to remember that these were just the results from one gun on one given day. (sigsauer.com)

This test wouldn’t be complete without this everyday load, especially since Winchester just won the contract to operate the Lake City plant. While the HSM cases required sunglasses to look at, the Winchester rounds had the dullest brass. However, that said, the cases were still lightly annealed, extending their reloading lifespan.

While this load ran flawlessly in both guns, the accuracy was a bit so-so, with our best group landing just inside 2 inches at 100 yards. Still, considering this load’s price and availability, I wouldn’t hesitate to stock up on it for a 3-Gun match or a day of banging steel on the range. (winchester.com)

Overall, we didn’t shoot any “bad” rounds. Of course, some were more accurate than others, and one or two brands had a few hiccups. But, like most aspects of the shooting world, one must take into account their application. While the HSM load is a good fit for someone looking to plink today and reload tomorrow, Winchester’s FMJs might be better for the guy who plans on leaving his brass in the dirt. Looking for match-grade performance without the match-grade price tag? Maybe Hornady or Black Hills is your ticket. With the standard 55-grain loads, the possibilities are endless, so grab a box of each and see what your gun prefers. Above all, have fun in your testing, because a day on the range should never feel like work!