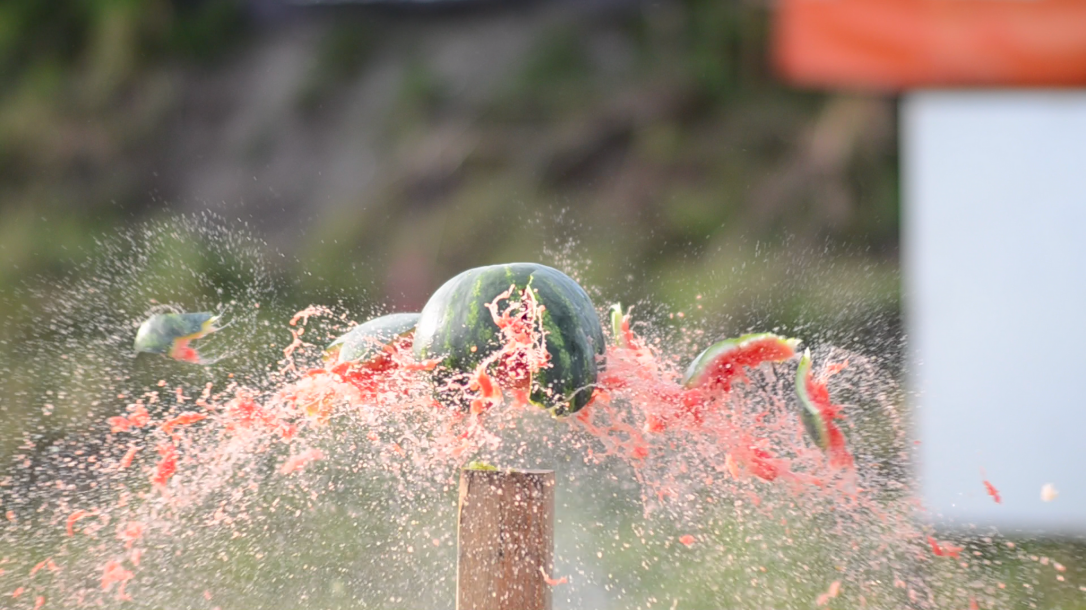 9mm ballistic testing is always a fun topic. The 9mm is versatile by nature, and has grown to become the most popular handgun cartridge in the world. It strikes the balance between stopping power and recoil that defenders have been seeking since long before its creation. Relatively inexpensive practice fodder can be found at just about any gun store shelf. This makes it realistic to practice with the very gun that you carry. 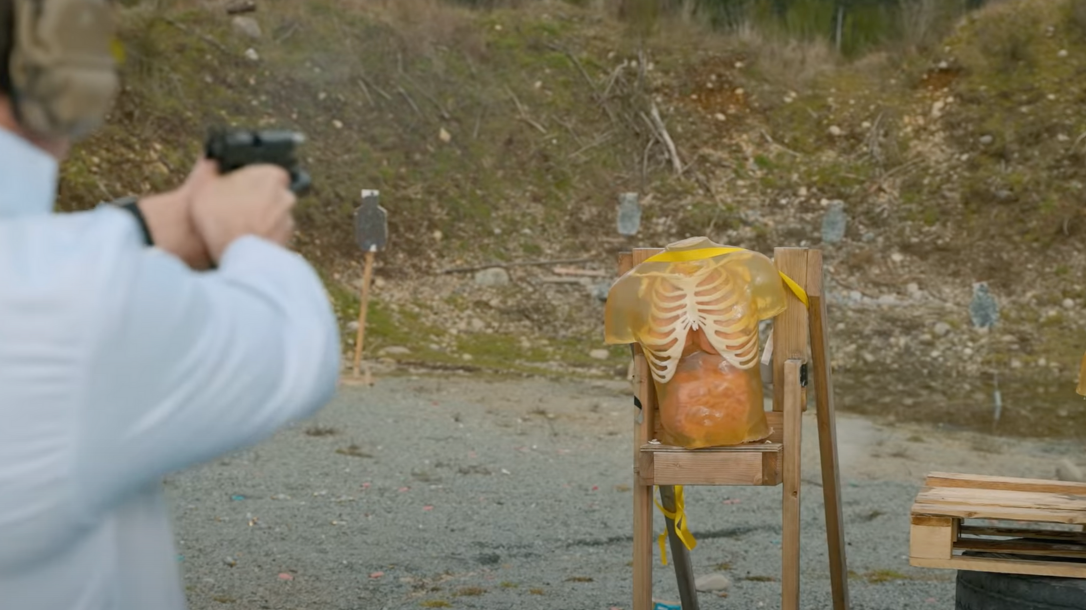 While practice ammunition can be purchased with very little thought, defensive ammo not so much so. As there is a chance that you could be staking your life on it one day, we decided to make it one of this year’s “Ammo Match” features and bring you eight of our favorite 9mm self-defense loads.

The Rig for 9mm Ballistic Testing

I needed to keep my 9mm ballistic testing confined to just one pistol. But which one? 9mm barrels typically range from 3-5 inches so I decided to go with something that landed in the middle. I went with Canik’s new METE SFT with its 4.46-inch barrel. I mounted a Riton 3 Tactix MPRD red dot and quickly cowitnessed it with the iron sights. Packed the car with a Caldwell G2 Chronograph and some Clear Ballistics 10-percent FBI gel. After that, there was nothing more to do before hitting the range.

First up was the Underwood Xtreme Defender. Imagine what it would be like getting hit with a Phillips-head driver-bit flying faster than the speed of sound? If I didn’t know better, I would think that was the very inspiration for Underwood’s Xtreme Defender projectile. This solid-copper bullet is built to stay together through even the hardest barriers. Additionally, it’s designed to push fluid outwards when it makes contact with something living. It’s a unique principle because it dismisses velocity as the primary component in the stopping power equation. The magazine and chamber didn’t seem to think anything of the unusual bullet shape. We fired over 100 with no issues during a range session. Accuracy was among the top of the rounds that we tested that day. Ironically enough they were the fastest all-metal projectile that our chronograph recorded with a 10-shot average of 1,447 fps.

Wilson Combat ammunition is built on the premise that good guns need good ammo. Most of Wilson Combat’s ammo is made for a specific barrel length. This particular round was built to deliver its best performance in a five-inch barrel. However, with the market being what it is I am sure that it will see service in many guns. So, I was more interested in its “off label” use. Out of our 4.46-inch barrel, we hit the advertised velocity and produced five-shot groups as small as 1.69 inches. I was also fond of the fact that these rounds were built with a 124-grain XTP bullet. Our test showed that Wilson puts the same attention to detail into its ammunition that it does in firearms. Thus, alleviating any apprehension that one might ever have with keeping these on your hip.

Novx was the most unconventional ammunition of the batch with its poly/copper projectile and its stainless-steel cases. These rounds are the epitome of the “speed over weight” argument. They launch their 65-grain pills as fast as 1,665 fps out of our mid-sized Canik. Between the projectiles and the cases you’ll notice a significant weight reduction in a full magazine. When shooting them, we noticed negligible recoil with uninterrupted cycling, even to lock the slide back after the last shot. NOVX boasts that this round generates more energy than .45 ACP. After comparing it to the last three .45 ACP loads that I fired, I found that to be completely true.

Legendary competitive shooter and hunter, Doug Koenig, came out with his own line of ammunition a few years ago. As a Pennsylvania resident, he is no stranger to concealed carry. Using a lightweight 110-grain JHP bullet, Doug and the boys were able to hop velocity up to 1,324 fps. That makes this the fastest round that we tested. Doug used this round in the USPSA nationals. Its power factor of 145+ made minor with juice to spare. That day it also had zero issues knocking down the heavy steel pepper poppers. We found the round to have a little bit of snap when we touched them off. However, the recoil pulse was rather short, and the overall lift was particularly mild. Good stuff when you need to send a rapid follow-up shot.

Fiocchi Defense Dynamics were the only rounds this day that came packaged in boxes of 50. With their affordable price, you can shoot half of the box at the range. Then, save the other half for an emergency. This also eliminates any reason that you may have not to cycle out your carry ammo every few months. Advertised as flying at 975 feet per second, we wound up with an average velocity of 954 FPS. This is below the speed of sound, so these rounds were quieter than the other ammo. The slow-moving 147-grain JHP projectile generated a long push of recoil that was present on the wrists and barely caused the gun to come off target in between shots. Overall, these make a great choice for the high-volume shooter that wants to practice and defend with the same round.

In 1989 Hydra-Shok was revolutionary, more than 30 years later it found itself missing out on all of the advances made in modern bullet construction. Federal doesn’t shy away from fiddling, and the Hydra-Shok Deep illustrates this vividly. Using a 135-grain projectile, it felt like they struck the balance between speed and weight and left us with a round that was no slouch in the energy department and at the same time manageable. The elongated, rounded bullet profile had no trouble feeding, and we gobbled up 100 rounds like it was 2018 again. It landed in the top half of the accuracy chart and came in first in the standard deviation category, showing that these are built to exacting standards. Bringing this round in for our 9mm ballistic testing was kind of a blast from the past.

The Browning X-Point Defense ammunition was one of the sexiest looking rounds that I fired that day. They look like something designed to kill werewolves or at the very least hang from a stripper’s earlobe. The projectile design is unique yet simple, a classic hollow point with a cross partition helps them to hold their form when crashing through barriers. As these were another slow-moving 147-grain load, the recoil was again very light and let us send lightning-fast double-taps downrange. To top it off, these rounds produced silly tight groups on our 15-yard target with nearly every one measuring less than an inch. Surprisingly to most, (but I see it quite often) these produced the most consistent groups although they had one of the largest standard deviations. This again shows the futility in picking ammo “by the numbers.”

This defensive load from Barnes gets the job done without lead, just like in its signature hunting ammunition. I have used said hunting loads to devastating effect, hence why I was interested in seeing how the same technology performed in this loading. The XPD bullet is built from monolithic construction, which again helps it break through common barriers with minimal deflection. This ensures that they remain lethal when they get to the other side. I can’t stress the importance of that aspect enough in carry ammunition. The lightweight 115-grain projectile was among the softest shooting we had that day, which is typically uncharacteristic of rounds built with bullets within this weight range. Accuracy was suitable for its intended use, and we found that the velocity generated was balanced just right to yield fast shot-to-shot recovery.

For the gel portion of our 9mm ballistic testing, I decided to go with the Barnes TAC-XPD and the Browning X-Point as these two designs were the newest I’ve ever encountered. Additionally, the NOVX and the Underwood ammo aren’t meant to expand. Gel testing those rounds would have looked like shooting FMJ. Besides, I’ve already tested this design in the past and have confirmed their energy transfer by making fruit salad the easiest way possible.

The Barnes penetrated both a layer of leather and a layer of denim before passing through 12.5 inches of the Clear Ballistics gel. It started expansion within the first 1.25 inches, working exactly as advertised and earning a spot in the magazine of my nightstand gun. Browning’s entry passed through the same material and a full 16-inch block before landing more than an inch deep into a second block (that’s why I always use two). The expansion started at 1.5 inches and happened over a longer period, making them equally suited for defense against larger, four-legged threats.

It’s important to understand that this column isn’t picking a winner. I purposely selected rounds of equal quality to show our readers a handful of possible options for the articles given application. Yes, some of these rounds grouped better than others and some generated more energy, but before picking one it’s important to consider other factors like recoil and cost per round. Lastly, this article gives you eight different options that are all more than adequate for defensive purposes. However, your selection might only come down availability.

Julie Golob is one of the most accomplished professional shooters, and now she's partnered...