The 300 AAC Blackout was standardized from its wildcat predecessor roughly a decade ago and has since become one of the most popular cartridge choices for the AR-15 platform. Big-name makers like Remington and Ruger have also brought out bolt-action rifles chambered for the 300 Blackout. Almost universally, these rifles are short, handy and suppressor-ready. 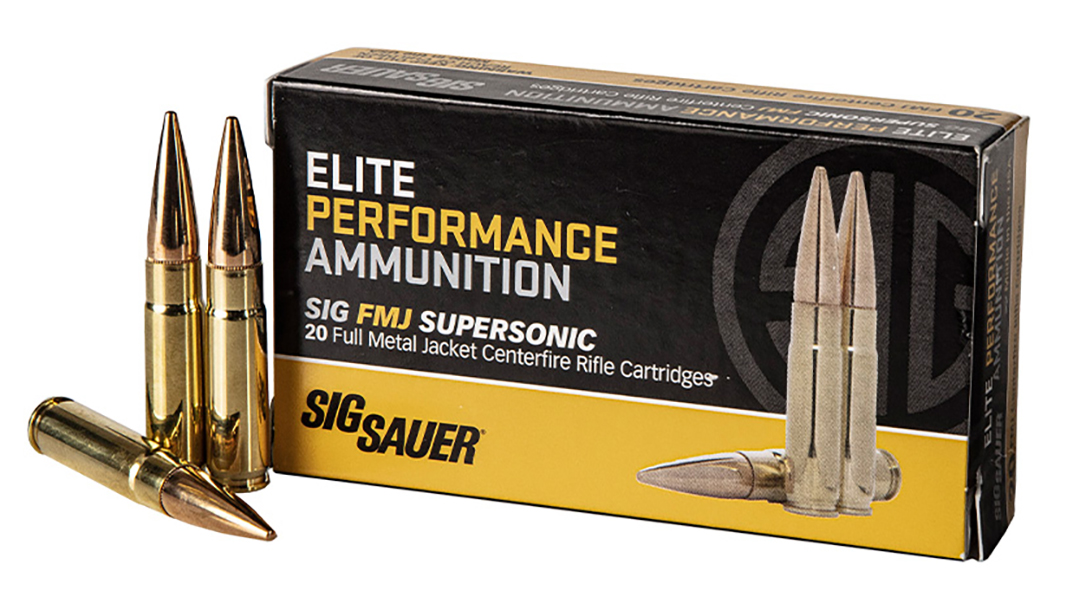 In fact, the timing of the standardization of the 300 Blackout and the huge boom we’ve seen in suppressor sales in the last decade are definitely related. With the ability to shoot suppressed 300 Blackout rounds, the market has demanded more options from ammo makers. Hornady produces factory subsonics like the hugely popular 208-grain A-MAX load in its Black line, and expanding subsonics like the 190-grain Sub-X. Ammo giant Federal offers an affordable subsonic option in its American Eagle line.

Remington and Winchester also have subsonic loads in their affordable UMC and White Box lines, respectively. Imported subsonics are available from Magtech, Armscor, Geco and Sellier & Bellot. High-end maker Lehigh Defense offers what are arguably the most high-performance subsonic tactical loads for the 300 Blackout. Additional varieties are available from numerous less well-known manufacturers like Engel Ballistic Research and Atomic Ammo. The short version of all this is that times are good for those of us who like to shoot subsonic 300 Blackout ammo.

Many of the available factory subsonic loads are intended solely for range use. Most are loaded with heavy match or ball projectiles that are neither designed nor intended to expand in tissue in a hunting or tactical scenario. I enjoy shooting these tremendously, since I can shoot my AR in my pistol bay, where I have multiple inexpensive mild-steel targets. This lets me keep my expensive AR500 steel targets on the rifle range but still get the fun of ringing steel in training with my AR. However, I have found a noticeable divergence in the point of impact (POI) among different brands of subsonic ammo, so always confirm the POI differences between your training and tactical rounds.

Lehigh Defense spearheaded much of the early progress made on bullets designed to be effective at subsonic velocities in tactical situations. Its Maximum Expansion projectile is an all-copper bullet that expands massively at subsonic velocities and typically retains 100 percent of its original weight. Recently, the company added the Controlled Fracturing Subsonic line with two projectile options weighing 168 and 198 grains. But as good as the Lehigh Defense offerings are (every 300 Blackout shooter should have several mags loaded with the company’s Maximum Expansion ammo), they aren’t cheap, to say the least. Other manufacturers, including Maker Bullets, offer premium monolithic bullets and loaded ammo designed to expand at subsonic velocities. Again, these are top-shelf offerings—the component bullets alone cost more than $1 each.

Enter Hornady’s 190-grain Sub-X ammo. The Sub-X launch was hugely exciting because it gave us the first expanding subsonic ammo from a major manufacturer that we could buy and actually shoot without having our wallets burst into flames. In fact, the Sub-X ammo costs less than half as much as the CNC-machined monolithic options from Lehigh and others. This is accomplished in two ways: manufacturing scale and projectile design. High-end expanding subsonic bullets like the Lehigh Defense models are CNC-machined from solid brass or copper in relatively small quantities.

The Sub-X is a jacketed lead-core bullet that can be mass-produced at high speed. There is no doubt that the Sub-X won’t make picture-perfect expanded bullets the way Maximum Expansion or Maker Rex bullets will. Truthfully, I’d still pick the Lehigh Defense load if I had to face off against two-legged predators with a subsonic 300 Blackout, but for four-legged predators and other varmints when stealth is on the menu, I’ll take the savings of the Hornady every time.

So, what’s in it for the handloader? As usual, significant savings can be achieved when we clone any of these excellent tactical loads with our own handloaded ammo. Here we’ll compare the cost of handloading against buying the super-premium rounds from Lehigh Defense and the more budget-friendly Hornady Sub-X, as well as a few plinking rounds that use traditional match (non-expanding) bullets.

Starting with a quick search of some online retailers, the cost of a box of 194-grain Maximum Expansion ammo from Lehigh is $39.80, or $1.99 per round. A box of fifty 194-grain Maximum Expansion component bullets costs $63. If we assume an existing stock of reloadable brass, $0.04 per primer and $22 per pound of powder, we can load a clone of that round for approximately $1.34 per round. This is a savings of $0.65, or just over 32 percent every time we pull the trigger. To make the impact of that more immediately recognizable, every 30-round magazine of handloaded Lehigh Defense clones saves you $20.

With the newly released Hornady 190-grain Sub-X component bullet—so new I haven’t loaded any as of this writing—we can handload a clone of the factory round for a jaw-dropping $0.42 per round. This puts the cost of an expanding subsonic round right down around the same price as the least expensive factory loaded round from a value brand such as American Eagle or UMC. Compared to the factory ammo, which sells for around $1.08 per round, we’re saving $0.66, or more than 61 percent with each shot! If you like expanding subsonics as much as I do, that 190-grain Sub-X just keeps looking better.

So how does the math work out with traditional non-expanding or match bullets? With the 190-grain Nosler Custom Competition, we can load each round for $0.40. Stepping up to a 220-grain Custom Competition brings the cost up to around $0.52 per round. Using the Sierra 220-grain MatchKing, we can load each round for $0.54. The Hornady 208-grain A-MAX has been replaced by the 208-grain ELD Match, which can be loaded for around $0.50 per round. It’s also worth noting that some of these bullets can be found online as factory seconds at reduced prices for additional savings.

If your barrel fails to stabilize any of these long projectiles, it may be worth a shot to try the 200-grain FMJ bullet from Lapua. This bullet is designed for subsonic use with a rebated boat tail and will stabilize in some barrels that fail with other designs. To reiterate, all of these non-expanding options fall into the category of training ammo. Don’t use these loads for tactical or hunting situations. With the availability and price of the Sub-X component bullet, I’m leaning toward that as a one-and-done solution, save for the occasional smoking deal on blemished bullets or other special deals. 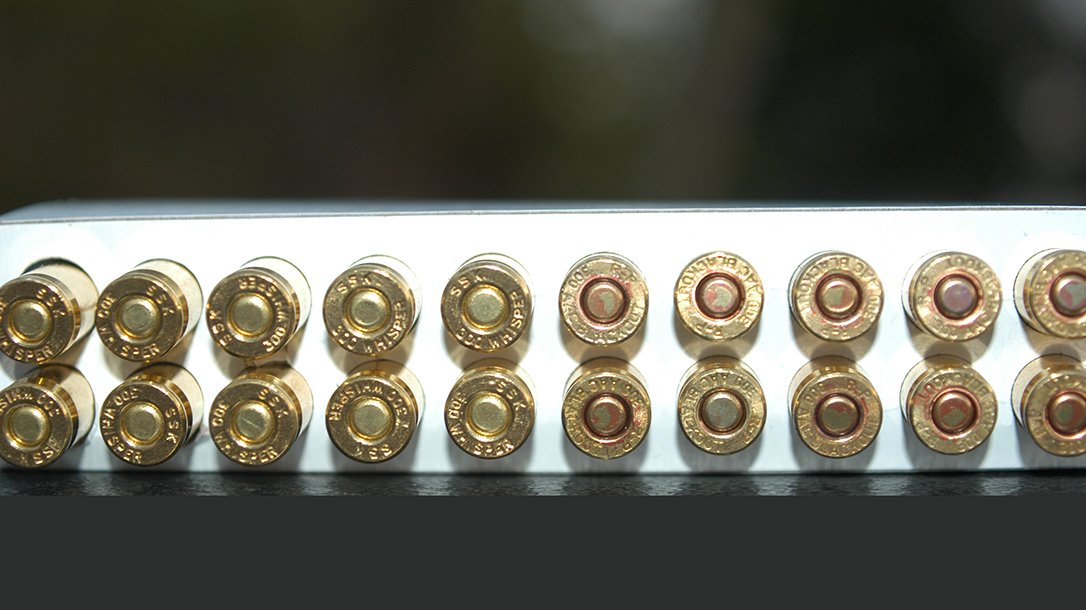 Loading subsonic ammo is done in reverse from the way we traditionally load supersonic loads. Rather than overpressure, the danger with subsonics is having a bullet lodge in the bore from an inadequate powder charge. Send another round behind a stuck bullet and you have real problems. For this reason, we start high and work down. In this manner, we eliminate the danger of a bore obstruction. Below we listed the charges for my barrel and one on either side of the ideal charge. It shows the velocity spread these small changes make. Start above these numbers by a full grain and work your way down. As always, consult multiple loading manuals to cross-reference your data. Never load from a single source.