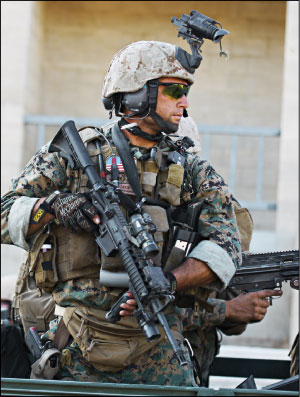 One of the more interesting by-products of my writing for the last 20 years is that I have found that I am not a gear guy. While this may sound like a paradox since the job of a gun writer is to test guns and related equipment, I have found that it has made me wary of all the kit that is available to allegedly help win a fight. Over the last two decades, my articles have focused on law enforcement and personal defense, as it is what I know and what I have experienced. When I test a product, I can’t help but apply this personal experience to the test. I was a cop for 30 years and now work in private security.

I bring this to the reader’s attention only because what I feel is worthwhile on an AR-15 is quite different than what someone feels who’s looking for the Taliban on the Afghanistan border or conducting direct action missions in Iraq. The Webster’s Dictionary defines the word worthwhile as; “worth the time or effort spent, of true value”. In the case of accessories for the AR-15, “of true value” would depend on one’s operational parameters and would fill a real need—not just stuff that looks cool. Gadgets will never replace solid training and commitment to prevail in a fight, but equipment that meets a real need will certainly make the task easier. With this in mind, I searched the aisles of the 2007 SHOT Show for AR-15 accessories that I truly felt were worthwhile to the law enforcement or security professional.

Stag Arms
Accessories are a waste of time if they are not attached to a totally reliable gun, or at least one that is as reliable as humanly possible. I found this level of reliability at Stag Arms. This company had been making components for the AR-15 for many years before they decided to make their own version. I selected the Model 3, as I like the idea of being able to fold both the front and rear sight out of the sight plane of my optical sight. I have been told that you can train yourself to ignore the front sight tower and I am sure that this is true. It’s just that I prefer having a simple, uncluttered field of view. The Model 3 comes with a screw-on gas block that will accept a fold-down front sight. Some in the know have stated that this is a bad idea, as the screws can loosen with use, creating a gas leak. I’m not concerned with this, as I lock down these screws with red LocTite and then peen them in place. These screws are not going anywhere and neither is the gas block.

I have been using my Model 3 for over a year now and have a documented eight thousand rounds through the gun. I clean it after every trip to the range and I can honestly say that I have never had a malfunction with it; the Stag Arms is a real pleasure.