by Eric Poole
in Ammo, Gear
0

Even the gloved hands of today’s uniformed officer will find ArmaLite’s new AR-10T familiar. Draw the fixed stock into the shoulder, obtain sight picture and flip the selector. What makes the AR-10T different is more about what’s on the inside. But on the outside, it all seems to feel the same.

Since the creation of the Department of Homeland Security, law enforcement agencies have contended with how to use their budget to best enable their first responders to protect citizens against terror. Every agency has assessed vulnerabilities and many have chosen to acquire big bore rifles capable of penetrating a hard target or intercepting a vehicular threat. With just one shot to get it right, a team leader should have experience on the firing line. 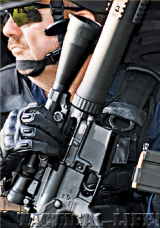 hard-hitting .338 Federal, the new AR-10T fills a department’s medium-caliber gap without sacrificing ease of deployment, time for training, or familiar handling qualities of an officer’s carbine.

What some don’t realize is that the AR-10’s roots are more than 50 years old, pre-dating the AR-15/M16/M4. Clenching the checkered A2 pistol grip, controls are at the fingers. Saving more than a pound in weight over 7.62mm NATO infantry rifles of its time, Eugene Stoner’s modular innovation is a source for the often-used term “ergonomic” (as it applies to firearm design).

The anodized lower receiver is home to the ArmaLite tactical two-stage trigger set, the same trigger mechanism used in ArmaLite M-15 rifles. Pulling the trigger provides a crisp and smooth feel that doesn’t interfere with accuracy. First and second stages are consistently passed at just 3 and 5 pounds before allowing the hammer to strike.

Being that the AR-10T is based on a 7.62mm NATO platform, the first question that usually comes to mind is how ArmaLite manages to stuff the high energy behind a .338 cartridge into an AR? An ArmaLite representative reports, “ArmaLite’s refinements to the AR-10 over the many years placed it at a stage where the transfer to a harder hitting caliber such as the .338 Federal was not a problem. It’s a short action .308-type cartridge so it transitions into our AR-10 platform perfectly. With some testing, we found that it’s a fitting combination. We were able to use the same proven bolt and extractor, as well as the Generation II magazines. No design changes had to be made except re-chambering the AR-10 for a new caliber.”

The bolt sits inside a gas impingement carrier group with four holes available to bleed off pressure and debris. The disassembly procedure is the same as an agency’s M-15 carbine (just bigger parts). With the firing pin removed, one difference from other ARs is visually apparent. A spring shrouds the base of the firing pin pushing against the wall in the bolt carrier group. This feature helps reduce the risk of malfunctions and prevents the firing pin from bouncing during operation.

A railed flat-top upper receiver marked “.338 Federal” brings the bolt together with the chamber of the stainless steel barrel. “We originally designed the .338 Federal as a hunting rifle, thus the stainless steel barrel,” says ArmaLite. “The .338 Federal is a cartridge best suited for short and mid-range duties. We put a 22-inch barrel on the rifle, which provided the best ballistics for these situations. With that being said, we have seen the potential for different uses in this caliber, so we are spending some time testing a shorter rifle with a 16-inch barrel featuring a full size buttstock and a mid-length gas system to use in CQB operations.”

A tubular one-piece, free-floating aluminum handguard shields the hands from the triple lapped, 1-in-10-inch twist stainless steel match barrel. The tubular handguard improves the rifle’s handling without taking up real estate with full-length accessory rails that often go unused. A useable length of rail does grace the forend of the handguard, ready to accept custom mounting of bipods, lasers, lights and other accessories.

The massive stainless steel gas block is secured to the barrel with four large hex-head screws and redirects gas pressure through a direct impingement system. This gas block is also a front sight base that features a flip-up Midwest Industries (MI) post that co-witnesses with a MI flip-up backup sight affixed to the rear of the upper receiver’s Picatinny rail.

Since no flash suppressor or compensator is present, the recessed crown at the muzzle of the AR-10T protects the rifle’s accuracy potential during heavy use or intense tactical operations. Combine a barrel made of stainless steel, an aluminum free-floated handguard, aluminum alloy receivers, a polymer stock and grip, and you have a weather-resistant tactical rifle. The AR-10T can withstand harsher environments like those encountered in sustained maritime operations while offering the effective energy transfer carried by a .338 slug. “Coastal areas with salty environments and the moisture of the trunk in squad cars are hard on steel parts, especially the barrel,” says ArmaLite. So stainless steel might be a better choice for these conditions.

Shooting Impressions
Now I’m not going to lie and say that I found the AR-10T to be a sub-MOA tack-driver. For me, it wasn’t. I have friends in this industry who tell me they achieved MOA accuracy verified by pictures on Jeff Quinn’s gunblast.com of multiple 3-shot groups fired from 100 yards rivaling the size of a penny. But this test was a representation of how a founding member of DHS envisions this rifle being used by law enforcement. On the scene, from the trunk of a vehicle, and across the hood.

Driving down to the edge of North Carolina’s Great Dismal Swamp brought me to a private range that required the careful use of four-wheelers to maneuver through knee-deep muck in order to get downrange and post targets. A pair of 12×18-inch ballistic steel plates were used to verify the new Leupold VX-3 6.5-20x50mm riflescope from 100 yards. Secured in ArmaLite’s unique one-piece ring mount, this accessory removes a couple of variables that typically impact accuracy on other rifles. 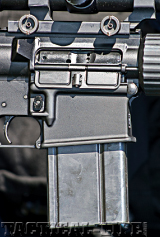 In rural parts of the US, it’s not unusual to see a pick-up truck used as a law enforcement vehicle. To best simulate a tactical operation where a vehicle is used as cover and firing support, we positioned the vehicle at the firing line and loaded each (5-, 10-, and 20-round) magazine with the only load available for this test: Federal’s lead-nose, copper jacketed, 210-grain Nosler Partition.

The first 3-shot group from each of us measured just under 2.5 inches. Making it downrange and changing out targets, we discovered an earlier sighter that went off course and punched through a 5-inch thick tree. Looking further back, we saw the bullet had actually passed without deflection through a total of six trees smaller in size and spaced about 4 feet before disappearing.

Most accuracy results with other AR-style rifles are taken in 5-shot groups, so the next batch would follow this pattern. Five groups of five shots averaged nearly 3 inches off the semi-supported position with the best group measuring 1.94 inches. The most impressive observation came from our last test, a 20-shot magazine dump in quick succession. In a string of fire that lasted no more than 30 seconds, 20 shots were clustered together in a group measuring just 3.6 inches. This is practical accuracy you can expect of a trained officer that could put a definitive end to a given crisis.

Final Notes
“If you benched it with a bipod, it’d group a lot tighter,” noted the DHS agent, “but this is realistic. This rifle is what you hope to have when you arrive to a dynamic situation forcing you to run what you have.”

With the AR-10T you get a heavier bullet, lower felt recoil and more energy transferred to the target. This lethal hammer is ready to meet the obstacles faced by LE in urban environments or on the maritime waters.

FEDERAL’S BOLD .338
There are other .338s out there but none that can be easily integrated with fewer changes to the seasoned AR-10. The story here is as much about the united effort between ArmaLite and Federal Cartridge to assure the rifle and ammunition are perfectly matched. Snipers are already familiar with .338s including the .338 Lapua Mag and the .338 Win Mag. These two highly effective cartridges are known for their long-range effectiveness in bolt-action platforms. For most LE operations requiring the deployment of a rifle, a bolt gun presents a number of tactical drawbacks. Slower handling, more recoil, and slower follow-up shots.

The .338 Federal delivers the only modern .338 caliber load that isn’t a magnum configuration. It delivers a larger diameter bullet for more weight and overall energy on target without magnum recoil. “The .338 Federal captures the capability of the longstanding .308 case and offers the respected performance of the .338 bullet,” says Federal President Mark DeYoung. “These two mainstays have been proven time and again and are now brought together into a quality factory load,” he adds.