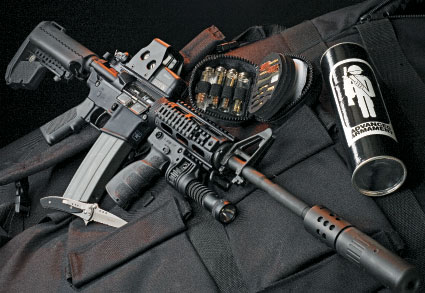 When the Illinois State Police (ISP) decided to equip its officers with patrol carbines, it was only natural that they would contact the “home team,” ArmaLite, although the award was based on competition between several manufacturers and ArmaLite won because of overall quality rather than the cheapest price. Speaking of quality, the fit and finish of this carbine was one of the best we have ever seen. All metal components are either anodized or phosphated a uniform matte dark gray and there is absolutely zero play between the upper and lower receivers. The fit was so tight that we initially thought that ArmaLite had inserted an Accuwedge in the lower receiver to tighten things up, but the fit of the two components is so precise that an Accuwedge isn’t necessary. ArmaLite has an enviable reputation for manufacturing quality AR-type rifles and carbines along with the latest version of the original AR, the AR-10B.

Gun Details
The ISP had a set of requirements that they wanted met and ArmaLite’s response fulfilled the ISP requirement to a “T.” Specifically, the ISP required a 16-inch one-turn-in-nine inch twist to stabilize 5.56mm bullets from 55 grains up to and including the heavier bullets that range from 62 to 77 grains. The ISP also requested a chrome-lined chamber and barrel along with an exterior “step down” to allow the installation of grenade launchers. Because most officers now use optical sights, the upper receiver was to be the “A3” type with MIL-STD-1913 rail and a detachable carry handle. Once again, officers may be required to wear body armor or other gear that requires different lengths of pull, not to mention compact external configuration for carry in the always crowded cruiser trunk or in a front seat mount, so a six-position collapsible stock was specified. Finally, the ISP is configured with a single-stage trigger. The commercial model version of the ISP, the LEC15A4CB, is configured with a tactical two-stage trigger..