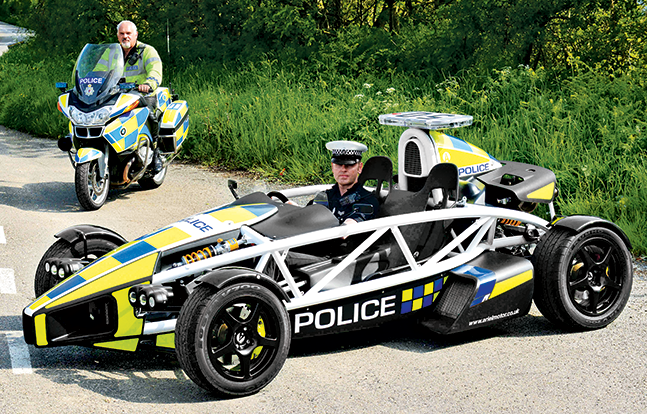 1 of 3
The Atom PL1 Is the World’s Fastest Police Car
Final touches for the PL1 include police livery and pursuit lights. 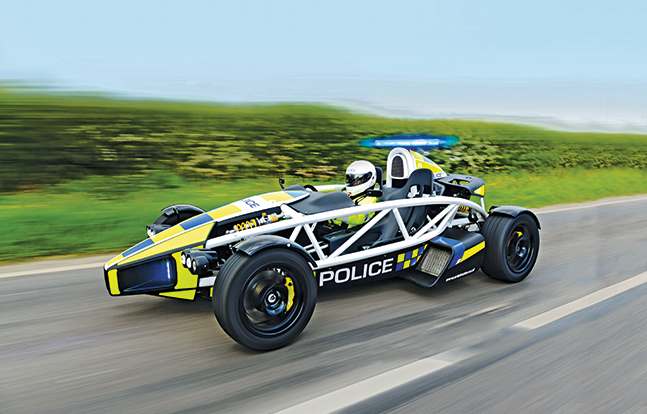 2 of 3
The Atom PL1 Is the World’s Fastest Police Car
Not your average police cruiser, the Ariel Atom PL1 has a top speed of 155 mph and unmatched acceleration to catch every speeder on the road. 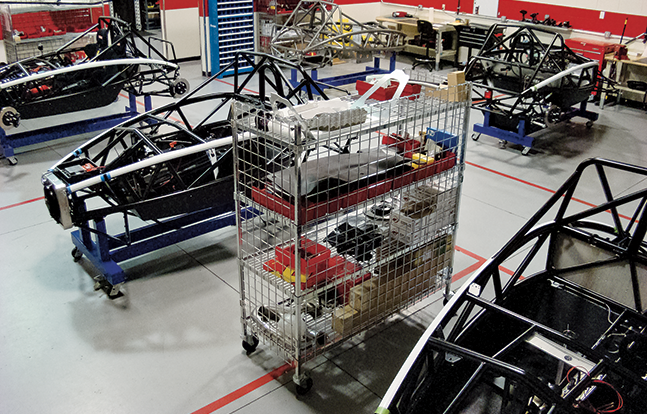 3 of 3
The Atom PL1 Is the World’s Fastest Police Car
TMI AutoTech builds Atoms from the ground up for U.S. customers. 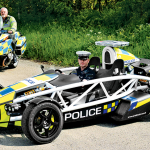 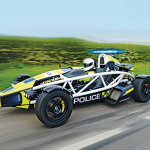 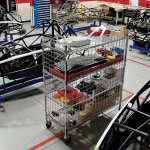 Highway drivers who push the speed limit are always on the lookout for big, powerful police cruisers festooned with flashing lights and sirens. Soon, however, thanks to the Avon and Somerset Constabulary (A&SC), the regional police force covering southwestern English counties bordering Wales and encompassing the city of Bristol, a new police vehicle will be capable of leaving even the fastest speeders in the dust.

One June 8, 2014, the A&SC unveiled the new Ariel Atom 3.5R, a 350-brake-horsepower, high-performance sports car that is street legal even though it looks similar to an open-wheel formula racer. According to Simon Saunders, the founder and owner of the Ariel Motor Company in Crewkerne, Somerset, UK, the police version of the Atom—the PL1—is basically stock, but it sports unmistakable police livery, Hella aerodynamic pursuit lights and emergency gear.

The Atom PL1 looks intimidating, but the real story is its performance: It can accelerate from 0 to 62 mph in 2.5 seconds! Weighing in at just under 1,350 pounds, the Atom’s top speed is 155 mph. The car, which holds the lap speed record on the popular BBC TV show Top Gear, can outrun all other high-speed vehicles in European police service, including the Italian Lamborghini Gallardo LP560-4 Polizia, the German Audi R8 GTR, and even a Ferari FF on the force in Dubai. All of these are enclosed-cab sports cars with price tags from two to four times the $56,500 cost (plus options) of the Atom in the U.S.

“The Atom PL1 looks intimidating, but the real story is its performance: It can accelerate from 0 to 62 mph in 2.5 seconds!”

The real purpose of the Ariel Atom in police service will not be running down speeders but promoting the constabulary’s new Safe Rider program throughout the summer months. Taxpayers need not complain, however, since Saunders loaned the vehicle without cost to the police to draw attention to highway safety, safer riding and the statistics involved in motorcycle accidents. Motorcyclists are 35 times more likely to die in road collisions than other drivers. In the constabulary’s jurisdiction alone, seven motorcyclists died in accidents in 2014, up 30 percent over last year. Motorcycle road deaths are up 20 percent nationwide. Sergeant Andy Parsons, the constabulary’s program leader, said, “I am really excited that Ariel has joined with us to bring Project Safe Rider to fruition, and I hope that the use of the Ariel PL1 will … help us to reduce road deaths and serious injuries within the motorcycling community.”

“The Atom is capable of similar performance to large superbikes and can in fact outperform them, so it is a useful tool to engage motorcyclists as well as car drivers,” Saunders explained.

“We are also about to launch an all new Ariel motorbike, so we want to reinforce the message that the police are trying to spread,” Saunders continued. “Motorcyclists are particularly vulnerable in accident situations, regardless of whether it is their own or someone else’s fault.

“The Atom is a car of extremely high performance, and to get the best from it, particularly on track, we advise instruction,” added Saunders. “This not only makes you faster but safer. Exactly the same is true of motorbikes, and there is no doubt that a trained rider is a safer rider. So this campaign isn’t about killing anyone’s enjoyment—our motto is in fact ‘Serious Fun’—but being able to ride and drive safely and within your limits. We’re not against going fast or indeed having fun—motorcycles are one of the last bastions of this—but it’s about the right time and the right place. I guess part of our message is have fun, but don’t be a statistic. There’s zero fun in the latter.”

Saunders started Ariel in 1991 after working as a designer for Porsche, Aston Martin and GM and has enjoyed tremendous success despite the company’s small size. His annual production numbers about 100 vehicles per year, and his sales have been global. Ariel models are available in the U.S. from TMI AutoTech, Inc., based in Alton, Virginia, near the Virginia International Raceway. Mark Swain, the vice president of sales and marketing for TMI, notes that his company builds Ariel designs from the ground up for North American consumption.

“The Atom is designed for road and very high speed use on the track, and it has the ability to perform on a variety of levels,” Saunders said. “The car is equally at home going around a track or sitting in traffic in a city center, so it’s adaptable to any situation, including speed control. In the UK, its main role is to engage motorists in a friendly rather than a confrontational way and engender discussion and thoughts about riding and driving safely. I guess if we can make people stop and think, take some training and save some lives it will have done its job.” 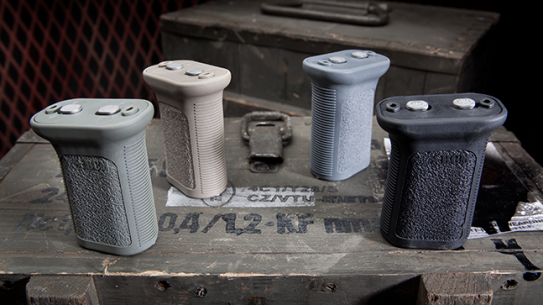 Keep your AR ergonomic and accessorized in the field with these rails and grips!