59
SHARES
948
VIEWS
Share on FacebookShare on Twitter
The MRAD’s primary role as a 1,500-yard-plus sniper rifle is just the beginning of its capabilities. It is a switch-barrel system that allows a five-minute change to either .300 Win Mag or 7.62mm NATO, which will be available soon.

When the United States Special Operations Command (USSOCOM) published their Performance Specification for the Precision Sniper Rifle (PSR) on December 16, 2009, a number of companies stepped up to the challenge to design their versions of the PSR. Well versed in manufacturing a dependable sniper system for the U.S. military, Barrett has unveiled their Multi-Role Adaptive Design (MRAD) to compete for the coveted government contract.

Completing the first stage of the military firearms’ trial in April 2010 is an acknowledgement of the MRAD’s performance capabilities. Meanwhile Kyle Lynch, Barrett’s director of Sales and Marketing provided me with a tour of Barrett’s facility and allowed for testing of their MRAD.

Gun Details
The MRAD was specifically developed to meet the needs of the PSR program. The PSR encompasses a set of requirements by USSOCOM, which states that the current system mission of the PSR is to enable USSOCOM snipers to use one or more shots to interdict enemy personnel, positions, and non-technical vehicles mounted with crew-served weapons out to 1,500 meters or further, while being capable of defeating NIJ Level III body armor out to 900 meters. 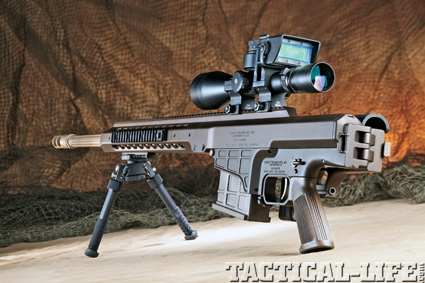 A 21″ top rail is roomy enough for a scope and a night vision optic. The shorter rails on the bottom and sides are user adjustable. The MRAD tested for this article was was fitted with a Leupold Mark 4 mil dot scope. A B.O.R.S. range-finding device is fitted to the top of the optic shown.

Other parameters encompass length, weight, magazine capacity, penetration of the projectile, the ability to mount night vision devices and other accessories. The program also specifies thresholds and objectives, as the PSR has to meet all performance thresholds and as many of the objectives as possible to score well. To get an idea of what the MRAD is all about, a review of the USSOCOM Performance Specifications for the PSR tells the story. The major components of the PSR “shall include a rifle, ten magazines, sound suppressor including mirage mitigating device, operator manual, sling, cleaning kit, bipod, drag bag and a hard carrying case.” The PSR is specified to be no longer than 50 inches fully extended without suppressor, with the ideal set at 40 inches overall. With the stock folded, the maximum length is 40 inches, with 36 inches set as the objective of USSOCOM. The threshold weight for the weapon with a Mil-Std-1913 rail and a 10-round unloaded magazine is 18 pounds, and the objective weight is no greater than 13 pounds. The MRAD submitted for the PSR trial was fitted with a 24.5-inch barrel, and weighed 14.8 pounds without an optic. Lynch added, “the threshold was 18 pounds, so we were well below that.” 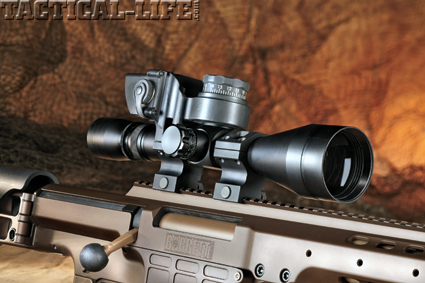 The MRAD tested for this article was was fitted with a Leupold Mark 4 mil dot scope. A B.O.R.S. range-finding device is fitted to the top of the optic shown.

4.5-inch fluted version. “We will have a 20-inch and a 24.5-inch version in .338 Lapua,” Lynch said. “We’ve built barrels from 18 inches to 27 inches and found that there are certain lengths where we find a sweet spot for velocity. We found that as you go down from 27 down to 24.5 you don’t lose very much velocity, but going down to 22 inches you lose a significant amount. To maintain the supersonic performance at 1,500 meters, you need the 24-inch barrel length.”

According to the PSR specifications, the “rifle shall incorporate an adjustable stock for length of pull adjustments, and adjustable cheekpiece that shall provide adequate adjustment to allow for eye alignment with optics. The PSR rifle shall accommodate a quick method to decrease the overall length of the stock for tactical carry/enhanced portability without separating the action from the stock…” The MRAD accomplishes these thresholds with a monolithic chassis with a 30-MOA taper Mil-Std-1913 rail that measures 21.75 inches, which offers plenty of space for in-line night vision devices. Side and bottom rails allow for mounting a number of other accessories.

Two configurable 4-inch Mil-Std-1913 rails and an 8-inch rail, all of which can be mounted along the 3, 6 and 9 o’clock surfaces on the forward part of the upper receiver. The bottom of the buttstock also has a Mil-Std-1913 rail for mounting a monopod. 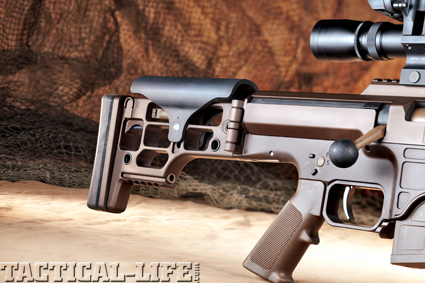 The folding stock locks over the bolt handle to keep it secure during rough handling, like paratrooper jump operations. Folding to the handle side also reduces total width. 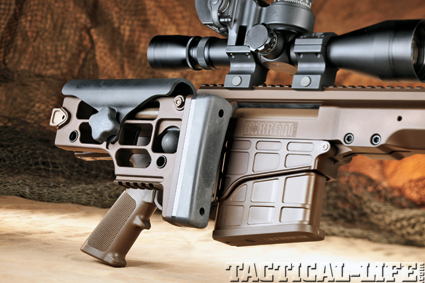 The MRAD’s stock is foldable for enhanced portability, yet locks in as solid as a fixed-stock rifle. This creates a rigid platform for consistent firing. When folded, the stock latches around the bolt handle for added security during transport. Because the stock folds to the bolt handle side of the action, the rifle is the same width overall, folded or extended. Made of a temperature-resistant polymer, the adjustable cheekpiece also offers a consistent rifle-to-user contact point. The rifle’s length of pull can be set to five different positions with the push of a single button.

“An advantage to the MRAD’s folding stock is that it locks the bolt handle down, which secures the gun and keeps dirt out of the bolt,” Lynch said. “It also reduces the width of the weapon with the stock closed. With sniper weapons that have a folding stock that folds to the other side, you have the width of the bolt handle plus the receiver and the stock. All that’s required to deploy the stock is to pull it open. There’s a polymer coated spring that is used as a keeper to capture the bolt knob to hold the folded stock in place.” The stock also has integral sling bushings in two positions to offer the user different location choices. This weapon is designed to survive in free-fall parachute operations without a case. 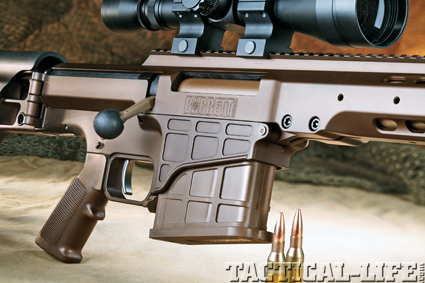 The .338 MRAD’s mags will hold 10 rounds of this powerhouse cartridge.

Caliber Modularity
One of the objectives of the PSR is caliber modularity. The .338 Lapua Mag is the most widely used cartridges by militaries around the world that meet the PSR’s cartridge ballistic requirements.

The MRAD rifle’s user-changeable barrel system is just one example of this hard working gun’s modularity. Its design paves the way for future caliber interchangeability, with barrels chambered in .300 Win Mag and 7.62mm NATO by mid-2011.

The MRAD also boasts Barrett’s new trigger module that is easily accessed for maintenance, adjustment and replacement. This is a match-grade trigger that is adjustable from 3 to 5 pounds of let-off. “In an earlier sniper competition, part of the event landed a helicopter 10 feet from one of our 98Bs,” Lynch recalled. “There was so much dirt in the trigger mechanism that the sear wouldn’t drop. We learned from that experience and designed the new trigger for the MRAD, as well as the 98B. We’ve filled the MRAD with so much dirt that you can’t close the bolt, shook it out and the trigger still worked without fail.” The trigger on the test gun was 3 pounds, but is adjustable from 2.5 to 3.5 pounds.

An ambidextrous magazine release, located between the front of the triggerguard and the magazine well, drops empty magazines free while retaining the firing hand’s finger grip.

“The first run of PSR trials was April 2010, and tested for the threshold requirements to make sure rifles submitted warranted further testing,” Lyle said. “The preliminary information that we’ve received is that the MRAD is one of a few submitted guns that performed very well. We’ve received almost universal comments that the gun is outstanding in its simplicity from shooters who have spent time with the MRAD.”

The finish on the stock is 7000 series Mil-Spec 3 hard-coat anodized aluminum in Barrett Multi-Role brown. The steel components are coated with a proprietary rust preventative coating. The pistol grip is a standard A2 grip. The bolt assembly slides inside a polymer sleeve, which removes the need for lubrication. 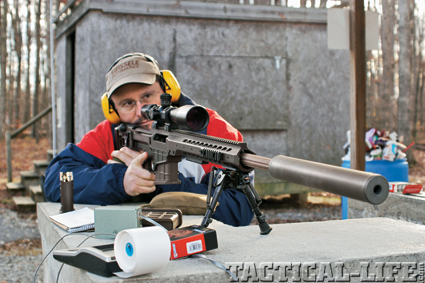 Range Time
The best ballistic performance from the .338 Lapua is achieved with the 300-grain Scenar bullets, so that’s what was tested. The time allowed for testing was all too brief. After firing 10 rounds across a Shooting Chrony chronograph, I quickly set up a 100-yard target and fired four 5-shot groups. The best group measured 1.004 inches. The other groups had called flyers that opened them up beyond MOA, but the other four shots in each group formed nice little clusters that averaged a 0.50 of an inch. Moving out to 300 yards, the MRAD really shined. I fired three sub-MOA groups, with the best measuring 1.59 inches.

Many of the manufacturers that are involved in the PSR program trials approach the design challenge from several different angles. “Some designs are more complex and have more adjustment than are called for,” Lynch said. “Some designs are very simple, while others are more elaborate and complicated. The beauty of the MRAD is its simplicity. It has the fewest moving parts and screws to replace. And much of that is due to its monolithic design. In other designs, there are as many as 30 screws that have to be removed to change the barrel. To change calibers with the Barrett MRAD you only have to remove two cross bolts with a simple hand tool and remove and replace the barrel and bolt head. All of this can be done in less than five minutes.”

No matter the outcome of the PSR trials, Barrett’s MRAD is a proven ultra-range tack driver with the power of a sledgehammer. It will find popularity in military, law enforcement and sporting circles. The first models will be available by March, and the multi-caliber kits will follow by mid-year 2011. Find out more by visiting barrett.net or calling 615-896-2938.