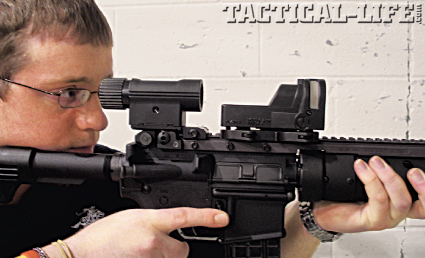 Reflex optics play a big role on the modern battlefield. No longer do we have to line up our iron sights in order to effectively engage the threat. Reflex optics are designed as a point-and-shoot device that allows the shooter to keep both eyes open during an engagement. They provide a parallax-free field of view, where the shooter can simply put the aiming point on the target and fire. This proves to be a valuable asset in the time that it takes to effectively acquire and engage a target and does not limit the shooter’s field of view. 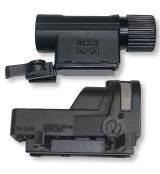 Reflex optics are also known as “red-dot” sights, which is a generic term assigned to the genre. They do not necessarily have to utilize red as the color, or a dot for that matter. Reflex optics either have a self-illuminated aiming point or it is illuminated by a battery-powered external power source. The important thing when choosing a reflex sight is that the aiming point is bright enough to be distinguished from the target area and it is of appropriate size to engage a target without hindering the weapon platform’s maximum effective range.

IDF Mepro 21
The Mepro 21 Tritium Self-Illuminated Reflex Sight is manufactured by Meprolight, who is headquartered in Israel. They are a principal supplier for the Israeli Defense Forces and other government agencies of their nation. They pride themselves in the fact that they work closely to refine their products based on field usage and reports.

Meprolight produces everything from reflex sights to thermal and night-vision optics. Within the United States, Kimber Manufacturing Inc. is the exclusive importer and distributer for their products for both the military and civilian sales, and they in turn supply several distributors around the nation.

The Mepro 21 weighs in at roughly half a pound, which is about the same as the other reflex sights of the same size. The unit is approximately 4.5 inches long and 2 inches wide, and it utilizes a 30mm objective lens for target acquisition. The Mepro 21 is a day/night reflex sight that utilizes both fiber optics and tritium for a constant aiming point, which can be several shapes dependant on customer preference. The one sent to TW for testing is the Open X and has a 5.5 MOA aiming-point diameter.

Functionality
Out of the box, it looked like a cross between a holosight and reflex sight. I’ve used Eotech’s Holosights, Trijicon’s Advanced Combat Optical Gunsite and Aimpoint’s CompM2/M68 Close Combat Optic, both in combat and training scenarios. So I have had some practical experience with these types of optics. One unique thing about Mepro 21 is the lack of a full-length tube comprising the body of the optic. The optical viewing area sits towards the front of the unit and looks more like a holosight than that of a traditional reflex. The Mepro 21 also has its windage and elevation adjustments on the side and top of the unit, which is pretty much standard. This makes it easy to perform adjustments from whatever shooting position is utilized. The one thing that’s impressive about this sight overall, is how bright the aiming point is considering its lack of batteries.

Most reflex sights use tritium gas, which is housed inside of the unit, to power the aiming point without the use of batteries. The issues that you run into with this power source are: 1) it decays over time and dims and 2) it is more difficult to see the aiming point in bright light. To negate these issues, the Mepro 21 also utilizes fiber optics to channel light to the aiming point and make it more intense in bright-light conditions.

Operator Friendliness
TW fit the unit onto a PRI 6.8mm upper receiver. The Mepro 21’s base clamps onto the rail with two secure throw levers. Keep in mind that the Mepro 21 has been around for a few years now and has been in use by both military and law-enforcement entities. The simplistic design and ease of use is focused towards the tactical environment. The unit is designed to match just about every optical rail that is manufactured. I have never been a fan of the throw lever-style bases because I have had many fail in the past, but there were no issues as I was shooting with regards the bases coming loose. You are able adjust the tension with two nuts on the opposite side.

Testing was done from 25-to-100 meter targets and I had no problems identifying the Open X aiming point in comparison to the target, even while engaging multiple targets at varying distances. The eye relief is infinite but I liked the fact that it isn’t a full-length tube, as the other sights I have become accustom to using.

The Mepro 21 also came with the MX3, which is a 3X magnifier that is designed to intensify the magnification with the reflex sight. The idea is to create a magnified sight picture that will help the shooter more easily identify the target and increase precision fire on the battlefield. It is a good concept, but it doesn’t work as well as it should. Eye relief is an issue between the eye, magnifier and the optic. The aiming point tends to become blurry and it is just not as effective for precision shooting.

Test Report
Overall, the Mepro 21 performed well and is comparable to the Aimpoint CompM2/M68 CCO and Eotech Holosight. Each of these optics have been proven in combat by both our forces and the IDF. The features on the Mepro 21 make up for the $100 or so price difference. It does the job with a bright enough aiming point, no battery to have to replace, and a low profile with a sufficiently sized viewing area.

I would hold off on the MX3 attachment, however. It is a good idea in theory, but is not practical for a tactical setting. If you need magnification for the mission, I would go with an optic designed specifically towards precision engagements and keep the reflex sight for use in its optimal mission.

Reflex optics play a big role on the modern battlefield. No longer do we…