Beyond the .223: Alternative Cartridges for the AR Platform | Roundup

I think it’s safe to say that the AR-15 is the most popular centerfire rifle in America today. By far the top cartridge for this gun is the .223/5.56mm NATO. It dominates the rifle, but the list of available cartridges for the AR-15 is pretty extensive. Of course, you can find the rifle in rimfires like the .22 LR or the .17 HMR, but it’s a centerfire gun at heart. Here is a look at some of the cartridges other than the .223 you can find in the AR platform.

.17 Remington: When this cartridge was introduced in 1971, it was the fastest thing anyone had seen. With Remington factory ammo, a 25-grain hollow-point bullet has a muzzle velocity of 4,040 fps, while the newer 20-grain AccuTip load is flying at 4,250 fps. Bullet impacts at this kind of velocity turn predators into puddles.

.204 Ruger: The .204 Ruger is currently the highest-velocity centerfire rifle cartridge in production by a major ammo-maker. Hornady originated the cartridge and has the load with the fastest muzzle velocity. It’s a 24-grain NTX bullet with a muzzle velocity of 4,400 fps. The 32-grain bullets run about 4,200 fps, and the 40-grainers move out at 3,900 fps. Hornady also has a 45-grain bullet with a muzzle velocity of 3,625 fps. My AR in .204 Ruger has a 24-inch barrel. It will put most bullets into less than 0.5 MOA, and it absolutely wrecks coyotes.

5.45x39mm: The 5.45x39mm was Russia’s answer to the 5.56mm NATO and was developed in 1974 for use with the new AK-74 rifle. Hornady, Wolf and TulAmmo all offer newly manufactured expanding-bullet ammo. Wolf and TulAmmo have 60-grain HP bullets with a muzzle velocity of 2,960 fps. Hornady loads a 60-grain V-MAX at 2,810 fps. All of these loads use a Berdan-primed, non-reloadable steel case. 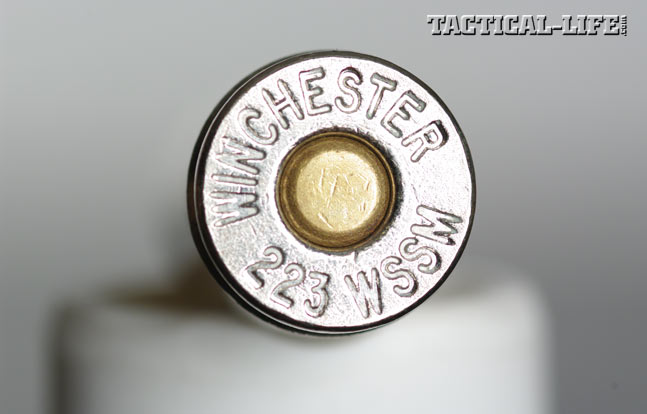 The .223 WSSM has the potential to be the best predator AR cartridge. Factory loads drive a 55-grain Ballistic Silvertip bullet at 3,850 fps. The 64-grain load has a muzzle velocity of 3,600 fps and will work for antelope and even deer.

6.5 Grendel: Invented by Bill Alexander from Alexander Arms, the 6.5 Grendel is designed for precision long-range target work. But it’s proven to be a good hunting and defense cartridge as well. Alexander Arms, Hornady and Wolf offer ammo. Bullet weights generally run from 120 to 130 grains.

The popular Hornady ammo is available in two 123-grain bullets: the A-MAX for targets and the SST for hunting. The muzzle velocity is 2,580 fps from a 24-inch barrel and 2,350 fps from a 16-inch barrel.

6.8 SPC: The 6.8 SPC has a checkered history and as far as I can tell, there are currently four different chamber designs for the cartridge. 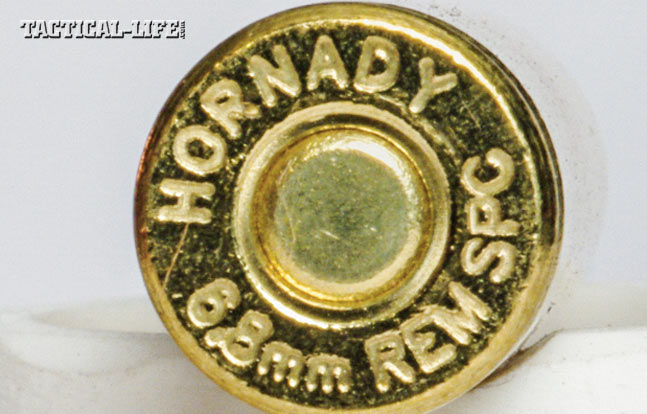 It uses a .277-inch bullet, the same as the famed .270 Winchester. The Hornady load with a 110-grain V-MAX bullet has a muzzle velocity of 2,550 fps from a 16-inch barrel. The company also loads a 120-grain SST bullet at 2,460 fps from a 16-inch barrel. Remington, Silver State Armory, Wilson Combat and others have other ammo available with a wide range of bullet options.

300 AAC Blackout: The 300 AAC Blackout, or 300 BLK, is in vogue right now, and just about everybody is jumping on the bandwagon. It was originally developed by J.D. Jones to use with heavy bullets weighing 200 grains or more, running subsonic and suppressed. He called it the .300 Whisper. AAC reintroduced the cartridge as the 300 Blackout. With a lighter, supersonic bullet like a 125-grain at 2,250 fps, it is getting a lot of interest as a defensive and hunting round. While there are those who will no doubt write letters of disagreement, I am not a huge fan of this cartridge for deer or hogs, but for smaller game or home defense, it is excellent.

.30 Remington AR: This necked-down .450 Bushmaster cartridge provides ballistics that are similar to the .300 Savage. The muzzle velocity for a 125-grain bullet is 2,800 fps, and it runs at 2,575 fps for a 150-grain bullet. The new Remington Hog Hammer load has a Barnes 125-grain TSX bullet with a muzzle velocity of 2,800 fps. This is the highest-performing .30-caliber cartridge in commercial use in the AR-15 rifle.

.300 Olympic Super Short Magnum: Olympic Arms developed a .30-caliber cartridge by necking up the WSSM case. The company is reporting a 3,040-fps velocity with a 150-grain bullet. That means the cartridge is outperforming the .30-06, from an AR-15 rifle. This is a proprietary cartridge available only from Olympic Arms.

7.62x39mm: This is the cartridge that made the AK-47 famous. It’s been around in AR-15-type rifles for many years. The 7.62x39mm has a 125-grain, .311-inch bullet with a muzzle velocity of 2,365 fps from a 24-inch barrel. This makes it adequate for deer hunting if quality soft-point bullets are used. Of course, its pedigree as a battle round is well documented. 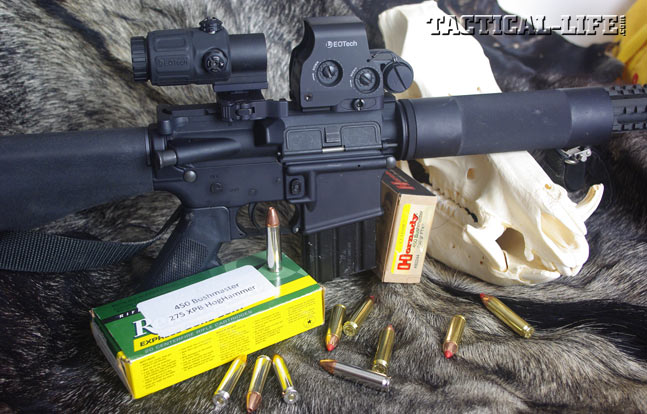 .450 Bushmaster: This is a big-bore cartridge designed for big-game hunting. It delivers a 250-grain Hornady bullet out the muzzle at 2,200 fps. Hornady and Remington both have ammo, and Bushmaster offers rifles.

My favorite load is the new Remington Hog Hammer. That’s because it features a Barnes 275-grain XPB bullet with a muzzle velocity of 2,175 fps and generating 2,758 foot-pounds of muzzle energy. I shot a truckload of hogs with it this year as well as a three-quarter-ton water buffalo. I was extremely impressed with the performance of this load.