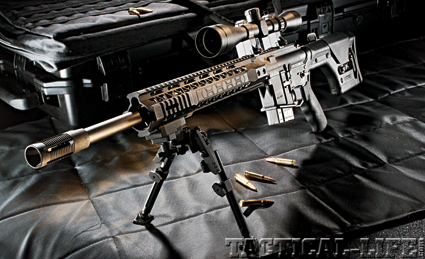 When the SASS (Semi Automatic Sniper System) was originally developed as a 7.62x51mm NATO rifle for the U.S. Military. Its intended purpose was to provide a reliable semi-automatic precision rifle in a familiar platform that could be issued on a wider basis. While the bolt rifle has its place, our current area of operation is not always conducive to the lower rate of fire and magazine capacity. It also requires specialty training, as it is a completely different platform. By using what is easily the most familiar rifle platform our troops have, the train-up is far less. There was also the added benefit of magazines and other interchangeable items in inventory from the Mk 11 Mod 0 project.

Although a typical SASS-style rifle is probably not as pinpoint-accurate as a bolt gun, it is pretty close. Semi-automatic precision rifles have come a long way, and there are several solid versions inspired by this rifle in various chamberings. Priced comparably with many other AR-type rifles that yield precision accuracy, they have become truly versatile systems. It really has opened the platform up to the police world, a world where the semi-auto sniper rifle is still quite rare. 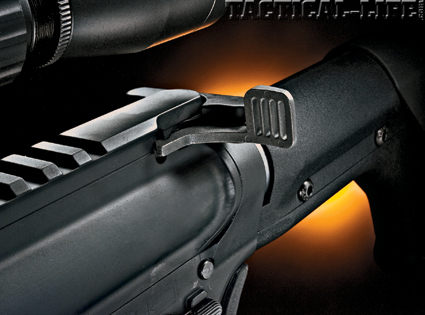 Scoped AR type rifles like the
SASS really need an extended charging handle to work properly, allowing it to be operated around the optics.

For many years the police classes involving precision rifles were almost completely bare of any semi-automatic platform. You would see an occasional M21 or M25, but they are heavy, and took some real knowledge and work to keep accurate in the police environment. Despite some perceived similarities, the police marksman’s world is very different then that of the military sniper. Seldom is a second shot required, it is really that first shot out of the barrel that is critical. What follows if necessary must be in the same basic spot with little change, and must be reliable. There is also the need to change to barrier rounds if a threat presents itself through glass. Early on, many AR-type rifles were either not consistently accurate or had a significant difference between the first round and each subsequent round. They also could have some difficulty feeding polymer-tipped or flat rounds, both being the most common barrier rounds seen in the police world to this day. It really kept them out of the mix, and for many it still does. The cost factor also came into play, as viable semi-automatic platforms are almost invariably more expensive—something that is always an issue for police departments. That game has changed a bit. Costs have come down, quality has grown exponentially, and more importantly, other calibers have entered the mix. 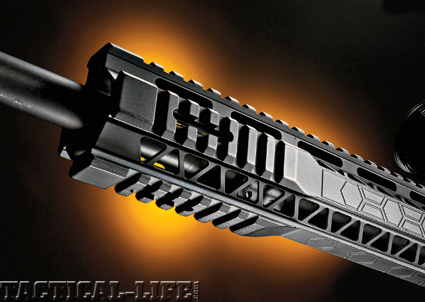 The high-quality quad rail is perfectly suited to this rifles mission. There was plenty of rail space for accessories yet a nice soft area for precision hand holds from positions other than prone.

For years those agencies that operate exclusively in an urban environment have looked for an alternative to the 7.62x51mm round. Urban police agencies often operate well inside the 100-yard mark, with the vast majority of deployments seldom reaching past 50 yards. This means that what their weapon does at even 300 yards is pretty meaningless. They are far more concerned about over-penetration and incapacitation than long-range accuracy. For all the dials and knobs that get turned at training, they are seldom touched on deployments. There were some early attempts at a move towards the 5.56mm, but even with the correct bullet they can still have under penetration issues. They need to make it through to the vital areas, and the 5.56mm will not always do that, especially for those of us that operate where winter actually includes below-zero temperatures. The real solution was an intermediate cartridge with the same accuracy. Several have been offered, but the one I think has some of the most promise is the 6.8 SPC. Black Rifle Company is building a SASS version that just may fit the bill for many.

Gun Details
Black Rifle Company (BRC) was founded in 2009 in the beautiful Northwest in Clackamas, Oregon. They have been supplying billet uppers and lowers for some time, but are now building complete rifles. As a custom riflemaker, their systems can be configured as needed, but they are priced very competitively. 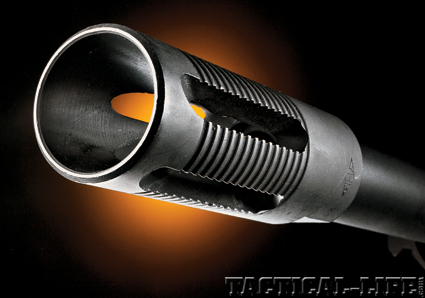 The rifle provided for testing was a SASS rifle chambered in 6.8 SPC. As it was removed from the box the quality of the build was evident — this was not a cookie cutter rifle. They start with their own billet upper and lower receiver. Both are 7075-T6 aluminum and are hardcoat anodized and ceramic-coated. The upper receiver contains an 18-inch stainless Isonite QPQ Nitro Carburized barrel. This is a process being used more and more often on rifle barrels these days. It provides better durability and corrosion resistance than chrome-plating, additional heat-resistance and a nice uniform black appearance. Every rifle tested so far using this process has worked incredibly well. The barrel is mounted under a BRC MQR (modified quad rail) measuring 13 inches. It provides for a thin un-railed surface for comfortable shooting, yet provides all the rail space you would need to add any sort of accessories.

A mid-length gas impingement system is used for reliability. A stainless steel bolt carrier is used with hand-polished rails for consistency and reliability. The bolt has been magnetic particle (MP) tested to assure it will handle the pressures associate with a rifle. The lower utilizes an oversized triggerguard that includes a Geissele Super Semi-Automatic Enhanced (SS-E) Trigger. The package is rounded out with a Magpul PRS stock and an ERGO Grip. 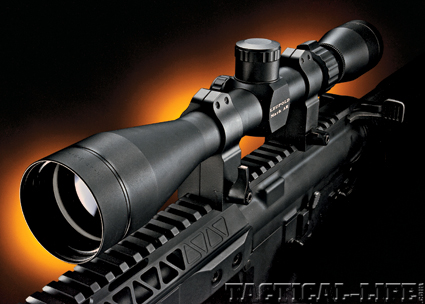 Leupold’s Mark AR scope is very simple, lightweight and well suited to just about any tactical environment. The glass is clear and the mil-dot reticle remains a favorite of many operators.

This particular rifle came equipped with a Leupold Mark AR scope, which utilizes ½-MOA adjustments for both elevation and wind. It allows for the addition of custom BDC reticles, and is simple, reliable, and the glass is very clear. This particular scope included a Mil-Dot reticle. The Mark AR line of scopes are held to the same standards as the Mark 4 making it perfectly suited to tactical use. The rifle was packed in a black nylon rifle case and included one Precision Reflex, Inc. (PRI) 10-round magazine. The only addition from me was a 25-round PRI magazine and a bipod. 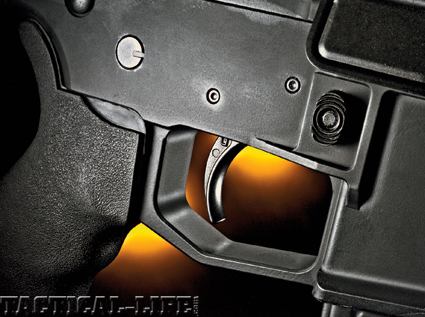 The billet lower allows for a true tactical triggerguard to be utilized, with plenty of room for gloved hands.

Shooting Impressions
Given the build as a SASS rifle it was tested as an urban police precision rifle or DMR (Designated Marksman’s Rifle). The rifle was loaded into my Eberlestock G4 Operator Pack and deployed as it would be in a police environment. Once break-in and zero was completed, it was time to try some cold bores. Over the course of two range days there were four cold-bore shots, all hitting dead center. The follow-up shots were all clustered well under an inch. There really did not seem to be much difference between the first and last shot. The round it seemed to like the best was the Silver State Armory 115-grain OTM. With that round this rifle was as accurate and reliable as my DMR in .308, and at about half the price. 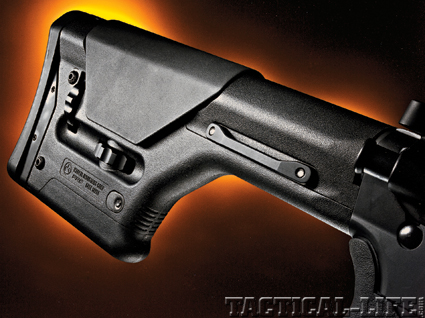 The Magpul PRS stock is still one of the best stocks you can get for an AR-based precision rifle—easily adjustable and very stable for optimum accuracy.

Recoil with this round is about non-existent, especially in this configuration. It is one of the advantages of the round; you can pretty much watch your hits when shooting from prone. The PRS stock made it comfortable and the scope made it simple. The Geissele trigger was fantastic although my preference is a two-stage. It is crisp, reliable, and predictable—providing for some excellent accuracy. The best group was with the Silver State Armory 115-grain OTM measuring 0.38 inches. Most of the rest of the ammunition made it at or around an inch or so with the Hornady 110-grain BTHP right under half an inch. The widest group was with the 110-grain Nosler bonded at 1.25 inches. It had no difficulty feeding any of the polymer tipped rounds and did not suffer any malfunctions with the 10-round magazine provided or the 25-round PRI from my inventory. 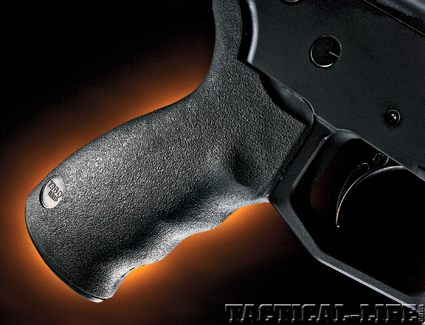 The package is rounded out with an ERGO Grip.

Final Thoughts
Black Rifle Company has put together an excellent SASS rifle—I would not hesitate a second to run this gun on deployments. It was accurate, had a predictable and consistent cold bore shot, and was very reliable. It is about as accurate as this platform gets, especially with ammunition that is not match grade. My testing with Silver State Armory seems to generally yield match grade accuracy with most rifles, but it is not truly match-grade, just well made. Given a true match load, or a personal load, this thing will be a same holer for sure. With a retail price of $1,699 (without the scope and rings) it is incredibly well priced. It shoots on par with rifles over twice the price that are not any better built. If you are looking for a truly accurate 6.8 in the SASS configuration, make sure to give Black Rifles a close look. 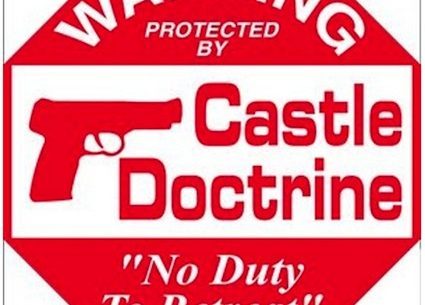