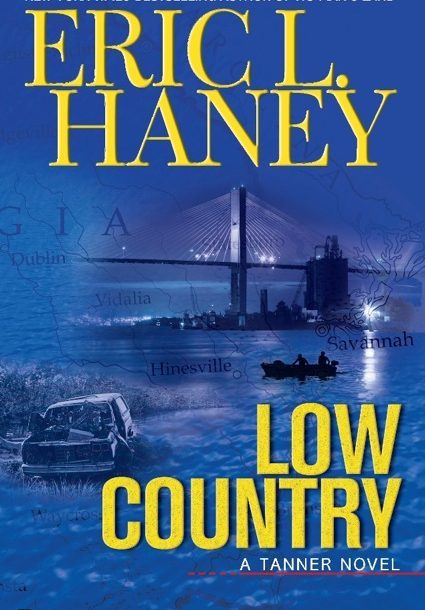 From the producer/writer of CBS’s series The Unit and bestselling author of Inside the Delta Force, Eric L. Haley, comes the follow up to No Man’s Land.

Low Country picks up where No Man’s Land leaves off with Tanner returning to his Savannah, Georgia home on the 56-foot fishing vessel, Miss Rosalie. Hoping for some downtime to simply relax and maintain his boat, Tanner is instead faced with the discovery of a young girl’s body that has either jumped or been thrown from Savannah’s Talmadge Bridge. Seeking to help the girl’s mother learn the truth about her daughter’s death, he soon finds himself embroiled in the corrupt and drug-addled world of the South Georgia sex trade.

Tanner’s background is never explicitly revealed to the reader, but in this and the previous novel, we learn he possess both a strong moral compass, and a dark past. While methodical and conscientious, he is neither afraid of confrontation nor cowered by threats. In Low Country, Tanner sees a close friend murdered, and the young exploited setting up a series of blurry choices that test his cunning, humanity…and the aim of more-than-a-few rounds from his CZ 75 9mm pistol.

Haney’s fast-paced writing style keeps the pages turning and his details are colored by a life served in the U.S. Army’s Rangers and as a Delta Force operator. Paired with rich Southern support characters, including six-foot, auburn-haired Detective Patricia Latham and a prescient Geechee medicine woman named Miss Cyriah, Haney weaves an action-packed story amongst the vines and Spanish moss of the Savannah’s salt marshes and scrub pine.